Accurate measurement of pain perception in individual non-human patients is impossible. However, management of pain requires objective measures of effectiveness of the applied treatment.

Accurate measurement of pain perception in individual non-human patients is impossible. However, management of pain requires objective measures of effectiveness of the applied treatment. This paradox of pain management underlies much of the frustration associated with clinical management of pain and creates the opportunity for ineffective treatments to be supported by "scientific" studies. As a veterinary care provider treating patients likely experiencing differing intensities of pain, it is important to understand the pros and cons of pain assessment methods and utilize a critical anthropomorphic evaluation and treatment of postoperative pain.

Animal behaviour differs between species, between individuals of the same species, and even within the same individual over time and with different environmental influences. Creating a rapid and simple method for evaluation of pain perception is unlikely. However many clinicians advocate the use of pain scoring to measure treatment effectiveness to prevent the unnecessary suffering of feline patients. The most useful approach to clinical treatment incorporates some of our own human experiences and feelings (anthropomorphic) but modifying those expected feelings based on knowledge of feline behaviour and physiology. While not scientifically rigorous, this critical anthropomorphic approach incorporates our knowledge of pain in humans with our understanding of how we expect animals to react to noxious stimulation to clinically guide our treatment of pain.

An important conceptual breakthrough in understanding pain physiology is the recognition that pain following most types of noxious stimulation is usually protective and quite distinct from pain resulting from overt damage to tissues or nerves. It plays an integral adaptive role as part of the body's normal defense mechanisms, warning of contact with potentially damaging environmental insults and initiating behavioral and reflex avoidance strategies. It is also often referred to as nociceptive pain because it is only elicited when intense noxious stimuli threaten to injure tissue. It is characterized by a high stimulus threshold, is well localized and transient, and demonstrates a stimulus-response relationship similar to the other somatosensations. This protective mechanism is facilitated by a highly specialized network of nociceptors and primary sensory neurons which encode the intensity, duration and quality of noxious stimuli and, by virtue of their topographically organized projections to the spinal cord, its location.

The physiologic component of pain is termed nociception, which is comprised of the processes of transduction, transmission and modulation of neural signals generated in response to an external noxious stimulus. It is a physiologic process that, when carried to completion, results in the conscious perception of pain. In its simplest form the pain pathway can be considered as a three neuron chain, with the first order neuron originating in the periphery and projecting to the spinal cord, the second order neuron ascending the spinal cord, and the third order neuron projecting to the cerebral cortex. On a more complex level, the pathway involves a network of branches and communications with other sensory neurons and descending inhibitory neurons from the midbrain that modulate afferent transmission of painful stimuli.

The descending modulatory system has been described as having four tiers. The final, and perhaps most important, site involved in the descending modulation of nociceptive information is at the level of the spinal cord. Just as dorsal horn processing is vital to the integration of ascending noxious input, its role in anti-nociception is equally crucial. Dense concentrations of GABA, glycine, serotonin, norepinephrine and the endogenous opioid peptides (enkephalins, endorphins and dynorphins) have been identified in dorsal horn neurons, and all produce inhibitory effects on nociceptive transmission. Specifically, the spinal opioid system fine-tunes descending control mechanisms by acting both presynaptically, as well as postsynaptically. Communication among dorsal horn neurons involves complex interactions, and it is now apparent that a single neuron may be influenced by many neurotransmitters, that each neurotransmitter may have numerous actions in a given region, and that multiple neurotransmitters may exist within a single neuron. Simply stated on a more global level, nociceptive processing is a three-neuron chain with dual input at each level. Discriminative and affective aspects of pain are transmitted in related, and yet distinct ascending pathways, with modifications made by both segmental and descending modulatory systems.

Enhancement of nociceptive signals is of major concern in patients with chronic or neuropathic pain. Just as with inhibition, when signals are enhanced there are many points in the nociceptive pathways that can participate and are potential targets for intervention. It is important to remember that chronic pain is often multifaceted and involves several different mechanisms. Successful treatment may be extremely difficult in some cases. Resolution of the underlying disease is often the best strategy for curing chronic pain; however, in many situations chronic pain management is palliative and quality of life is a major consideration when treating these patients.

Common analgesic drug classes such as opioids, NSAIDs, and local anesthetics have a role in chronic pain management. Their acute and chronic toxicity vary and should be seriously considered when selecting drugs for chronic administration. Nearly all drugs used for chronic pain management in feline patients will be used in an extra-label manner and their prescription should be preceded by owner education and written informed consent. Typically, patients will be prescribed one or more drugs with low toxicity first. If the treatment is ineffective additional adjunctive drugs are added and the potential for adverse drug interactions increase. Ultimately, chronic pain management is a n-of-1 clinical trial and each patient will require experimentation with different drugs to attempt to find a combination that make the pain tolerable, minimizes adverse effects, and maintains a good quality of life.

When concurrent disease is present the risks of pharmacotherapy may be considerably increased. The presence of renal or gastrointestinal disease is of particular concern since the traditional drug class used for chronic administration (NSAIDs) are relatively contraindicated. Thus opioids are often prescribed but may lead to altered behaviour and decreased owner compliance. These patients are usually candidates for complimentary therapies such as acupuncture and rehabilitation; however, feline patients may not have good results due to their innate behaviour.

Adjunctive drugs are typically used for the treatment of chronic pain. They have varying mechanisms of action and provide an opportunity for utilizing a diverse group of receptor types to treat pain that is refractory to traditional analgesics such as opioids and NSAIDs. There is increasing interest in the use of some adjunctive drugs in combination with opioids or NSAIDs for the multimodal treatment of acute pain. The safety and effectiveness of adjunctive drugs are generally not well studied in veterinary patients therefore responsibility lies with the veterinarian when they are used extra-label.

Gabapentin is an anticonvulsant that has been used for some time in human and veterinary medicine as an adjunctive treatment for neuropathic pain. Anecdotally, the drug appears effective in a limited number of individuals, but when effective can make a significant difference in the patient's quality of life. Oral administration of human-labeled capsules or liquids is most common. Oral bioavailability can vary significantly between individuals; therefore individual dose titration is often required. When terminating chronic administration, tapered reduction of the dose is recommended over several weeks.

Amantadine is a human-labeled anti influenza drug. Its other uses include treatment of Parkison's disease symptoms and chronic pain. It has analgesic effects mediated by NMDA receptor antagonism and anecdotally is effective for prevention and treatment of central sensitization. It is most commonly used in conjunction with NSAIDs for refractory cases of canine osteoarthritis.

Ketamine has been extensively used at sub-anesthetic doses as an adjunctive treatment for the prevention of chronic pain. Its use as a treatment of existing pain is limited due to lack of an oral formulation. It is commonly administered as a continuous rate infusion to patients during anesthesia or hospitalization. The main mechanism of action appears to be NMDA receptor antagonism. Ketamine also is a useful somatic analgesic which may be partially responsible for its usefulness in prevention of surgical pain. Adverse psychological effects of ketamine, and other NMDA receptor antagonists have limited their widespread use in human medicine.

Pregabalin (Lyrica) is a relatively new human product labeled for the treatment of chronic pain associated with diabetic neuropathy and postherpetic neuralgia. Its pharmacology is very similar to gabapentin. Use in veterinary patients has not been evaluated.

Tricyclic antidepressants such as amitriptyline have been used for treatment of chronic pain in humans. There use in veterinary patients is probably not as common as gabapentin and amantadine. Adverse effects of this class can limit usefulness, although generally they do not result in long term harm. Drug interactions are common with this class and should be monitored when multiple drug classes are administered.

Regenerative medicine is an emerging field where treatments for disease are focused on repair of tissue. Stem cell therapy is usually considered a component of regenerative medicine. Stem cell therapies have been available for veterinary patient use for several years. Most of the reports of effectiveness in dogs are anecdotal or via studies of limited design and scientific testing. Follow-up imaging or surgery of clinical patients for assessment of tissue repair has been limited for obvious reasons. Therefore, question still remains in most cases whether positive responses are due to tissue repair, generalized anti-inflammatory response to intervention, or a result of post-procedure rest and restrictions.

Whatever the mechanism, stem cell therapy does appear to offer benefits for some of the patients that receive treatment. Clinical experience would suggest that not all patients will respond favorably. Those that do range from mild transient improvement in function and quality of life to near full relief of clinical signs associated with chronic degenerative joint disease. When offering stem cell therapy as an option the clinician should provide a realistic expectation of response as well as a disclosure of the cost and risk associated with the different types of stem cell therapy available.

Two different stem cell therapies have been utilized in the presenter's practice (adipose derived mesenchymal stem cells, Vet-Stem; and bone marrow derived stem cells, Advanced Regenerative Therapies). Anecdotally, both therapies seem to offer some benefit to some of the individuals, but the reduced morbidity and surgical complications with bone marrow derived cells, in addition to the lower cost and apparent increased effectiveness has led to more patients receiving this type of stem cell therapy. 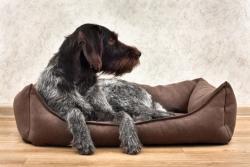