Which insulin should I use? (Proceedings)

Insulin has become increasingly important in the treatment of dogs and cats with diabetes mellitus. Almost all dogs are classified with insulin-dependent or type 1 diabetes mellitus. Although up to 60% of cats are non insulin-dependent or type 2 diabetics at the time of diagnosis, early intervention with exogenous insulin is an important component to achieving remission and preserving the function of insulin-secreting beta cells. For this reason almost all of our diabetic dogs and cats will be treated with insulin so it is important to understand which insulin preparations are available and their utility in our canine and feline patients.

Insulin was first discovered in 1921. The original preparations were bovine and porcine pancreatic extracts. These formulations were short-acting, relatively dilute and impure. As a result, frequent administration and large volumes of insulin were required. Due to impurities, local reactions were common. Because beef and pork insulin differ from human insulin by 3 and 1 amino acids, respectively, many people developed insulin antibodies which resulted in variable and poor responses to these insulins in some diabetic people. Over time more concentrated beef and pork insulins were produced and purity improved. In the 1930's – 1950's it was discovered that the addition of protamine and zinc would cause crystallization of insulin and slow absorption. In the 1980's recombinant DNA technology led to the development of human recombinant insulin. The production of human recombinant insulin led to a dramatic decrease in the use of animal-origin insulin in man. In the 1990's insulin analogues were developed to better mimic the basal-bolus insulin requirements of man as well as to improve consistency. The premise is that a more constant (basal) amount of insulin is produced by the pancreas as a result of glucose produced by the liver. This basal production of insulin occurs in the fasted state. There is also a larger, more rapid increase (bolus) in insulin production after meals as a result of post-prandial hyperglycemia.

Human recombinant regular insulin was the traditional 'bolus' insulin used separately or in mixed preparations with an intermediate acting insulin. Monomers are the active form and required for absorption into the bloodstream and insulin receptor binding. When given intravenously regular insulin rapidly dissociates to monomers so there is a more rapid onset and shorter duration. When given subcutaneously, dissociation to dimers and monomers is required prior to absorption into the bloodstream. Using regular insulin subcutaneously, peak insulin levels occur at 60 minutes with a duration of up to 6 hours.

Because of the pharmacokinetics of subcutaneously administered human recombinant regular insulin in man, it requires administration 30 to 45 minutes prior to eating. This was inconvenient so ultra short-acting analogues were developed that could be administered 15 minutes before or after eating. Insulin analogues manipulate the amino acids sequences to alter absorption and dissociation. The ultra-short analogues achieved a more rapid onset, higher peaks and shorter duration. Insulin lispro (Humalog® - Eli Lilly & Co.) was created by switching proline-lysine to lysine-proline at the 28th and 29th positions on the beta chain of the insulin molecule. Insulin aspart (Novolog® - Novo Nordisk Laboratories) was created by the substitution of aspartic acid for proline at the 28th position on the beta chain. Glulisine (Apidra® - Sanofi-Aventis) was created by replacing asparagine at the 3rd position of the beta chain with lysine and replacement of lysine at the 29th position of the beta chain with glutamic acid. These substitutions prevent self-aggregation of the insulin molecules that can delay absorption.

In 1946 Krayenbuhl and Rosenberg of Novo-Hagedorn Laboratories, following the work of Scott and Fisher (see PZI below), discovered that the addition of equal amounts of a protein derived from fish sperm, protamine, and regular insulin with a small amount of zinc prolonged the duration of insulin. This led to the development of Neutral Protamine Hagedorn (NPH). Neutral Protamine Hagedorn insulin is also referred to as isophane insulin due to its symmetrical structure and equal composition of regular insulin and protamine. This is the only human recombinant insulin that can be mixed with regular insulin because the regular insulin is not bound by the NPH so there is a short duration of effect derived from the regular and a longer effect from the NPH. Neutral Protamine Hagedorn must be given to cats and dogs twice daily. The peak is often too rapid and duration too short in cats so this insulin is not routinely used in this species. Some dogs can be managed well with NPH and NPH mixes (70/30 = 70% NPH + 30% regular).

In 1952 Hallas-Moller developed lente insulin when they discovered that the addition of zinc and an acetate buffer crystallized insulin and prolonged its duration. Lente insulin is actually 30% of short-acting semilente (not commercially available) and 70% long-acting ultralente (no longer commercially available). Initial preparations were beef/pork products because the pork insulin tends to be amorphous (absorbed more quickly) whereas the beef insulin crystallizes to a greater extent (slows absorption). The greater amount of zinc in lente insulin can lead to micro crystallization of any added regular insulin so there are not mixed preparations available.

A pork lente insulin (Vetsulin®, Caninsulin® - Intervet/Schering Plough) was previously available as a U-40 preparation. Pork insulin is considered ideal for the dog because porcine and canine insulin are identical. Porcine lente has also been used successfully in cats for many years. The previously available FDA approved U.S. equivalent, Vetsulin®, has been removed from the market due to problems with composition and purity. Initially, it was found that Vetsulin® contained varying amounts of crystalline zinc which could cause a delay in onset and prolonged action. Although the insulin was found to be out of specifications established by Schering- Plough and the FDA it did not appear that most diabetic dogs and cats on this insulin were clinically affected. The FDA had allowed Schering Plough to distribute a limited amount of Vetsulin® (in the form of Caninsulin®) under a critical needs program for dogs and cats in which the veterinarian determined there was no other insulin that could be used to manage their diabetes effectively. Unfortunately, due to more recent problems with purity, this program has been discontinued.

In 1936 the work of Hagedorn, Scott and Fisher led to the development of protamine zinc insulin (PZI). Hagedorn discovered that the addition of various proteins, including protamine, could prolong insulin activity. Scott and Fisher also added the zinc and PZI was born. Eli Lilly & Co. manufactured PZI until 1991 at which time this insulin was unavailable commercially in the U.S. for several years. Commercial production resumed of a beef/pork formulation through IDEXX (PZI VET®) until 2008. There is still a limited supply of PZI VET® available through distributors but now a human recombinant PZI (Prozinc®) is available through Boehringer Ingelheim that has been shown to be effective in cats. Previous PZI formulations were primarily beef so there were concerns that dogs would develop antibodies against the beef component thus it was not recommended in dogs. The use of human recombinant PZI in dogs has not been extensively studied but this insulin may prove effective in this species. Despite being referred to as a long acting insulin, the majority of cats can not be regulated on once daily dosing. This is also a U-40 insulin.

More recently, long acting insulin analogues have been developed to more closely mimic the basal insulin secretion in man. Historically, the human recombinant intermediate and long-acting insulins (NPH, lente, ultralente) had to be given to people twice daily, showed patient-to-patient, interpatient, and site variability in effect. For this reason the ultra long-acting analogues, such as glargine (Lantus® - Aventis Pharmaceuticals) and detemir (Levemir® - Novo Nordisk), were developed utilizing recombinant DNA technology.

Insulin glargine was created by substituting a glycine amino acid for an asparagine at the 21st position of the alpha chain in the insulin molecule. Two arginines were also added to the beta chain. This results in an insoluble insulin molecule at a neutral pH. It is solubilized at an acidic pH and, once administered into the neutral subcutis, becomes insoluble to slow absorption. Glargine is relatively peakless, exhibits little patient-to-patient variability and can be given once daily in man. Because it is formulated in an acidic pH it can not be diluted or mixed without altering its pharmacokinetics. Glargine has become increasingly popular in cats with diabetes due to increased rates of diabetic remission (when accompanied by dietary modification) compared to lente and PZI insulin in newly diagnosed diabetic cats. Glargine has a longer duration than lente or PZI in cats and can be used once daily. Although many cats can be controlled with once daily administration, twice daily administration is believed by some to provide superior glycemic control and improve remission rates, particularly in newly diagnosed diabetic cats. The initial dose recommendations in cats are 0.5 U/kg BID if glucose is >/= 360 mg/dL and 0.25 U/kg if glucose is < 360 mg/dL. Because hypoglycemia is fairly common when instituting therapy, glucose curves (pre insulin then every 4 hours) can be performed for the first 72 hours when instituting therapy. Dogs have shown a less predictable response to glargine than cats so it is not as commonly used as a first choice insulin in this species. The recommended dose in dogs is 0.25 U/kg twice daily. Glargine can be stored in the refrigerator for 6 months. Interestingly, a recent study has looked at the administration of intermittent intramuscular glargine with concurrent subcutaneous glargine insulin in cats with diabetic ketoacidosis and showed that it was effective in treating their disease.

Insulin detemir is another long acting analogue created by the addition of a fatty acid moiety to position 29 of the beta chain of the insulin molecule. In addition to slower absorption from subcutaneous tissues, the fatty acid binds albumin in circulation leaving less free insulin to bind to insulin receptors. There is limited experience with this analogue in dogs and cats. A study in a small number of poorly regulated and newly diagnosed diabetic dogs demonstrated improved glycemic control in all dogs with 46% of dogs well regulated. While no dose has been established for detemir in dogs and cats, it is recommended to start cats and dogs on 0.1 to 0.2 U/kg twice daily. In a cat study of long term use, the final dose was roughly 30% of the glargine dose from a previous study. 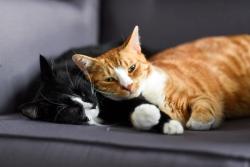