Five years ago Dr. Neil Shaw and his 14 associates worked from a 1,500-square-foot facility. They had so little exam space they were forced to consult with clients over a picnic table or across the seat of a client&apos;s car. Dr. Shaw knew he needed more room, so he built an 11,575-square-foot facility to house 75 staff members in 1999-a facility that won a 2000 Merit Award from Veterinary Economics.

By Portia A. Stewart, Managing Editor

Five years ago Dr. Neil Shaw and his 14 associates worked from a 1,500-square-foot facility. They had so little exam space they were forced to consult with clients over a picnic table or across the seat of a client's car. Dr. Shaw knew he needed more room, so he built an 11,575-square-foot facility to house 75 staff members in 1999-a facility that won a 2000 Merit Award from Veterinary Economics.

So where is Dr. Shaw now? Still growing! Three years later, he has already added a 6,000-square-foot addition that includes an avian ward, a small meeting room, more space for oncology, an ophthalmology surgical suite, a CT scan, and more office space for doctors. His staff of 14 associates has more than doubled to 29 full-time associates and two part-time associates, and his support staff has grown to more than 80.

What's the reason for this incredible growth? "First, there was a need for specialty services in the area," says Dr. Shaw. "Second, we developed strong relationships with referring veterinarians. One hundred percent of our clients are referrals."

Dr. Shaw's only regret: "I wish I'd built a bigger facility initially."

In 1997 Dr. Fling had to make a choice: increase her 2,500-square-foot commercial space to at least 7,500 square feet in her strip-mall location or build her own facility. Ironically, building her own place was cheaper. So she jumped in with both feet and won a Merit Award in the 2000 Veterinary Economics Hospital Design Competition.

One of East Lake Veterinary Hospital's most striking features is a 2,500-square-foot rooftop deck, which Dr. Fling uses for puppy training and entertaining. "We've used the rooftop area for several events, including an open house and a wine-tasting fundraiser for abandoned pets," says Dr. Fling. "Using the roof is a nice way to get some extra space."

The hospital's new location also meant growth: "During our first year in the new building our gross revenue went up close to 40 percent," Dr. Fling says. "It's been good to build equity by owning instead of renting my facility. Despite problems with the economy, local real estate has held its value and continues to appreciate."

"I can't believe my hospital is 11 years old," says Dr. Goldman. "Happily, most of the materials we used are still holding up well."

Dr. Goldman says he and his associates and staff members comfortably fill his 5,310-square-foot practice and still have some elbow room, but the building is close to reaching capacity. "We'll probably outgrow our space in another eight years, but we have 3,000 square feet of undeveloped space for future expansion," he says.

Millhopper Veterinary Medical Center is Dr. Goldman's third facility, and he says he's never felt that his buildings were liabilities. "Each time I developed a business plan to see what was realistic," he says. "Any time you sign for a loan, you're a little concerned, but I never thought I'd fail." And he hasn't. After building in 1992, the hospital experienced a period of high growth, for which Dr. Goldman credits his hospital's prominent location, and client numbers still continue to grow. For example, in one year Dr. Goldman gained 686 new clients and lost about 150 clients, equaling an increase of about 536 new clients.

"I never believed in the theory that if you build it, they will come," he says. "But I did believe that moving from a strip location to a freestanding building with good exposure would help my practice grow."

Dr. Bradford says he chose the right time to build, and he chose the right floor plan to offer the best work flow and maximize the practice's efficiency. "I knew a new hospital would be a financial burden, but the new facility offered us a much-needed chance to grow. When growth levels off, it's a sign your business is about to decline. Our new facility offered us new challenges, and we made the move at a time when our revenue and need balanced well."

But even if you choose the best time to build, Dr. Bradford says you still need to prepare for financial challenges. "A new hospital is a lot like a new home," he says. "If you see an empty counter, you want to fill it. You want more equipment, and if you move from two exam rooms to four, you need more jars, more thermometers, more alcohol holders-the list goes on and on."

Despite the expense, Dr. Bradford says the hospital was well worth the money and the effort. "Our new building prepared us for future growth," says Dr. Bradford. "If you build a versatile facility, it allows you to change with the times and keep current."

When we caught up with Dr. Cashwell, she was facing a broken radiograph machine, a floor that had been recently jackhammered to fix a broken pipe, and a dying hard drive. But these repairs haven't got her down. She says she still believes building her own facility was the best choice, because it gives her the space to offer the best medical care and more services.

What's new at Companion Animal Hospital? In 1994, Dr. Cashwell's practice was surrounded by woods, and staff members watched the deer at the back of the property each morning. Today, Companion Animal Hospital is surrounded by a Super Wal-Mart, a bank, and fast-food restaurants. "It's a major intersection now," says Dr. Cashwell. "I would have never been able to afford the land here if the area had already been developed."

Back in 1994, Dr. Cashwell was also considering computerizing her practice. Today her staff members use four workstations for invoicing and marketing. "We're not completely paperless, but the computers mean we miss fewer charges," she says.

Dr. Cashwell's next goal is to replace the flooring she had to rip out because of the floor leak. She takes these repairs in stride because she says the benefits of owning a hospital outweigh the challenges. "Our functional and attractive facility allows us to offer a higher level of client and patient care, and my staff members and I enjoy practice more," she says.

About seven years ago, Dr. Geasling's accountant told him not to build. "The economy in Western New York has suffered in the last several years," says Dr. Geasling. "My accountant told me my area wouldn't support a new building. He advised me to sell my practice and build somewhere else. I ignored his advice, built my practice, and it's worked out well."

Dr. Geasling's hospital was the 1998 Veterinary Economics Hospital of the Year. And since 1998, his practice has continued to grow. He has finished the 5,800 square feet of undeveloped space on the second floor of his hospital, increasing his usable space from 8,170 to 13,100 square feet.

In this new space, he's added a large conference room for continuing education and puppy classes, a staff lounge and lunchroom, and a separate doctors' office for Dr. Geasling and his partner. Moving the staff lunchroom upstairs freed up the eighth exam room, which doubled as an exam room and a staff lounge.

As his practice expanded, Dr. Geasling's staff did, too. Sheridan Animal Hospital has seven full-time doctors and one part-time doctor-up from five in 1998-and 28 support staff members-up from 18 in 1998.

Dr. Geasling admits he went into the building process with an ace in his pocket: his brother-in-law, Wayne Usiak, AIA, an award-winning architect based in Albuquerque, N.M. "He knew my financial situation and he didn't overdesign or overbuild," Dr. Geasling says. 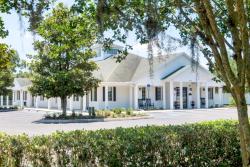 Terravet and the future of veterinary real estate ownership 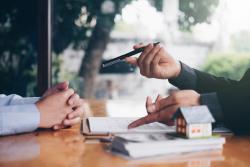