Inflammatory bowel disease (IBD) is a common cause of chronic gastrointestinal signs in cats. The exact pathogenesis is thought to be multifactorial.

Inflammatory bowel disease (IBD) is a common cause of chronic gastrointestinal signs in cats.  The exact pathogenesis is thought to be multifactorial.  A mechanism central to the development of the disease appears to be loss of immune tolerance to normal luminal or mucosal antigens (dietary, bacterial, or self) which leads to a recruitment of inflammatory cells to the intestinal walls.  Damage to the intestines results from the injurious effects of the inflammatory cells and their cytokines, with the end result being tissue destruction and increased intestinal permeability.  Additionally, a recent study demonstrated a correlation between the number of bacteria adherent to intestinal mucus and the extent of mucosal structural abnormalities and clinical signs in feline IBD patients.  The goals of therapy are therefore to reduce antigenic stimulation and to modulate the local gut immune response.

Intestinal inflammation can result from a large variety of gastrointestinal and metabolic diseases and it is the clinician's duty to rule these out before arriving at a diagnosis of idiopathic IBD.  Guidelines set forth by the WSAVA's GI standardization group have defined criteria for diagnosis of IBD as: 1) gastrointestinal signs > 3 weeks in duration, 2) incomplete response to dietary trials and anthelmintics, 3) histologic lesion of mucosal inflammation on biopsy, 4) clinical response to immunomodulatory therapy.

IBD has historically been classified based on the area of the GI tract involved and the type of inflammatory cell infiltrate present.  Lymphoplasmacytic enteritis is the most common form of IBD.

Cats of any age and breed may be affected, though many affected cats are middle aged or older.

Chronic intermittent gastrointestinal signs of vomiting and/or diarrhea are the most common manifestations of IBD.  Weight loss and depressed appetite may be reported.  Physical examination may be normal or reveal thickened intestinal loops and thin body condition.  Abdominal pain may be noted if pancreatitis is also present.

Abdominal radiographs are often of minimal value in the workup of these patients, unless acute severe exacerbation of vomiting warrants the need to rule out other concurrent conditions (e.g., obstructive intestinal foreign body, etc.).  On abdominal ultrasonography, intestines may appear normal or diffusely thickened.  The area of intestine or wall layer that is affected helps the clinician determine the most appropriate method for obtaining a biopsy (endoscopy vs. surgery).  Localized asymmetrical thickening of the GI wall, or loss of normal wall layering (in diffusely thickened intestines) is more suggestive of a neoplastic process.

Intestinal biopsy is required to confirm the diagnosis in patients who have failed dietary trials and conservative management (e.g., anthelmintic treatment, metronidazole).  Appropriate histologic interpretation relies in large part on good quality biopsies.  Endoscopic biopsies have the advantage of being less invasive and easy to obtain and can be a valuable diagnostic tool in establishing a diagnosis of IBD in many affected patients.  However, evaluation of the GI tract is limited to the stomach and duodenum and evaluation of superficial mucosal surfaces.  In some cases surgical biopsies are necessary.

Lymphoma can be patchy in distribution and inflammatory cell infiltrates may be seen proximal and distal to involved regions, which can further confuse diagnosis.  Endoscopic biopsies can often be small and fragmented.  There is also poor agreement among pathologist with respect to classifying the degree of inflammation or presence of small cell lymphoma.  Making the distinction between severe IBD and lymphoma can sometimes be especially problematic.

Distribution of inflammatory (IBD) or neoplastic (Lymphoma) infiltrates may variably affect different regions of the GI tract.  At surgery, biopsies from all regions should therefore be obtained and should include stomach, duodenum, jejunum (2-3), and ileum.  It is usually preferred to obtain colonic biopsies via colonoscopy, unless the deeper wall layers are affected, which can only be sampled surgically.

The presence of inflammation does not on its own support a diagnosis of IBD.  Other known causes of intestinal inflammation should ideally be excluded before intestinal biopsies are pursued.

Subnormal concentrations of cobalamin are a common finding in cats with gastrointestinal disease, with a reported incidence ranging from 16.5 to 61%.  Normal absorption of cobalamin occurs in the ileum.  Cobalamin must be bound to pancreatic intrinsic factor in order to be absorbed.  Distal or diffuse small intestinal diseases can lead to reduced absorption of cobalamin-intrinsic factor complexes and will result in Vitamin B12 deficiency.  Cobalamin deficiency can lead to clinical signs of lethargy, anorexia, and weight loss and may further exacerbate the clinical picture.

Treatment goals are to reduce antigenic stimulation and to modulate the mucosal immune response.  Treatment is tailored to the severity of disease in the individual cat.  Severely affected patients may need concurrent intravenous fluid and electrolyte support for initial stabilization.  Less affected cats may respond to diet manipulation with or without the addition of metronidazole and/or probiotics.  More severe signs may require corticosteroids to achieve control.

Dietary therapy needs to be tailored to the individual cat and the client must be informed that several diets may need to be tried in succession if an initial response is not seen.  Serum IgE screens cannot be used to predict response to various diets.  After obtaining a thorough diet history, a single novel protein source diet or hydrolyzed diet (if the diet history cannot be established) should be selected.  Use of highly digestible diets reduces antigen load and thereby limits intestinal inflammation.

Corticosteroids reduce intestinal inflammation.  Prednisolone is preferred over prednisone in cats, at a starting dose of 2-4 mg/kg q24h. If a response is seen, the dose is very slowly reduced to the lowest dose that will still control clinical signs.  Budesonide (0.5-0.75 mg/cat q24h) is a locally acting steroid that may limit some of the systemic effects of corticosteroids.  Systemic absorption has been documented in dogs, and may therefore also be possible in cats.  Injectable long-acting corticosteroids do not allow for titration of dose and therefore heighten the risk of side effects.  They should be avoided unless the clients absolutely cannot medicate their pet.  Diabetes Mellitus can develop in some cats during chronic corticosteroid treatment.  Clients should monitor for signs, and urine tests strips (e.g., GlucotestTM,  Purina) can be placed in the litter box periodically to look for glucosuria.

Metronidazole (10-15 mg/kg q12) has anaerobic and antiprotozoal spectrum and may also modulate the local intestinal immune response.  It has been suggested that intraepithelial anaerobic bacteria (e.g., Clostridium) may be involved in stimulating an inappropriate immune response in feline IBD patients.  By reducing these bacterial numbers, metronidazole could theoretically reduce their effect on the host immune response.

Chlorambucil is a well-tolerated cytotoxic agent in cats and can be dosed at 2-6 mg/m2 PO q24 h until remission, and is then tapered.  Patients should be monitored for GI side effects and myelosuppression.

Cyclosporine is an immunosuppressant that inhibits T cell function by interfering with IL-2 production by T lymphocytes.  It may be useful in cats with refractory IBD at a dose of 5 mg/kg q12-24h, however, controlled studies evaluating its effectiveness in this patient population are needed.

For patients with cobalamin deficiency, cobalamin can be administered at 250 ug/cat SC q7d for 6 weeks, then every other week for 6 weeks, followed by one more dose after 4 weeks.  Levels (4 weeks after the last dose) should be rechecked to guide necessity of long-term supplementation.  Response to treatment of IBD may be suboptimal if cobalamin deficiency is not corrected.

Probiotics are viable non-pathogenic bacteria or yeast that, when given orally, are resistant to gastric degradation.  They exert a positive influence by modulating gut flora, inhibiting colonization by pathogenic bacteria, and by inhibiting translocation of bacteria across the gut wall.  A number of studies in dogs and cats using specific organisms have demonstrated reduced fecal clostridial counts and/or reduction of diarrhea.  A reduction in these luminal bacterial could have theoretical benefit in the management of IBD patients.  However, the effect of probiotics is strain and dose dependent.

Omega-3 polyunsaturated fatty acid supplementation has shown improvement in maintenance of remission in human patients with Crohn's disease and their use has been proposed as an adjunctive therapy in feline IBD patients.  Benefits are thought to be derived from decreased production of pro-inflammatory leukotriene (e.g., LTB4) as well as reduction in cytokine-induced intestinal permeability defects.  Benefits in feline IBD remain unproven.  Unpleasant taste and development of diarrhea can be a problem.

Prognosis for control of signs is good to guarded.  Control of signs is possible in most cats, however, periods of exacerbation are possible.  Some patients remain refractory to treatment.  Treatment failures can result from lack of owner compliance with treatment recommendations, presence of a concurrent disease, or an incorrect diagnosis.  Common concurrent conditions include cobalamin deficiency, occult parasitism, pancreatitis, cholanghiohepatitis, and hyperthyroidism.

Commonly reported signs are weight loss (83%), vomiting (73%), anorexia (66%), and diarrhea (58%) and can mimic those in IBD patients.  Low cobalamin concentrations are common (78%) and levels should be measured in all patients with suspected or confirmed IBD or lymphoma.  In one study of 41 cats with lymphocytic lymphoma, the gastrointestinal tract was the only involved organ in 68% of cats. In other cats, lymphoma was also detected in abdominal lymph nodes or the liver. In 2 cats the liver was the sole organ involved.

Cats generally respond well to combination treatment with prednisolone (1-2 mg/kg PO q24h) and chlorambucil (2 mg PO every other day).  Treatment with this combination results in a long duration of remission in cats with small cell GI lymphoma.  Chlorambucil is usually well tolerated but development of GI signs or myelosuppression may necessitate reduction in medication frequency or discontinuation.  CBC/Platelet counts should be regularly monitored to screen for myelosuppression.  The overall clinical response rate is high (96%) as is the reported median survival time (704 days).  However, a partial response may result in a shorter remission rate.

Hedin C, Whelan K, Lindsay JO.  Evidence for the use of probiotics and prebiotics in inflammatory bowel disease: a review of clinical trials.  Proc Nutr Soc 2007; 66:307-15. 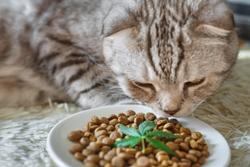 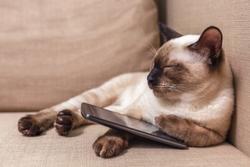 This week on dvm360: 3 ways to combat burnout, plus more veterinary news