Intensive milk or milk replacer programs, also known as accelerated growth programs, enhanced growth programs, or perhaps most properly biologically appropriate feeding programs have had a great influence on bottle calf nutrition programs on U.S. dairies in the past 10 years.

Whole milk is approximately 25-27% and 30% fat and if a 100# calf were allowed to consume enough to take in approximately 2 pounds of dry milk solids per day (2+ gallons of milk/day), and the environmental temperature was 65°F, the 2001 NRC model would predict calf would gain 1.73#/day. Traditional milk replacers consist of only 20% protein and 20% fat and were historically fed at the rate of 1# of powder per day. Using the exact same conditions as previously described, the NRC model would predict a possible growth rate of only 0.39#/day. While there is some variation many "intensive" milk replacers are 28% protein and 15-20% fat, if a 28:20 milk replacer was fed at a commonly recommended rate (for the first week of life) of 1.8# of powder in 2 separate feedings of 2.5 quarts each, the NRC model would predict a growth rate of 1.61#/day. Increase the amount of powder to 2.6# pounds of powder fed in two separate feedings of 3.5 quarts each, as is commonly recommended from week 2 of life until the week before weaning, and the NRC predicts a possible growth rate of 2.59#/day. From this example it is easy to see why we have come to accept low daily gain rates in our dairy calves, while much higher genetic potential growth rates were just waiting for us to discover them. The use of intensive milk replacer or milk programs has allowed us to reach these genetic potentials for growth. This modeling exercise becomes even more impressive when the ambient temperature is dropped to 20°F in the NRC model. The growth rates become 1.96#, 0.86#, 1.43#, and weight loss for 2.6# of 28:20 milk replacer, 1.8# of 28:20 milk replacer, 2.0# of whole milk, and 1# of 20:20 milk replacer, respectively. Obviously, the advantage of intensive programs becomes even more pronounced during the cold times that many of us in northern climates experience. While one could try to overcome the disadvantage of a 20:20 milk replacer in cold weather by feeding more of it but it quickly becomes obvious that the energy and protein intakes are not matched correctly and nutritional imbalances occur. Whole milk and intensive milk replacer are more correctly balanced for matching protein and energy allowable growth. The models would tend to make a strong case for the use of intensive programs just based on average daily gain and potentially cost per pound of gain. Incredibly, there are additional benefits of intensive programs that make the argument for their consideration even stronger.

So what are these additional benefits? These benefits include the following:

• The higher level of protein in intensive milk replacers combined with a fat% that is lower than whole milk supports lean tissue growth resulting in calves with more structure and less fat. The lower fat level is used to encourage some starter consumption and avoid depressing intake.

• Improved energy and protein balance in the calves provides greater levels of nutrition to support the demands of the immune system when challenged by infectious agents. Additionally, the immune system components may respond better.

• By achieving higher growth rates when calves are younger it is possible for heifers to reach puberty earlier and therefore be bred earlier. Earlier breeding can translate in a younger age at first calving and potentially more productive life.

• Several studies have demonstrated a possible increase in first lactation performance of 1,000# pounds or more (Davis Rincker, et al, 2011, Drackley, et al, 2007) While these studies need to be examined closely, they do point to an additional bonus benefit of proper nutrition of the bottle fed calf.

So why wouldn't everybody feed a more intensive program to their bottle calves? I have seen a variety of problems in the field in calves on intensive milk replacer programs. First, producers must come to expect looser manure and "nutritional scours". These calves are healthy but the larger volume of liquid feed consumed produces loose manure that may be interpreted and treated as scours. We need to train our farmers and their employees to expect the different appearance of the manure. Second, these calves need access to clean water at all times. The higher total solids consumed seems drive higher water consumption and the lack of water has led to issues. Third, the milk replacer needs to be measured and mixed consistently. The higher level of solids in the milk replacer produces a greater risk for variation from feeding to feeding. Variation in a calf is not healthy and seems to predispose these calves to gastrointestinal clostridial disease and possible death. For these programs to live up to their potential calf management must be very good.

In summary, intensive milk replacer programs offer great potential to dairy farmers in the form of increased growth rates, improved cost of gain and potential for improved health and productivity when compared to traditional milk replacer programs. They do demand greater attention to detail and solid calf management to be successful, and are therefore not for everybody. This development in calf nutrition demonstrates yet another way that we as veterinarians can provide an additional service to our clients. Consulting with clients on developments in calf nutrition and tracking performance of calves can be a great service to our clients and is a relatively undeveloped area for many veterinarians. 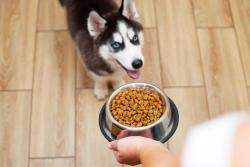