An introduction to the principles of clinical blood gas analysis and interpretation--including two case examples.

Blood gas analysis begins with the collection of the sample. Arterial blood is preferred when assessing respiratory and metabolic status, but venous blood may be useful for the assessment of some metabolic disturbances such as those that occur during severe diarrhea, vomiting, and some toxin exposures. Free-flowing lingual venous blood can sometimes be used to estimate arterial blood gas values in anesthetized animals when arterial blood is unobtainable.1 Common sites for arterial blood collection in dogs and cats include the dorsal pedal artery, femoral artery, or lingual artery. But any large superficial artery may be used.

Sample collection is usually performed with a 1- or 3-ml syringe with a 21-ga or smaller needle. The sample should be collected into a heparinized syringe, which is usually just a syringe that has been filled with heparin and then emptied. This process coats the inside of the syringe barrel and the needle hub. Alternatively, syringes containing powdered heparin specifically designed for arterial blood collection are commercially available. Collect enough blood (about 1 ml) to prevent the heparin from diluting the blood markedly. Expel all visible air from the syringe after sample collection. If the sample will not be analyzed immediately, cap it and place it on ice until it is run.2 However, if accurate partial pressure of oxygen in arterial blood (PaO2) values (< 10 mm Hg change) are important, samples collected into plastic syringes should be run within 10 minutes, even if placed on ice.3,4

Common errors associated with improper sample collection and storage are

2. If the sample is unchilled for a long period, cellular metabolism will continue, the PaO2 will decrease, and the PaCO2 will increase.

3. If the blood is not anticoagulated, the sample will clot in the system and cause an error.

Before a blood gas analysis can be interpreted, the conditions the patient was exposed to need to be considered. The blood gas machine often requires input of the fraction of inspired oxygen (FiO2) and body temperature to calculate alveolar-arterial (A-a) gradients and temperature corrected values, respectively. It is also important to know this information when you interpret the blood gas values clinically.

In this article, I focus on interpreting the PaCO2, PaO2, bicarbonate (HCO3 -), base excess, and alveolar-arterial oxygen difference (AaDO2) values. Normal values for several of these parameters in dogs, cats, and people are given in Table 1.

Additionally, many blood gas analyzers also measure sodium, potassium, and calcium; total plasma protein can be measured with a refractometer or other technique. This additional information allows the calculation of the anion gap or other ionic differences that can provide insight into the metabolic origin of some acid-base disturbances.5,6 These nontraditional approaches to assessing acid-base balance are not routinely used to manage anesthetized patients during surgery, and, thus, they will not be covered here. However, these approaches will be encountered in the context of metabolic acid-base disturbances in critical care and internal medicine cases. A discussion on anion gap and strong ion difference theory is beyond the scope of this article.

Normal PaO2 values will vary with FiO2 and can be calculated by using the alveolar gas equation. However, an estimate can be made quickly by multiplying the inspired oxygen percentage by five. For example, when breathing room air (21% oxygen), a normal PaO2 should be around 100 mm Hg. For a patient receiving 100% oxygen, the PaO2 should be closer to 500 mm Hg. Hypoxemia (low PaO2) becomes a critical concern in most anesthetized animals when it falls below 60 mm Hg because SaO2 and oxygen content fall precipitously below this PaO2 value.7

The bicarbonate (HCO3 -) concentration is calculated from the PaCO2 value by using a mathematical relationship programmed into the analyzer. Some machines report actual and standardized values. Standardized values are corrected to 98.6 F (37 C), a PaCO2 of 40 mm Hg, and normal oxygenation. Bicarbonate is one of the major acid buffering compounds in the body. When bicarbonate is altered, body pH is altered or compensatory mechanisms are activated.

Base excess is the amount of strong acid needed to titrate the pH of 100% oxygenated human blood to 7.4 at 98.6 F (37 C) and at a PaCO2 of 40 mm Hg.8 This parameter is often referred to as a base deficit but is also frequently called the negative base excess. Normal base excess for a person is 0 +/- 2, but base excess in veterinary patients will vary more depending on the species. Base excess is influenced by the total serum protein concentration and will decrease about 2.9 mEq/L for every 1 g/dl increase in total protein concentration. Base excess gives an indication of the metabolic component of acid-base disturbances and is generally unaffected by changes in the PaCO2.

Base excess values can be used to calculate a replacement bicarbonate dose to correct metabolic acidosis. The formula is usually given as

When bicarbonate is given to patients, it is often administered slowly. Only 25% to 33% of the calculated amount is given in any one dose because when acids are neutralized by bicarbonate, carbon dioxide is rapidly produced. This carbon dioxide must be removed (usually by the lungs), or severe hypercapnia and paradoxical cerebral acidosis may result. Anesthetized patients usually have some degree of respiratory depression and are unable to excrete large amounts of carbon dioxide as efficiently as conscious animals are.

The alveolar-arterial oxygen difference (AaDO2 or A-a gradient) is an indication of the difference in oxygen partial pressure between the gas in the alveoli and the blood leaving the left ventricle (assumed to be the same as the blood in the pulmonary capillaries). This difference is most useful to indicate the degree of impairment of oxygen uptake due to factors such as pulmonary disease, atelectasis, or other causes of ventilation-perfusion mismatching during anesthesia. Normal A-a gradients are generally less than 25 mm Hg in room air (FiO2 ~ 0.21) but may increase at higher FiO2 values.

Oxygen is less diffusible than carbon dioxide, so impairments to diffusion will cause the A-a gradient to increase (Table 2). A more common cause of increased AaDO2 during anesthesia is the mixing of nonoxygenated blood with oxygenated blood (e.g. shunting or ventilation-perfusion [V/Q] mismatch). Unoxygenated hemoglobin will mix with oxygenated hemoglobin and steal oxygen away until both are equally saturated. Because of the shape of the oxyhemoglobin dissociation curve, the PaO2 will not directly tell you the magnitude of the arterial-venous mixing. During anesthesia, it is common to have increased V/Q mismatch and A-a gradients, especially in large animals.

Table 2: The Five Causes of Hypoxemia in Anesthetized Patients

Four primary acid-base disturbances are possible: respiratory acidosis with increased carbon dioxide, respiratory alkalosis with decreased carbon dioxide, metabolic acidosis with decreased base excess, and metabolic alkalosis with increased base excess and HCO3 - (Table 3). Compensation may occur to reduce the magnitude of the primary abnormality, but it never results in overcorrection.

Acid-base disturbances are often corrected before or are tolerated during anesthesia. It may be less problematic to correct chronic abnormalities slowly rather than correcting them during a short anesthetic-surgical procedure. Acute respiratory depression or hypoxia is common during anesthesia and is usually corrected rapidly.

Three steps can be used to quickly assess the acid-base status of anesthetized patients.

Acid-base disturbances are not primary diseases but are signs of an underlying condition that should be diagnosed and corrected. For example, treating metabolic acidosis with bicarbonate (or with another alkalinizing agent) without treating the underlying cause will only mask the clinical signs and may not improve patient survival. Likewise, treating respiratory acidosis with an alkalinizing agent is contraindicated. The correct treatment for respiratory acidosis is increasing ventilation. The addition of bicarbonate would only worsen the hypercarbia if the ventilation could not compensate.

Some patients have mixed acid-base disturbances. That is, they have two or more simultaneous respiratory or metabolic conditions associated with the primary disturbance (e.g. simultaneous respiratory acidosis and metabolic acidosis). A mixed acid-base disturbance is particularly common during anesthesia when a patient has preexisting metabolic acidosis. When the patient is anesthetized and respiratory depression occurs, the PaCO2 will increase and any respiratory compensation that had occurred will be replaced by respiratory acidosis. Patients may also have two or more metabolic diseases occurring simultaneously. An example would be diabetic ketoacidosis with a superimposed lactic acidosis. Another possible condition is the presence of two or more disorders that may have opposite effects on the pH (offsetting), resulting in a reduction in the magnitude of the primary disturbance.

The opposite occurs when free water is lost and the extracellular fluid constituents are concentrated. In this instance, sodium is often elevated, producing hypernatremic, or contraction, alkalosis. In patients with severe diarrhea, bicarbonate is lost in excess of chloride, leading to hyperchloremic acidosis. This acidosis may be confounded further by lactic acidosis if tissue perfusion is reduced because of severe volume loss and dehydration. 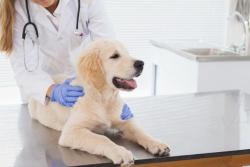 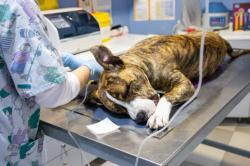 Preventable anesthetic mistakes and how to avoid them
Advertisement