Nephrotic syndrome is an uncommon to rare complication of protein-losing nephropathies. Diagnosis of nephrotic syndrome requires the concurrent presence of proteinuria, hypoalbuminemia, third-space accumulation of fluid, (such as ascites) and hyperlipidemia; when present, this diagnosis is pathognomonic for glomerular disease.

Patients diagnosed with nephrotic syndrome most commonly present for abdominal distention secondary to ascites. However, it is not uncommon for patients who are diagnosed with protein-losing nephropathies in the absence of obvious ascites to have some sub-clinical abdominal fluid accumulation evident upon diagnostic imaging. Patients may also have pitting subcutaneous edema, particularly in the distal extremities and ventral abdomen, thorax, and neck. Fluid is less commonly found in the pleural and pericardial spaces, and dyspnea or tamponade are very rare. Extravasated fluid is usually a pure transudate.

A number of complications are noted more frequently in human patients with nephrotic syndrome as opposed to those with asymptomatic proteinuria, the most common of which is thromboembolism. This increased prevalence may be due to vascular stasis and/or reduced rate of blood flow due to hypovolemia, and reduced activity levels. Limited retrospective studies in dogs with glomerular disease suggest that risk of thromboembolism is not linearly associated with severity of proteinuria, but relationship to nephrotic syndrome in particular has not been examined. Sites of thrombosis in dogs include the splenic, hepatic, intestinal and other mesenteric veins, pulmonary vasculature, and the renal and adrenal artery and vein. Although people with nephrotic syndrome are also at increased risk of coronary artery disease, secondary infections, and acute renal failure, these have not been recognized as occurring more frequently in veterinary patients with nephrotic syndrome versus those with asymptomatic proteinuria.

Nephrotic syndrome may be solely due to massive urinary loss of albumin and other proteins, with third spacing of fluid and hyperlipidemia being consequences of decreased plasma oncotic pressure. Conversely, other evidence in people and animal models suggests that these latter components of nephrotic syndrome may only be partially related to hypoalbuminemia, and instead may result from independent pathologic processes that occur concurrently with glomerular damage:

Proteinuria and hypoalbuminemia: Hypoalbuminemia in patients with nephrotic syndrome is a direct consequence of proteinuria. In people, 'nephrotic range' proteinuria refers to urine protein loss greater than 3 g/24 hr/1.73 m2 in adults, and identifies patients at increased risk for development of nephrotic syndrome. A similar value has not been established in dogs and cats, and clinically, the amount of albumin loss that must be present for third-spacing of fluid to develop in dogs or cats appears to be highly variable. Animals with severe hypoalbuminemia are commonly encountered that have no or minimal ascites, and conversely occasional patients are evaluated with only modest decreases in serum albumin but nevertheless obvious third-spacing of fluids. Serum albumin concentration and urine protein excretion in nephrotic versus non-nephrotic dogs have not been systematically studied in dogs with nephrotic syndrome, but dogs with serum albumin concentrations greater than 1.5 g/dl or urine protein:creatinine ratios less than 10.0 are not consistently reported to have third-spacing of fluid.

Extravascular fluid accumulation: Hypoalbuminemia is necessary for third-spacing of transudate fluid to occur, but the pathogenesis of fluid extravasation is more complex than simply due to a drop in plasma oncotic pressure. Under homeostatic conditions edema is usually prevented by re-uptake of fluid in the distal capillaries and the lymphatics. Hypoalbuminemia results in a decrease in plasma oncotic pressure and thus initially favors greater net outward flow of fluid. However, albumin usually rapidly equilibrates between the vascular and interstitial spaces, and a given reduction in plasma albumin concentration should result in a near-identical decrease in interstitial albumin concentration. Additionally, rodents and dogs with severe, induced hypoalbuminemia fail to develop edema following fluid challenge despite a significant reduction in plasma oncotic pressure.

The 'underfill' hypothesis argues that the initial decrease in plasma oncotic pressure results in up-regulation of the renin-angiotensin-aldosterone system due to the initial increase in fluid extravasation and secondary decrease in circulating blood volume. Increased sodium retention therefore maintains near-normal intravascular hydrostatic pressure which is not matched by an increase in interstitial hydrostatic pressure, and edema forms. Alternatively, the 'overfill' hypothesis proposes a primary nephron defect, independent of the glomerular lesion that results in protein loss, which prevents adequate sodium excretion. Sodium avidity secondarily results in increased intravascular volume, a rise in hydrostatic pressure, and ultimately fluid extravasation. However, hypertension would be expected in these patients, and this indeed occurs in human adults and many veterinary patients with glomerular disease with or without nephrotic syndrome. Finally, a third hypothesis, which is supported in some forms of human glomerular disease, suggests that an unidentified 'permeability factor,' may directly alter vascular and glomerular permeability and be the cause of edema. These theories are of course complicated by the fact that not all nephrotic syndromes in people likely have the same pathogenesis; therefore, veterinarians should be cautious in assuming that nephrotic syndrome in veterinary patients has a similar pathogenesis as in people.

Hyperlipidemia: Although cholesterol is the only lipid routinely measured in most dogs and cats with nephrotic syndrome, human patients and animal models have both quantitative and qualitative abnormalities in total serum lipoprotein profiles. These include an increase in serum total, very low-, low-, and intermediate-density lipoprotein cholesterol, serum triglycerides, and chylomicrons, most of which are proportional to the severity of hypoalbuminemia. A significant correlation between serum cholesterol and albumin has not been found in dogs with glomerular disease, but patients with nephrotic syndrome have not been specifically studied. Increases in cholesterol and triglycerides are due to both up-regulated activity of enzymes in their synthesis pathways as well as reduced catabolism.

Removal of fluid is recommended only when patients are in obvious discomfort or presence of fluid may be life-threatening. Indications for abdominocentesis generally include dyspnea due to impaired inspiration, reduced appetite, or markedly decreased activity levels. A less common indication for removal of ascites in dogs and cats is severe hypertension, which anecdotally may be aggravated by large volumes of ascites. Routine removal of large volumes of fluid should be avoided as this may cause further up-regulation of the renin-angiotensin-aldosterone axis due to hypovolemia following increased extravasation of fluid to replace the removed fluid. Repeated removal of fluid and secondary intravascular underfilling and acidosis also may result in hyponatremia and hyperkalemia (i.e. 'Addisonian' electrolytes).

Diuretic therapy is usually initiated in veterinary patients with nephrotic syndrome and clinical signs severe enough to merit fluid removal. The dose should be adjusted to minimize fluid accumulation until anti-proteinuric or disease-specific therapy minimizes albumin loss; the goal should not be to completely stop fluid extravasation, as the diuretic doses typically required for this outcome lead to hypovolemia and electrolyte abnormalities. Spironolactone, an aldosterone antagonist, may be more effective than loop diuretics (i.e. furosemide) in dogs, and minimizes the likelihood of electrolyte abnormalities. Patients that require chronic diuretic therapy may respond best to spironolactone monotherapy or a sub-maximal dose of furosemide in conjunction with standard dosing of spironolactone.

Intravenous fluid therapy in patients with nephrotic syndrome is occasionally required when hypovolemia is present or acute renal failure is suspected. Low-sodium isotonic crystalloids or synthetic colloids are most appropriate. Hypoalbuminemic patients have metabolic alkalosis, and thus 0.9% or 0.45% sodium chloride is more appropriate than alternative buffered solutions. Although in theory a low sodium fluid should also reduce the likelihood of iatrogenic 'overfill,' patients with nephrotic syndrome are sufficiently sodium avid that decreasing the rate of fluid administration is likely more critical to avoid overhydration and worsening fluid extravasation than the sodium concentration itself.

Anticoagulant therapy in people and veterinary patients with glomerular disease is usually initiated once serum albumin decreases below 2.0-2.5 g/dl. Aspirin is used most commonly in dogs and cats in order to minimize spontaneous platelet aggregation.

Because of the association between hyperlipidemia and coronary artery occlusion by atherosclerotic plaques in people with nephrotic syndrome, treatment with HMG-CoA reductase inhibitors (i.e. 'statins') is oftentimes recommended. Fortunately there are no documented consequences directly attributed to hyperlipidemia in dogs or cats with nephrotic syndrome. As a result, other than non-specific therapy with a commercial renal-formulated diet that includes an appropriately modified polyunsaturated fatty acid ratio, no specific lipid-lowering drugs are recommended.

Finally, nephrotic syndrome in people is commonly treated with immunosuppressive drugs, as the most common underlying diseases (membranous glomerulopathy and minimal change disease) are frequently steroid-responsive. Unfortunately, prednisone or cyclosporine in dogs with glomerular disease in general has only provided evidence of worsened or at best unaltered prognosis.

*These proceedings are excerpted and modified from the chapter 'Nephrotic Syndrome,' in the forthcoming textbook, Nephrology and Urology of Small Animals, eds. J. Bartges and D. Polzin, Wiley-Blackwell, Ames IA. 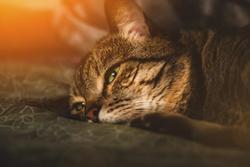 Urolithiasis and the impact of nutritional management

Nutritional management of urolithiasis in dogs and cats