Before you sign that shiny new contract, make sure you understand all of its provisions.

One of the many reasons veterinarians choose to have a lawyer review their employment contracts prior to signing is that these agreements often are chock full of legalese. And while the terminology and provisions in veterinary employment contracts are largely standard, and the practice has no intention of fooling the associate, it can be risky to ignore legal wording you do not understand. I advise veterinarians not to sign any type of contract (employment, partnership, leasehold) that contains hard-to-follow terminology unless they fully understand the provisions.

This is particularly sound advice when it comes to agreements that provide for the assessment of specific consequences for failing to adhere to stated obligations (known as “breach of contract”). These consequences, or “damages,” appear in all sorts of contracts, from employment agreements and mortgages to buy-in offers and clinic sale documents.

Simply stated, damages in contract law are the amount of money the losing party in a contract dispute is obligated to pay if a breach has been committed. When an agreement between 2 parties contains a specific “price to pay” if one of those parties does not follow through on their end of the deal, the law recognizes the potential for unfairness and will proceed on deciding consequences.

Bad things can happen when contracting parties decide their own penalties in the event of a breach. For example, private mortgage lenders have included “instantaneous foreclosure/eviction provisions” in the event of a payment arriving even a minute late.

In veterinary employment contracts, breach consequences commonly appear in 2 places: the “damages clause,” which comes into play when an associate violates a noncompetition or nonsolicitation provision, and the “claw-back of signing bonus” provision, which is triggered when an associate quits earlier than provided for in the contract. These 2 terms are perfect examples of the legal difference between penalties and damages—a distinction courts take very seriously.

Consider a provision in an associate employment contract that provides for a $10,000 signing bonus. The contract specifies that if the associate stays for less than 1 year, the bonus must be repaid to the employer on a pro-rata basis. This doesn’t sound unreasonable, or difficult to calculate. The language looks, smells, and tastes like damages, a fair price to be exacted from the breaching party to compensate the aggrieved side.

Now consider this contractual noncompetition prohibition term: “If, within 2 years of leaving employment, associate provides veterinary services anywhere within 5 miles of employer’s clinic, the associate will pay to employer the sum of $200,000.” Is this a fair provision, a reasonable pecuniary figure? Or is it just a heavy hammer to pound the associate in the event of an alleged breach?

Many courts consider these types of stipulated damages not to be damages at all, but rather a penalty. And the law generally prefers penalties to be inflicted by the government, not by private individuals or companies.

Contract lawyers understand this dichotomy of terminology and often draft contracts with provisions that would normally be considered a penalty but include this additional sentence: “Parties agree that the amount of $200,000 is reasonable and agreed liquidated damages for a violation of this noncompetition term and as such it does not constitute a ‘penalty.’”

Nice try. But plenty of courts ignore that categorization, electing instead to decide for themselves whether a damages term indeed actually amounts to a penalty. Generally, the more unduly onerous the damages, the more likely they are to be deemed not legally enforceable.

As noted earlier, damages are the money the losing party in a contract dispute must pay if a breach has occurred. Like the alleged breach itself, the amount and/or mathematical formula for the calculation of damages typically must be pleaded and proven in court. It’s a question for the judge or jury: “How much, in dollars, did the breach actually hurt the aggrieved side?”

“Liquidated damages” set forth in a contract represent an effort to sidestep the judicial determination of appropriate compensatory damages by setting forth an amount (or a formula for calculating reasonable damages) that both parties agree is fair.

In court, assuming the “price” set for a breach manages to overcome the hurdle of being categorized as a penalty, there is still no guarantee that the specified liquidated damages amount will be accepted by a judge. If the amount set forth as liquidated damages appears unreasonable—even confiscatory—judges often can and do look past the “agreed damages” and make an effort to determine the actual injury to the aggrieved party. Liquidated damages are not popular in American jurisprudence, as they are often seen as an effort to make an end-run around both the typical requirement to prove damages and the option of a court to determine what is fair.

Liquidated damages in employment contracts are not as common as they once were. Both the attorneys who draft employment agreements and employment law litigators know that judges commonly look dubiously at this sort of provision.

Most attorneys who do draft such terms into their employment agreements try to make the liquidated amount as close to fair as possible. They know that straying into ridiculous amounts is an invitation to have the language stricken or “reconfigured” by a court if the agreement is challenged.

Some attorneys (and quite a few individual veterinary practice owners) employ liquidated damages clauses because they tend to instill fear in the associate. Many new hires will sign an employment contract containing a stratospheric liquidated damages term, assuming that they will have no plans to ever challenge it—especially if they see the job as short-term.

Later on, however, when local relationships develop and that veterinarian becomes part of the community, the noncompete may get a closer look. At that point, the duration or distance may finally be recognized as excessive or overly broad.

The associate might be willing to go to court and challenge the noncompete, if the damages determination has to be pleaded and proven by the employer. Even so, if the liquidated damages clause specifies 3 years’ gross salary of the associate as the price for violating the noncompete, that same associate might be scared away from litigating. They could easily become worried that doing so could trigger the huge pecuniary damages set out in the employment contract. 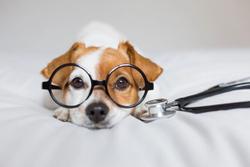