"Tufts Expo might not have been a financial success, but the program was always highly rated," says Dr. Anthony Schwartz, associate dean with Tufts University School of Veterinary Medicine. "We did a lot of thinking and made some necessary changes. We're very excited about this."

The most notable difference between NVC and its predecessor is the change of venue. While Tufts Expo's inaugural success brought in more than 4,000 registrants, its 2001 convention was destined for failure. Attendance dropped roughly 70 percent when the show opened in October in Boston, a month after the Sept. 11 terrorist attacks.

"We really got killed," Schwartz says. "People didn't want to fly, let alone go to Boston. I'm not at liberty to talk about how much was lost there, but it was substantial."

"There were several areas where we could've done better," he says. "We certainly learned a lot."

Tufts leaders set out to overhaul the show. With continuing education as the venture's backbone, they collaborated with surrounding veterinary medical associations and included Rhode Island Veterinary Medical Association (RIVMA) as a co-sponsor.

RIVMA President Dr. Gary Block says affordability is a plus.

"Providence is much cheaper than Boston," Block says. "It's a big cost savings to veterinarians."

NVC's success rides on its transformation. Like Tufts Expo, the convention will offer plenty of continuing education with three days of nine to 12 simultaneous sessions. The difference is they won't be opened to the public, only to veterinarians and staff.

The show also has switched to a nonprofit status with its earnings earmarked for scholarship awards.

"The idea that a private business was running Tufts Expo was not received well by the veterinary public," Schwartz says. "This change will help our students and add to the convention's success." 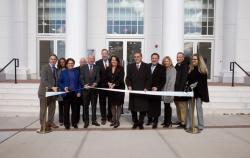