Suspect GI bleeding? What to do when you don't see red

Gastrointestinal bleeding in dogs is not uncommon. Unfortunately, the signs can be subtle. Follow this approach from Dr. Jonathan Lidbury when presented with patients with suspected GI bleeding.

Here's a scenario: A 9-year-old, 25-lb (11.3-kg), fixed, mixed-breed male dog is brought to your clinic because, as the owner says, “Something is off with Marley.” The owner reports that Marley hasn't been eating much and is lethargic.

Is gastrointestinal (GI) bleeding on your differential diagnosis list? According to Jonathan Lidbury, BVMS, MRCVS, PhD, DACVIM, DECVIM, it should be.

At a recent Fetch dvm360 conference, Dr. Lidbury explained that although GI bleeding can be obvious with clear GI signs, this isn't always the case. Sometimes the only noticeable clinical sign is a behavioral change or anorexia. Luckily, Dr. Lidbury outlined a step-by-step approach for diagnosing obscure (cause is identified by using endoscopy) or occult (cause can't be determined by using endoscopy) GI bleeding.

Dr. Lidbury emphasizes checking for petechiae; looking for blood in all orifices (e.g. nose, eyes); performing a rectal examination to check for blood, masses and other foreign bodies; and, finally, palpating the abdomen.

Question owners about access to drugs such as nonsteroidal anti-inflammatory drugs (NSAIDs), glucocorticoids, antithrombotic drugs and heparin and if the pet could've been exposed to coumarin rodenticides. A description of recent bowel movements is also needed.

Results may reveal anemia, hypoproteinemia, an increased blood urea nitrogen (BUN)-creatinine ratio or variable platelet counts. However, Dr. Lidbury says that normal blood results don't automatically rule out GI bleeding. Other lab tests, such as a coagulation test or a fecal direct smear, can be useful for identifying or ruling out potential causes of bleeding.

GI ulceration is difficult to capture with abdominal ultrasonography, but Dr. Lidbury says you may see mucosal thickening, a mass effect, thickening around an ulcer or a crater. Ultrasonography isn't a definitive diagnostic tool, but it can detect abdominal masses and lesions of other organs that may help you rule out GI ulceration, Dr. Lidbury says. Abdominal radiography is not a good way to detect GI ulceration but is useful for identifying foreign bodies, masses or free fluid.

Visualize the GI tract with endoscopy or surgery

If you still suspect GI bleeding but haven't been able to confirm it, endoscopy or exploratory laparotomy is the next step. Dr. Lidbury recommends endoscopy over surgery since it allows you to look for a lesion from the inside rather than looking for it from the outside. However, both methods have pros and cons. For example, endoscopy allows you to biopsy lesions but doesn't allow you to resect them.

Another option is capsule endoscopy, where the dog swallows the capsule (ALICAM-Infiniti Medical.) The capsule travels the entire GI tract, taking 360-degree images along the way. The images are stored in the capsule itself, so once the capsule is recovered, the images are available for download. Dr. Lidbury performs capsule endoscopy in tricky, occult cases. This method may also be helpful in practices that don't have an endoscope. One downside is that you can't get a biopsy, and it should only be performed in patients over 13 lb (6 kg).

Ideally, you treat the underlying cause of the bleeding, Dr. Lidbury says. For example, you would resect a tumor if it's the cause or administer vitamin K if there's vitamin K antagonism. Occasionally, resection of gastroduodenal ulcers is recommended. However, for GI ulceration, medical treatment is standard.

Sucralfate, proton pump inhibitor (PPI [omeprazole, pantoprazole]) or famotidine therapy (although this is less effective than PPIs) is the generally recommended medical treatment. Dr. Lidbury's treatment of choice is usually sucralfate combined with PPI. There does not appear to be an advantage to combining PPIs with famotidine.

What about fecal occult blood tests?

Although it seems like a fecal occult blood test would be an important diagnostic tool in regards to GI bleeding, Dr. Lidbury rarely performs it. He says that it results in a lot of false-positives, most likely because of a patient's diet. Dr. Lidbury does note that there are sensitive and specific tests used in human medicine, and he is hopeful that a similarly effective assay will be developed for veterinary medicine.

(Disclosure: Dr. Lidbury has acted as a paid speaker for and received funding in support of research from Infiniti Medical.)

Performing and calculating a PCV 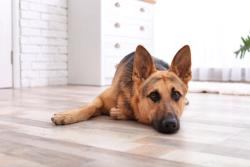