When 1-year-old Stella escaped a burning house, she sustained enough damage to put her in an oxygen-saturated kennel for two weeks, according to a recent news release. She also became the face of a pioneer movement in veterinary medicine by becoming the first animal to get a cod fish skin graft.

“My dad's house caught on fire last Wednesday night while he wasn't home,” Madison Darmer writes on her GoFundMe post regarding Stella's condition. “Both of his dogs were locked in the house. One is at MSU [veterinary] clinic for burns and smoke inhalation, and the other is really shaken up and limping pretty bad.”

According to the release, the use of Kerecis' fish skins for treatment on humans was marked as safe and effective by the FDA in 2013. In that approval letter, the FDA states that it can be used on partial and full-thickness wounds, ulcers, deep cuts, burns, surgical wounds and open sores. There are several variations of the dressing available on their website.

According to Kerecis, fish skins can reduce inflammation, just like fish oils and omega-3 fatty acids. It accelerates wound closure and is eventually converted into living tissue. You can learn more about their products and who they are here.

In the release, Michigan State University (MSU) veterinarian and surgical resident Brea Sandness, DVM, BS, says Stella had second- and third-degree burns covering 10% of her body, with wounds across her head, nose, ears, hind end and sides. Because of her condition and the damage to her lungs, the Rottweiler puppy's veterinary team at MSU's Veterinary Medical Center wanted to avoid using anesthesia to treat her.

Luckily, Dr. Sandness recalled the Camp Fire wildfires in California. There, veterinarians had used tilapia skin to treat bears and pets that had been injured by raging fires. The fish had acted as a biological bandage to cover the wound as it healed-however, the release states, tilapia skins aren't commercially sold in the U.S.

That problem was quickly solved, Dr. Sandness said in the release, when she found the Icelandic company Kerecis and, most importantly, their product Omega3 Wound. She was hooked. To make the find that much better, Omega3 Wound already had research and evidence backing descaled cod skin up, as well as an approval by the FDA.

The catch, of course, was that it had never been used on animals before. According to the release, Dr. Sandness was assured by the fact that there had been minimal complications in humans and decided to go for it.

The package of cod skins was shipped overnight, donated by Kerecis, and the grafting process began immediately. In the release, Dr. Sandness says that the grafts were easy to place on Stella's wounds. Ideally, the cod skins would be absorbed by her body as new tissue grew.

Dr. Sandness says in the release that not only did the cod skins absorb well, but they decreased Stella's pain, acted as anti-inflammatory aids and also worked as an anti-bacterial for several days.

“Stella's case is an inspiration,” Dr. Sandness says in the release, “and her grafts have the potential to be a new and highly-effective treatment tool in the veterinary profession.”

According to Stella's GoFundMe account, she's doing well and is slowly getting back to being a regular, happy puppy.

Everyone who isn't Stella, though, realizes she's no ordinary puppy-she's a fighter and a groundbreaker. “She's a living example that the fire within her burned stronger than the fire that injured her,” Dr. Sandness says in the release. 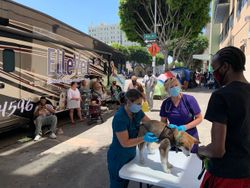 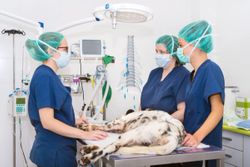 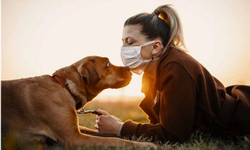 COVID-19 and animals: Then and now