Recognizing and treating shock in cats

Shock in cats is relatively easy to identify, and timely treatment is key to a successful outcome.

A systolic blood pressure of less than 100 mm Hg indicates hypotension, a classic sign of shock in cats. | JJIMAGE/stock.adobe.com

Shock is caused by low oxygen delivery to cells. Dr. Odunayo, a clinical associate professor at the University of Tennessee College of Veterinary Medicine, described three mechanisms of shock:

Hypovolemic shock: Hypovolemia is the most common reason for shock in cats, she said. Potential causes include bleeding from trauma, gastrointestinal bleeding, sodium loss caused by vomiting or diarrhea and plasma loss (e.g. fluid discharge from burns). Cats with common diseases such as pancreatitis or hepatic lipidosis can also develop hypovolemia.

The body compensates for reduced cellular oxygenation by attempting to increase circulating blood volume and oxygen delivery. These compensatory mechanisms are responsible for the clinical signs of shock. Catecholamine release increases sympathetic nervous system activity, causing vasoconstriction, increased heart contractility, sodium and water retention, and (in most species) tachycardia. In cats, these processes do not suppress parasympathetic activity, so cats in shock can have bradycardia.

Physical examination is the most important diagnostic tool for shock, Dr. Odunayo said. The three classic signs of shock in cats are bradycardia, hypotension and hypothermia. Cats in shock may have depressed mentation, weak femoral pulses and cool extremities.

Cats in a veterinary clinic typically have a heart rate of at least 180 beats per minute. “If the heart rate is less than about 160, the cat's in trouble until proven otherwise,” she said. Other disorders (e.g. hyperkalemia and atrioventricular block) can also cause bradycardia, she noted. Some cats in shock have tachycardia.

Poor perfusion typically causes pale mucous membranes. This finding can be mistaken for anemia, she said, adding that evaluating mucous membrane color is not always straightforward even in healthy cats.

A systolic blood pressure of less than 100 mm Hg indicates hypotension. Indirect blood pressure can be measured with the Doppler technique on either the coccygeal or radial artery. Measurements at these two sites may differ, so Dr. Odunayo recommended choosing one site and using it consistently.

Patients in shock can develop lactic acidosis. Blood lactate level may indicate the severity of cellular damage and correlate with prognosis. An elevated blood lactate level (≥2.5 mmol/L) in a hypotensive cat could indicate a higher risk of death, she said.

Dr. Odunayo recommended performing a physical examination, measuring blood pressure, and obtaining blood lactate level (if possible) soon after presentation. Electrocardiography and focused assessment with sonography in trauma (FAST) can sometimes be performed quickly. The patient should be stabilized before undergoing other diagnostic tests, such as complete blood count, blood chemistry analysis, urinalysis, thoracic and abdominal radiographs and ultrasound examinations other than FAST.

The goal of shock treatment is to restore oxygen delivery to tissues as quickly as possible. The sooner oxygen delivery is reestablished, the better the prognosis, Dr. Odunayo said.

All cats with shock, except those with cardiogenic shock, should receive fluid resuscitation. Fluid should be delivered by intravenous or intraosseous catheterization. Subcutaneous and oral routes are not effective for shock treatment, said Dr. Odunayo.

The medial saphenous vein is often easier to access than the cephalic vein, she said. Catheterizing the jugular vein with a peripheral catheter sutured in place is another option. If veins are difficult to access, she recommended considering venous cutdown or intraosseous catheter placement. Neither of these procedures typically requires sedation in cats with shock, she said.

The initial fluid of choice is balanced isotonic crystalloid solution. A cat's total shock dose of fluid is about 60 mL/kg per hour. Cats should receive about one-fourth of this volume (15 mL/kg) over the first 15 minutes and then should be reassessed before receiving more fluid, she said.

Synthetic colloids and hypertonic saline are other options for fluid resuscitation. Dr. Odunayo noted that increased morbidity and mortality have been reported in humans receiving synthetic colloids. Hypertonic saline pulls fluid from the interstitial space into the intravascular space and should be followed by isotonic crystalloid solution to replace interstitial fluid, she said.

“Cats just don't respond as well to fluid therapy when they're cold,” said Dr. Odunayo. She recommended warming cats quickly while delivering the first bolus of fluid therapy. She prefers not to administer additional fluid boluses until the cat's body temperature has reached 98F.

Vasodilation (distributive shock) may require treatment with a vasopressor such as dopamine, norepinephrine, vasopressin or dobutamine. Vasopressors should be administered by constant-rate infusion because of their short half-lives, ideally through a central venous catheter, Dr. Odunayo said. Blood pressure should be monitored in cats receiving vasopressors.

Cats with a history of cardiac disease, signs of respiratory distress or arrhythmias may have cardiogenic shock. These patients should receive oxygen supplementation, diuretics and (if necessary) assisted ventilation, said Dr. Odunayo.

Additional treatments depend on the cause of shock. For example, cats with suspected septic shock should receive antibiotic treatment. Steroids do not appear to change outcomes for patients in shock, she said.

Shock is relatively easy to identify in cats, said Dr. Odunayo. Early treatment is key, and fluid therapy is the mainstay of treatment (except for cardiogenic shock). Cats with hypothermia should be actively rewarmed, and cats whose condition does not respond to fluid resuscitation may need vasopressor treatment.

Dr. Walden received her doctorate in veterinary medicine from North Carolina State University. She is a practicing companion animal veterinarian and a certified editor in the life sciences (ELS). She owns Walden Medical Writing, LLC, and writes and edits materials for health care professionals and the general public. 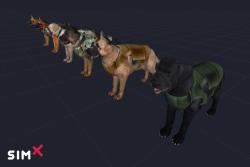 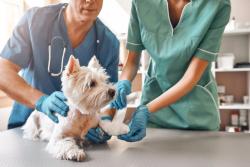