The equine paranasal sinuses (PNS) are an intricate area of the head. There are 6 paired sinuses (frontal, maxillary, dorsal conchal, ventral conchal, middle conchal, and sphenopalatine) and all of these spaces communicate with each other and the nasal passage either directly or indirectly.

The equine paranasal sinuses (PNS) are an intricate area of the head. There are 6 paired sinuses (frontal, maxillary, dorsal conchal, ventral conchal, middle conchal, and sphenopalatine) and all of these spaces communicate with each other and the nasal passage either directly or indirectly. A thorough understanding of the spatial structural relationships will improve one's ability to interpret imaging studies and plan the best approach to the PNS. Trephination of the PNS is a basic procedure that can be readily performed in the field, and familiarity with anatomy is the most important aspect of the procedure. It is imperative to know what, and where, normal is for the PNS, as often the visual field is one of accumulated fluid (e.g. blood, purulent material), and abnormal architecture (e.g. presence of a mass).

The frontal sinus (FS) and dorsal conchal sinus (DCS) freely communicate with each other and as such are referred to as the combined conchofrontal sinus (CFS) or nasofrontal sinus (NFS). The FS extends caudally to a transverse plane through the middle of the zygomatic arch however the caudal surgical limit is at the level of a transverse plane through the zygomatic process of the frontal bone (or a perpendicular line from the dorsal midline to a point midway between the supraorbital foramen and the medial canthus of the eye) (Figure 1). The DCS serves as a rostromedial extension of the FS. The rostral boundary of the DCS, represented by a bony septum, is located about midway between the rostral rim of the orbit and the infraorbital foramen.

The maxillary sinus is partitioned into rostral and caudal regions by a variably located bony septum that extends obliquely mediocaudodorsad from the lateral wall of the maxilla (Figure 1). Commonly, the septum lies about 5 cm caudal to the rostral end of the facial crest and passes over the roots of the 1st and/or 2nd molars (maxillary 09, 10) (see later). The septum blends dorsally with the bulla of the VCS. Anatomically the RMS ends as a small cavity at the level of the rostral end of the facial crest, extending just beyond it in some horses. The CMS extends caudally, ventromedial to the bony orbit, to a vertical plane through the midpoint of the orbit. In addition to the CFS, the CMS has direct communication with the sphenopalatine sinus and the middle conchal sinus. The surgical boundaries of the MS are ventrally, the facial crest, dorsally a line between the medial canthus and the infraorbital foramen, rostrally a line connecting the infraorbital foramen and the rostral end of the facial crest and caudally a tangential line drawn at the rostral rim of the orbit between the ventral and dorsal limits of the MS. The lacrimal canal, which protects the initial part of the nasolacrimal duct (Figure 1), is a bony channel on the internal side of the lacrimal and maxilla bones. The path of the canal and duct is a line from the medial canthus of the eye toward the nasoincisive notch, running slightly dorsal to the infraorbital foramen. This structure is preferably avoided when performing trephination or sinusotomy.

The VCS extends from the level of 111, 211 (i.e. it lies medial to the CMS at its origin) to a perpendicular plane slightly rostral to the midpoint between the medial canthus and the infraorbital canal (i.e. just further rostral then the rostral extent of the DCS). The bulla of the VCS is its cartilaginous caudodorsal extension, and this bulbous, balloon-looking structure can readily be seen via a CFS trephination or a CMS trephination. The middle conchal sinus is also known as the greater ethmoturbinate. It is best seen on nasal endoscopy and is the largest, bulbous structure in the ethmoid turbinates (can be mistaken for an ethmoid hematoma). The middle conchal sinus usually communicates with the caudal maxillary sinus.

Figure 2. Looking down and rostrally into conchofrontal sinus. Dashed oval is outline of frontomaxillary opening. Zip tie is inserted ventral to the floor of the CFS and dorsal to the "roof" of the ventral conchal bulla to indicate pathway leading to nasomaxillary opening (arrows).

Where is the Sphenopalatine Sinus?

The contiguous sphenoid and palatine sinuses lie ventromedial to the ethmoid labyrinth and extend caudally, beneath the cranium. The sinus usually communicates freely with the CMS. The entrance to the sinus is best seen via a maxillary sinusotomy or CMS trephined portal by looking caudomedially and dorsal to the infraorbital canal as it passes through the CMS (Figure 3). The depths of the sphenopalatine sinus are typically beyond the reach of fingers so a sponge forcep or other long handled instrument is useful for extracting masses from that area (e.g. ethmoid hematoma). Access via the conchofrontal sinusotomy or trephined portal is possible. Removing the caudomedial border of the frontomaxillary opening helps to see the entrance to the sinus however there is little room before the extremely vascular ethmoid labyrinth is invaded. Computed tomography is very useful in determining whether the sphenopalatine sinus is involved in a disease process. Radiographic evidence of sphenopalatine pathology is difficult to determine due to superimposition of structures.

Figure 3. Entrance to sphenopalatine sinus as seen via the CMS in a 6 year old horse. A gauze sponge is at the entrance (arrow). IOC â infraorbital canal.

How Does Patient Age and Dentition Affect Paranasal Sinus Anatomy?

The volume of the paranasal sinuses is directly related to the age of the horse, reflecting the expansion of the skull bones as the horse matures, and the development, eruption and migration of the maxillary cheek teeth. In the young horse, 4-6 years of age, the maxillary sinuses are occupied extensively by the reserve crowns of the last four cheek teeth (08 to 11). The roots are contiguous with the vertical plate of bone supporting the infraorbital canal. This makes their individual identification extremely difficult when visualized through a sinusotomy or via sinoscopy and drastically limits any manipulations in the maxillary sinuses. For example, inspissated exudate in the VCS can be removed via a conchofrontal or maxillary sinus approach. For horses less than 5-6 years of age a conchofrontal approach is recommended to allow easier access to the VCS via penetration of the ventral conchal bulla. In older horses a maxillary approach becomes feasible as tooth roots retreat from the sinus and expose the infraorbital plate. At 4-5 years of age the caudal roots of 08 and all of 09 usually enter the RMS and the roots of 10 and 11 lie within the CMS. Gradually there is a rostral progression of the tooth apices in relation to the sinuses as the teeth erupt throughout life. In the horse greater than 5 years old the roots of the 09 in the RMS and the 11 in the CMS become increasingly identifiable and accessible. The caudally-directed apex of the 11 tooth, situated beneath the orbit in the young horse, drifts rostrally to become more vertically oriented in the CMS and rostral to the orbit. The number 10 tooth roots are usually split by the maxillary sinus septum but gradually shift to the RMS side. By 20 years of age the 10 may be found completely in the RMS with the 09. There is variation between anatomical texts and between horses in relation to age-dependent tooth root locations in the maxillary sinuses. In preparation for repelling a cheek tooth via trephination or sinusotomy it is extremely good practice and strongly recommended to use radiography to confirm the correct tooth roots will be struck.

The standard preparation for this standing, minor surgical procedure is appropriate sedation of the horse (usually detomidine and butorphanol), clipping of the hair, surgical preparation of the portal site, and infiltration of 5-6 mls of local anesthetic subcutaneously at the portal site. The size of the portal made will be dependent on the objective of doing the procedure. If only a fluid specimen is being retrieved then a Steinmann pin can be used to make a 3-4 mm opening which will allow passage of a 14 gauge catheter or teat cannula to withdraw fluid (Figure 4). For placement of a lavage catheter (e.g. up to a 20 French Foley catheter) to treat a sinusitis secondary to dental infection, a Michele or Galt trephine up to ~7 mm diameter is appropriate (Figure 4). If sinoscopy, mass biopsying, or dental repulsion is being performed through the opening then a Galt trephine of at least a 1/2 inch diameter is required, and a larger diameter could be used if desired. For all trephinations, the disk of bone cut free is discarded. Care should be taken that the disk of bone is not lost in the sinus cavity although the long term complications from this are likely to be minimal. The skin incision is a U-shaped flap or a cruciate incision centered on the portal site. The skin incision is made firmly to contact bone so periosteum is cut in the same maneuver. The combined flap of skin, subcutaneous tissues and periosteum are elevated to expose the bone surface to allow free rotation of the trephine instrument without binding of surrounding soft tissues. The central guide pin in the Galt trephine is essential to allow a stable start to the bone drilling. When the bone is breached and the underlying mucosa is contacted there will be a noticeable "give" to the instrument and occasionally a horse will react as the non-desensitized sinus mucosa is stimulated. In the case of a preplaced maxillary nerve block, the sinus mucosa should be anesthetized and a reaction from the horse would not be expected.

Trephination of the FS in line with the medial canthi of the eyes and about 5 cm from midline in a 450 kg horse will place the portal directly over the frontomaxillary opening (Figure 5). This portal can be used to gain a direct vertical line onto the apex of tooth 111/211 for repulsion in the middle aged to younger horse. This portal is also very useful to allow sinoscopic exploration of the sinuses and the RMS and VCS can be entered after fenestrating the wall of the ventral conchal bulla.

Figure 5. Trephination sites for the FS, RMS (2 sites) and CMS. 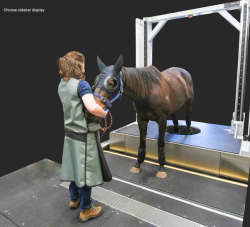