An older study assessed the use of OCD treatment options for ALD in canines. Investigators treated 42 dogs with chronic ALD in 3 double-blind crossover comparisons of clomipramine/desipramine, fluoxetine/fenfluramine, and sertraline/placebo. Following a baseline week, the dogs each had 5 weeks of each treatment course for a total treatment duration of 11 weeks. The investigators titrated each dog’s dose based on tolerability until the maximum dose range was reached. Clomipramine, desipramine, and sertraline were titrated up to 3 mg/kg/day; fluoxetine and fenfluramine were titrated up to 1 mg/kg/day. Dog owners monitored treatment and reported the dog’s licking behavior on a 10-point scale; a score of 10 indicated worst behavior observed and 0 indicated complete absence of excess licking.1

The most efficacious treatments for ALD were medications that specifically acted on serotonin reuptake inhibition, including clomipramine, fluoxetine, and sertraline. Doses, time to therapeutic response, and efficacy of treatment were similar to OCD treatment in humans. Canines in these treatment groups had up to a 50% reduction of ALD symptoms. Those in the fenfluramine and desipramine groups did not show behavioral changes.1 The US Food and Drug Administration has since removed fenfluramine from the market because of cardiac valvular abnormalities.

A more recent review in Veterinary Clinics of North America: Small Animal Practice summarized behavioral therapies for ALD. The most common and studied SSRI treatment for ALD as of 2018 was fluoxetine; however, other antidepressants commonly used in OCD, such as TCAs, showed efficacy in placebo-controlled trials. TCAs act on serotonin and norepinephrine reuptake, suggesting that other neurotransmitters may be involved in ALD. Other options studied included the opioid antagonist naltrexone, and a 63% improvement in lesions was reported. Naltrexone’s exact mechanism of action in ALD treatment is unknown, but investigators suggested a potential interaction with the dopaminergic system may improve OCD-type behaviors.2

Understanding the role of neurotransmitters and behavioral patterns in ALD can assist veterinary professionals in treatment decisions for canines with the disorder. Although data are limited, genetic influences and pharmacotherapeutic responses to OCD treatment in canines with ALD resemble those in humans with OCD.

Sarah Meade is a 2023 PharmD candidate who is studying veterinary pharmacy at the University of Connecticut in Storrs. 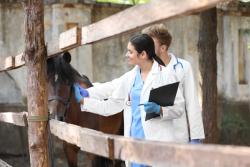 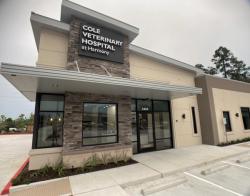