The Australian Veterinary Association (AVA) is warning pet owners to be aware of an uptick in canines suffering from Leptospirosis. The first canine that made the AVA aware of the disease in the Australian Capital Territory (ACT) passed away despite receiving the appropriate treatment.

Leptospirosis is a bacterial disease that affects the kidneys, livers, and occasionally the brain and respiratory system. When warning patients to be on the lookout, the clinical signs of Leptospirosis can be vomiting, lethargy, jaundice, inappetence, change in frequency of urination, diarrhea, and nosebleeds. According to the AVA release, the bacterium that causes the disease is commonly spread through water, vegetation, or soil that has been infected with urination from animals suffering from the disease, most commonly mice and rats.1

“Vaccination, combined with preventing dogs swimming or playing in lakes, ponds, or other sources of stagnant water (which could be contaminated) can help minimize the risk of Leptospirosis infection,” he continued.1

The AVA disclosed within the release that there have been several Leptospirosis cases in the NSW South Coast and Sydney. Within the NSW outbreak, many canines that were infected did not survive. 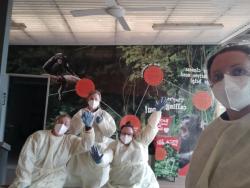