How to avoid medical errors in veterinary practice

Most medical errors in animal and human health boil down to just one thing—communication problems. It turns out that discussing your hospital's medical errors could be the key to preventing them.

By all accounts, it was a pretty average day at the veterinary hospital where Beth Davidow, DVM, DACVECC, was treating patients. Then, a dog suffering from an allergic reaction arrived. There was nothing abnormal about the diagnosis. The veterinarian assigned to the case knew exactly what to do: administer an appropriate dose of diphenhydramine to alleviate the clinical signs. It was all very straightforward until the veterinarian mistakenly grabbed phenylephrine instead of diphenhydramine. Rather than receiving the intended antihistamine, the dog was given a vasoconstrictor and sent home.

This was not a case of negligence or inexperience, Dr. Davidow explains. “This error occurred because we stored the two medications right next to each other on the shelf and the bottles look identical. They are exactly the same size and each contains just 1 ml of a clear liquid.”

Upon realizing the mistake, the veterinarian drove to the client's home when phone calls went unanswered. Thankfully, the patient experienced no adverse effects. But the unfortunate mixup made the hospital realize that something as simple as where medication is placed on a shelf could have catastrophic consequences.

Although this was one of the more dramatic instances Dr. Davidow has observed over the years, it is certainly not an isolated one. No practice is immune to errors. On her website, The Veterinary Idealist, Dr. Davidow recounts other medical errors she has witnessed in her tenure, including patients that received multiple doses of cefazolin when technicians forgot to sign the treatment sheet and a cat that was accidentally sent home with a canine carprofen prescription.1

“We have the potential to make errors every day in every practice, and they can happen in so many different ways,” she says. “I don't think it is because people are careless or inept; it's because we are busy and what we do is super complex.”

Of course, medical errors are not limited to veterinary medicine. The 1999 book To Err Is Human: Building a Safer Health System, edited by three members of the Institute of Medicine's Committee on Quality of Health Care in America, estimated that as many as 98,000 Americans die in hospitals each year as a result of medical errors.

A related 2016 study published in the British Medical Journal highlighted the potentially fatal consequences of errors in human medicine, noting that mistakes are the third leading cause of death in the United States (after heart disease and cancer).3 With statistics like these, the medical profession had no choice but to take pause. In response to these revelations, Medicare and Medicaid revised funding parameters to mandate that health care institutions track medical errors and provide proof that progress is being made.

“That same ‘eureka' moment has not really happened in veterinary medicine because there has been very little research around this subject,” Dr. Davidow explains. And without a third-party system like Medicaid or Medicare in veterinary medicine to provide a strong outside influence, the community has had to police itself in order to improve its systems.

The most common veterinary medical errors

Although research in this area is scarce, it is not completely absent. Having been made aware of the surprising statistics in human medicine, Daniel J. Fletcher, PhD, DVM, DACVECC, an associate professor at Cornell University College of Veterinary Medicine, wondered how veterinary medicine would compare. The root cause of most medical errors in veterinary hospitals, he explains, can be traced back to the same cause as in human hospitals-miscommunication or lack of communication among medical teams. With very little reporting established on the most common types of errors in veterinary medicine, Dr. Fletcher created an incident reporting system that was adopted by Cornell's three veterinary hospitals.

Dr. Fletcher and his coauthors cataloged three years' worth of data, the results of which were published earlier this year in Frontiers in Veterinary Science.4 “The most common types of errors we found in our work-and it is also true in human medicine-were drug errors,” Dr. Fletcher explains. “I can't imagine that anyone who has spent any time in a veterinary practice hasn't seen a drug error of some kind.”

The repeated occurrence of drug errors in veterinary medicine also caught the attention of the FDA's Center for Veterinary Medicine (CVM). In October, the CVM released a report detailing the agency's role in preventing medical errors.5 According to spokesperson Juli Putnam, the most common types of medication errors involve drug prescribing, preparation, dosing and administration, as well as data entry. “These errors have occurred in veterinary clinics and at pharmacies,” she explains.

While the CVM has a voluntary reporting system in place, Putnam says there is generally limited information about veterinary medical errors and that the agency itself is challenged with the limitations of spontaneous reporting. In addition, the CVM does not have the authority to regulate the practice of veterinary medicine. This, coupled with the lack of widespread and detailed reporting, underscores the need for individual practices to take a closer look at internal errors.

Cornell's study, which analyzed 560 incident reports, showed very few instances of sentinel events, defined by U.S. healthcare accrediting organization The Joint Commission as “any unanticipated event in a healthcare setting resulting in death or serious physical or psychological injury to a patient or patients, not related to the natural course of the patient's illness.”

Mistakes don't happen often, Dr. Fletcher notes, but when they do it's good to have a system in place to evaluate and strategize immediately about what you can do to prevent those errors in the future. “We have certainly had that happen in our hospital where we have changed protocols or put extra safeguards in place in response to an error like that,” he says.

One such example included a patient that suffered a magnesium overdose. Immediately afterward, Dr. Fletcher explains, a new multicheck system was established that now requires two people to calculate dosing independently before a drug is administered. It also prompted the university's veterinary teams to consider other drugs that could have similarly confusing dosing and apply the new system to those as well.

Hospitals can also benefit greatly from addressing flaws in their systems and protocols that produce minor medical errors. For an error reporting system to be successful, however, the overarching goal is not to start a witch hunt. Instead, these reports should be used to shine a light on how current processes can be improved to avoid repeat mistakes.

Fixing the problem: Six-step framework for responding to medical errors

Notify the client of the medical error right away.

Investigate what factors led to the incident.

Circle back to the client.

Work to fix systems internally to avoid a recurrence.

Blaming a single person as the cause of the error rarely solves the problem, because when you look closely at most of these situations, anyone else might have made the same mistake in the same circumstance, Dr. Davidow says. Placing blame also reduces the likelihood that individuals will report future incidences. For the unfortunate times when errors do happen, she recommends a six-step guide for learning from those mistakes (see sidebar).

Similarly, Dr. Fletcher says his study has opened up avenues of discussion with other institutions that have implemented incident reporting systems. He sees a lot of potential value for the entire veterinary industry as more open and honest discussions take place. If two large universities or hospitals find similar problems with the same drugs, then making that information more accessible to smaller practices that lack the bandwidth for robust internal reporting systems would allow them to make changes and avoid similar mistakes, he says.

“The only way to reduce medical errors is to talk about them,” he reiterates. 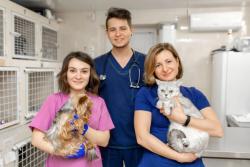