For the first time in almost 30 years, the games leave Europe and come stateside.

National Report — The World Equestrian Games is a monumental event. For many of the riders, the games mark the pinnacle of their sport.

A multicultural event: Equine veterinarians are gearing up to care for horses from all over the globe that will be participating in the 2010 World Equestrian Games, being held for the first time in the United States.

But the 2010 games has taken on an even greater significance. For the first time in the spectacle's nearly 30-year history, the games will leave the comfortable confines of Europe and come stateside, where equestrian sports typically struggle to find a wide audience. In September, Kentucky Horse Park in Lexington, Ky., will play host to what will be the year's largest international sporting event in the United States.

And the inclusion of a new event — Para Dressage — might make this the largest version of the games to date. Although the exact number won't be finalized until summer, about 900 horses from up to 60 different countries could participate, a substantial increase from the 850 competing in 2006.

"Essentially, it's the biggest airlift of horses since World War II," says Kent Allen, DVM, who is coordinating the veterinary activities for the 2010 World Equestrian Games.

Accordingly, the event will receive more oversight by veterinary medicine than has ever been provided at any previous equestrian event. Allen and his team of veterinarians must guarantee that the hundreds of horses remain in good condition from the moment they arrive in the United States to the moment they leave.

Even though international horses will be checked for disease before they even depart for the states, they will have to go through an additional quarantine upon arrival in the United States. Most of the horses will arrive at the Cincinnati airport, where a temporary quarantine facility will be set up. The rest will enter the country at permanent import quarantine centers in New York, Miami and Los Angeles.

Once the horses touch down, doctors will immediately draw blood and send the samples via jet to the National Veterinary Services Laboratory in Ames, Iowa. There, veterinarians will assess the samples for four diseases — dourine, glanders, equine infectious anemia and piroplasmosis.

If the blood comes back clean and horses show no signs of illness during the required minimum 42-hour quarantine, monitoring and observation, they will travel in sealed vans to Kentucky Horse Park. Under normal USDA regulations, horses that test positive for any of the aforementioned diseases could not stay in the country. "Usually, they would not get out of quarantine," explains Madelaine Fletcher, a USDA spokeswoman.

But the size and scope of the World Equestrian Games merited changes in procedure. In fact, to even be considered to host the games, Kentucky organizers had to show the Fédération Equestre Internationale (FEI), which governs equestrian sports worldwide, that it could accommodate piroplasmosis horses during competition.

And, so, after more than a year of discussion and negotiation, the Kentucky Department of Agriculture, the USDA and others agreed on a process that will allow for a temporary importation waiver on horses with piroplasmosis.

Unlike diseases transmitted directly from horse to horse, piroplasmosis spreads from bacteria living on certain ticks. So controlling the tick population is critical in preventing the spread of the disease, Fletcher says. Luckily, it's far from an impossible task.

To start, Mother Nature will give organizers a hand. September and October are not tick season in Kentucky. "The tick population is naturally reduced in the fall," says Dr. Ruth Buck, who deals with equestrian importation issues for USDA. Still, no risks will be taken.

Prevention starts before the games begin. Specialists will conduct tick surveys to assess the size of the tick population. The lawns of Kentucky Horse Park are well-manicured, further reducing the chance of infestation, as ticks prefer tall grass and bushy areas. Furthermore, all of the horses will receive an anthelmintic two to four weeks before arriving in the United States. Thus, all the competing horses should be tick-free when they enter the country.

Once the horses are in the park, officials will check for ticks each time horses leave their stalls and return. As an additional precaution, piroplasmosis-positive horses will wear a halter or other identifier, live in a separate barn and graze in a designated area.

This is not the first time piroplasmosis horses have been allowed in the country. A similar exception was made for the 1984 and 1996 Olympics. However, in those cases, horses could not compete in the endurance competition (a 100-mile race), which exposed them to vegetation (and, potentially, to ticks). But with the added measures in place for the 2010 games, those restrictions have been lifted.

"You can't ever reduce the chances to zero," Allen says, "but it's pretty doggone close to it."

Although the inclusion of piroplasmosis horses is one of the more complicated issues veterinarians will face during the games, it is not their only concern. To ward off worst-case scenarios, professionals will stand by, "waiting for something not to happen," like an invisible safety net, Allen explains. "The ideal at an event like this is that no one knows veterinarians were there."

Team veterinarians accompany horses to competition, though most of their heavy lifting takes place before arrival. Under FEI rules, there's a firm medication policy that ensures horses compete on their own merit and do not receive harmful doses of medication. So while team veterinarians can recommend treatment, they cannot administer drugs to horses.

"If a horse gets a wound, you can use antibiotics and medications that can be used to treat wounds and injuries. It just means there's oversight and strict guidelines so there's no foul play," says Duncan Peters, DVM, head of the Sport Horse Division at Hagyard Equine Medical Institute in Lexington, Ky.

A tragedy similar to the one that led to the deaths of 21 polo horses in Florida last April would be devastating — but nearly impossible under the stringent governing FEI regulations. "The welfare of the horses is always of the utmost importance," adds Amy Walker, spokeswoman for the World Equestrian Games 2010 Foundation. "We understand the responsibility we have."

While events are underway, Peters estimates there will be a minimum of 28 veterinarians on the course, with another six to eight at the finish and an additional eight to 10 in the barn at any given time.

In addition to members attending to horses on specific disciplines, a separate group will conduct drug testing, and Lexington's Rood and Riddle Equine Hospital, the official clinic of the games, will provide additional treatment.

"Once you set the process and procedures and personnel, it's dealing with the crisis du jour, which you can never predict. So you have good people and stay in communication with them," Allen says.

The Massachusetts Society for the Prevention of Cruelty to Animals (MSPCA) will supply equine ambulances staffed with trained personnel who have, in addition to equine medical expertise, discipline-related know-how. "This saves time," says Joe Silva, director of the MSPCA's Nevins Farm and Equine Centre. "Nothing will be introduced that these people haven't seen, for the most part."

"Hopefully, these horses are coming to compete and not coming to the hospital," Allen says. "If something happens, we have a great staff, excellent equipment and all sorts of procedures in place." 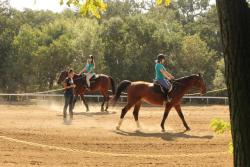