Kids may see it as a fun game, but the Blue Dog software program could help them avoid being bitten

Each year, as many as 4.5 million Americans are bitten by dogs, according to the Centers for Disease Control and Prevention. A University of Alabama-Birmingham (UAB) study might help prevent some of those bites-particularly with children.

UAB psychologists are testing a software program designed to teach children to interact safely with dogs. The Blue Dog software program, created by the Blue Dog Trust in the United Kingdom, contains games that instruct children to avoid behaviors that can trigger bites, like tail or ear pulling and making direct eye contact.

The researchers plan to offer the software to 100 Birmingham-area families with children between the ages of 3 and 6 then test their interaction with live dogs both before and after using the program. Researchers at the University of Guelph in Canada are also conducting the same study.

"If this computer game successfully teaches young children to interact safely with their pet dogs, it could have enormous impact on reducing accidental bites from pet dogs," says UAB psychologist Dr. David Schebel. 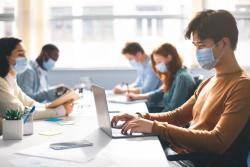