Bad hips and knees: Is it hip dysplasia or a torn cruciate ligament? 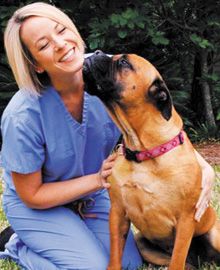 Dr. Jennifer L. Wardlaw, pictured with her bullmastiff Emma Corilata, is a concierge surgeon at Gateway Veterinary Surgery in St. Louis, Missouri.Little known fact: Dr. Wardlaw says she isn't afraid to binge watch cartoons, even when her kids aren't around.

It can be difficult to differentiate between these two orthopedic problems. Luckily, the sit test, among other diagnostic evaluations, can help.

Find out how "Sit. Good dog!" can aid you in your orthopedic evaluations. (GETTY IMAGES)Differentiating between a torn cruciate ligament and hip dysplasia can be tricky, if not frustrating. In one study, 32% of dogs referred to a surgeon for hip dysplasia treatment actually had a torn cranial cruciate ligament.1 Let's review the differences between the two conditions and how simply asking a dog to “sit” offers great clues.

Rupture of the contralateral cruciate ligament occurs in 37% to 48% of dogs within six to 17 months of the initial diagnosis.1 However, ruptures can be bilateral on presentation, giving affected dogs what appears to be a neurologic, crouched walk.

In obvious cases, the keys to diagnosing cranial cruciate rupture are a positive cranial drawer sign and tibial thrust. But what about less obvious cases?

In patients with partial tears, a pain response is elicited when the joint is in full extension. In patients with chronic cases, muscle atrophy is notable, and periarticular fibrosis (medial buttress) is evident on the medial side of the stifle. Medial buttress is almost pathognomonic for a cranial cruciate rupture. The only other condition that may present with a medial buttress is a medial collateral ligament tear, which is usually seen with a deranged stifle, not with simple lameness.

Joint effusion is also a key finding. It can be palpated on the medial and lateral aspects of the patellar tendon.

In patients with a partial tear, the cranial drawer sign may or may not be present. An examination performed while the patient is sedated is needed to confirm the findings. Many patients that do not seem to have a cranial drawer sign while awake have one once they are sedated and relaxed.

Dogs with a torn cruciate ligament sit abnormally. For example, notice how the patient in Figure 1 does not want to flex its right knee. Affected dogs often sit with the affected leg extending out to the side rather than sitting squarely, which they will do even with hip dysplasia. So noting how the dog sits is a critical part of an evaluation.

1. This dog's abnormal sitting position--extending its leg rather than flexing its knee--indicates that it has a cruciate ligament tear, not hip dysplasia.

Radiography is warranted in all suspected cases to document stifle arthritis, confirm pathology in challenging cases of partial tears and rule out other disorders (e.g. tumors). The earliest, most consistent finding is the loss of an infrapatellar fat pad shadow by a soft tissue opacity in the lateral view, which is consistent with effusion. Caudal displacement of the gastrocnemius fascial plane, located caudal to the joint capsule by a soft tissue opacity, is also consistent with synovial distention.

In many cases, you can see the cranial tibial thrust on a radiograph (Figure 2A). Compare this with the position of the second radiograph, which also has effusion but the tibia is not displaced into a cranial position (Figure 2B). Another consistent finding is osteophyte or enthesiophyte formation in the region of femoral trochlear ridges and tibial plateau and at the base and apex of the patella.

2A. Cranial tibial thrust is evident on this radiograph. The knee is subluxated.

2B. Joint effusion is appreciated on this radiograph (loss of visualization of the infrapatellar fat pad shadow and caudal displacement of the gastrocnemius facial plane), but this tibia is positioned normally without subluxation.

Hip dysplasia causes joint inflammation and secondary osteoarthritis, which lead to variable degrees of pain. Clinical signs can vary from slight discomfort to severe acute or chronic pain. Although the disease onset has a linear progression over time, it can be divided into two forms.

The juvenile form typically affects dogs between 5 and 12 months of age. Affected dogs may present with unilateral or bilateral hindlimb lameness or pain on hip extension. Affected dogs may be bunny hopping at presentation, have difficulty rising after rest, exhibit exercise intolerance, or seem reluctant to walk, run, jump or climb stairs. These clinical signs are the result of joint laxity and resultant instability and inflammation.

The chronic form of hip dysplasia has a highly variable onset of clinical signs in middle-aged to senior dogs. Pain is most often related to degenerative joint disease and has a more severe presentation. Clinical signs are similar to the juvenile form. Pain is elicited most notably during hip extension. Patients tend to off load their hip joints by shifting weight forward onto their thoracic limbs. Because of weight shifting over a long period of time, muscle atrophy of the hindlimbs is common. In large dogs, you can often see muscular hypertrophy of the forelimbs as a result of the dogs' chronically hauling themselves up by their forelimbs.

As the disease progresses, crepitus can be palpated with range of motion manipulation. An examination while the patient is sedated, followed by orthogonal radiography will further support the diagnosis of hip dysplasia. While the more chronic cases are much easier to diagnose on radiographs and physical examination (Figures 3A & 3B), younger dogs can often be challenging on radiographs.

3A. Mild hip dysplasia often has incongruence, acetabular sclerosis and a thickened Morgan's line where the joint capsule inserts along the femoral neck.

Since you may not have bony arthritic changes on these films, assessing for laxity in your physical examination and radiographs is vital for young dog diagnosis (Figures 4A & 4B).

4A. This radiograph was scored as OFA Good with mild incongruence and slight acetabular sclerosis in a young dog.

4B. This distracted frog-leg view is of the same dog in Figure 4A but more clearly illustrates the laxity that is present in this patient that was missed with the standard OFA-style radiograph.

Of course, both conditions can be present in a dog at the same time. In the study mentioned above, 32% of dogs referred to a surgeon for hip dysplasia treatment had a torn cranial cruciate ligament.1 Interestingly, 94% of the dogs with a cruciate tear had concurrent radiographic signs of hip dysplasia.1

Thus, I think it is a great practice to radiograph the hips in patients with torn cruciate ligaments as well since it affects the pain and rehabilitation protocols. In my experience, 80% never need hip surgery, but your knee patients won't do as well if you aren't aware you are fighting two battles.

When evaluating an affected dog, it is imperative to do a thorough orthopedic and neurologic examination to accurately localize the clinical signs and provide an appropriate diagnosis and treatment. My best advice: If you examine the patient and still have doubts about the diagnosis, sedate the dog and repeat your entire examination (click here for “7 benefits of sedation”).

The author would like to thank Dr. Phil Zeltzman for his input in this article. 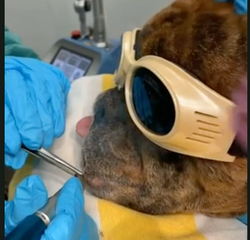 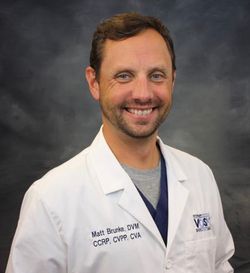 Episode 45: How working at a country practice unlocked one veterinarian's passion for canine rehabilitation