Dr. Phillip Nelson of Western University of Health Sciences is the incoming president, while Dr. Calvin M. Johnson is the new president-elect.

Dr. Nelson earned his DVM from the Tuskegee Institute in 1979 and his PhD in immunology and biotechnology from North Carolina State University in 1993. He earned his bachelor's degree from Jackson State University. Before he became dean at Western University's veterinary school, he served as executive associate dean for the preclinical program. Prior to that Dr. Nelson was the head of the department of small animal medicine and surgery at Tuskegee University's College of Veterinary Medicine, and he also served as associate dean at the Mississippi State University College of Veterinary Medicine for 11 years.

These appointments will be slightly truncated during this transition year as the AAVMC formally moves its annual assembly from the former summer meeting to the annual meeting, which is typically held in early March, the release states. 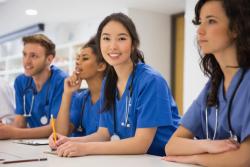