The time I fired my friend

Everyone gets frustrated when their fellow team members are late. This 2016 dvm360/VHMA Practice Manager of the Year contestant initiated a new program to put a stop to tardiness. And then

At the end of last year, I decided to send out an anonymous survey to my entire veterinary practice staff asking for their honest input on how things were going. Among things like benefits and teamwork, some of the questions included:

> Do you feel appreciated by management?

> Do you feel valued?

> How are you handling stress in the work environment?

Despite those macro concepts, the most common theme among the staff was frustration with tardy employees. It seems so simple, yet it was causing the most animosity among the group. The management team shared the results with the staff. We asked the team for their thoughts on how to deal with chronic tardiness.

As a group, we brainstormed and created a protocol based on the teachings from a Fred Pryor seminar. The protocol included ideas on how to take effective, decisive action to deal with problem employees.

Despite that effort, a chronically tardy employee-who happens to be a close work friend of mine-continued to test her boundaries and acquire what we called "occurrences" of tardiness. I followed the protocol we agreed upon-even when I had to send the employee home (with pay) to decide on her future employment.

The very next morning, after her "decision-making day," she walked in late. I had a decision to make. I had never terminated an employee. As she went to her locker to put away her things and go about her day, I receded to my office and shut the door. I needed a quiet place to gather my thoughts and my courage.

She came to my office with an excuse in hand. Before she could go on, I reminded her of the protocol that she had been a part of creating. I asked her to go to her locker and mailbox and remove her belongings. I then walked her out to her car. On the way, we talked.

She understood my decision and actually told me she respected me for "sticking to my guns." As I walked in to the hospital, two employees offered their support. They seemed to understand how difficult the decision was for me. I was also thanked by two more employees for following through with the protocol.

Later on, I gathered the team together and told them what had happened. Although my friend was well-liked, she added a lot of stress to the rest of team, who often had to cover for her late arrivals. It was an emotional day, but it was empowering to have my team (and a protocol) behind me.

Jessie Cox, CVT, is the practice manager of the Animal Hospital of Oshkosh in Oshkosh, Wisconsin.

dvm360, Firstline and Vetted will be publishing personal stories, in-the-trenches advice and bright practice management ideas in the coming months-all from entrants in the dvm360/VHMA Practice Manager of the Year contest. The 10 nominees will be announced at CVC Kansas City in August, and the Practice Manager of the Year will be announced at CVC San Diego in December. 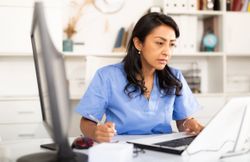 What is your veterinary clinic worth?