Zoetis-manufacturer of Simparica (sarolaner), a chewable flea-tick preventive for dogs, and ProHeart (moxidectin), an injectable canine heartworm preventive-sponsored two recently published veterinary studies examining oral moxidectin for the prevention of canine heartworm disease. One study was designed to determine the optimal oral dose of moxidectin and whether increasing the number of consecutive monthly treatments would improve efficacy against resistant strains of Dirofilaria immitis. A second investigation aimed to evaluate the efficacy and safety of an all-in-one monthly chewable parasiticide that combines moxidectin with sarolaner and pyrantel.

Simparica Trio (sarolaner-moxidectin-pyrantel), a monthly chewable that kills fleas, ticks and intestinal worms and prevents heartworm disease, was recently approved in Europe, according to a release from Zoetis.

What researchers did: Oral moxidectin

To evaluate dosing and frequency, the first study was conducted in three parts. Heartworm-negative dogs were inoculated with D. immitis and randomly allocated to treatment groups. Three macrocyclic-lactone–resistant heartworm strains were used, derived from isolates recently collected from naturally infected dogs from the middle to southeastern United States. All three isolates were validated as infective strains in recipient animals. All dogs were necropsied for adult heartworm recovery four to five months after inoculation.

What researchers did: Triple-protection chewable

The study evaluating combination therapy also consisted of three parts. In the first two parts, heartworm-negative dogs were inoculated with one of two recent, naturally occurring, nonresistant strains of D. immitis. Each strain was validated as infective. The third part was a field trial. All dogs 6 months or older were confirmed negative for heartworm antigen and microfilariae. Dogs could not be included if they had been recently treated with a heartworm preventive and were within the labeled “protective period” for that product.

In part one, groups of eight heartworm-negative dogs were inoculated and then randomized to treatment with either a placebo or combination product dosed at 24 µg/kg moxidectin, 2 mg/kg sarolaner and 5 mg/kg pyrantel. Approximately five months after inoculation, efficacy was evaluated by adult heartworm counts at necropsy.

Part two examined 32 dogs treated with tablets containing only moxidectin (24 µg/kg) or only sarolaner (2 mg/kg). As in the first part of the study, efficacy was evaluated about five months after inoculation by adult heartworm counts at necropsy.

In part 3, a field trial, 410 dogs at least 8 weeks old from 23 veterinary clinics in heartworm-endemic regions of the Unites States were treated for 11 months with either the combination product (n = 272) or Heartgard Plus (ivermectin-pyrantel-Boehringer Ingelheim) (n = 138). Efficacy was evaluated on day 330 using antigen and microfilaria testing to assess adult heartworm infection.

Investigators found that dogs treated with moxidectin alone or in combination showed significantly lower worm counts than controls in both studies.

Increasing both the individual moxidectin dose and the overall number of doses improved efficacy, with 100% protection obtained using three doses of moxidectin at either 40 or 60 µg/kg. Three doses at 24 µg/kg were also highly effective, providing greater than 98.8% efficacy for all three strains of macrocyclic-lactone–resistant D. immitis.

The combination product was well tolerated in all studies. A single dose of the novel combination chewable product containing 24 µg/kg moxidectin, sarolaner and pyrantel prevented the development of heartworm infection. Treatments with moxidectin or sarolaner alone confirmed that heartworm prevention was due solely to the moxidectin component. Additionally, in the field study, no dog tested positive for adult heartworm infection when dosed with the combination product monthly for 11 months, while two dogs treated with Heartgard Plus tested positive.

Increasing both the individual dose and number of consecutive monthly doses of moxidectin improved its efficacy against macrocyclic lactone–resistant heartworms. Moxidectin administered at 24 µg/kg was selected as the optimal oral dose to develop as a safe and effective means of protecting dogs against heartworm disease in the face of increasing macrocyclic lactone resistance, and it appears to be safe and well tolerated as an oral combination product.

Dr. Miranda Spindel serves as the shelter medicine consultant and student advocate for the Veterinary Information Network. She initiated and completed the first residency in shelter medicine with a master's of clinical science through Colorado State University in 2007, then worked as the senior director of shelter medicine at the ASPCA for 10 years. She is a member of the Shelter Medicine Organizing Committee and Residency Committee for Shelter Medicine for the American Board of Veterinary Practitioners. Dr. Spindel lives on a small acreage in Colorado with her daughter and dogs, cats, chickens, horses and donkeys. 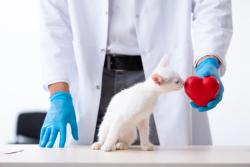