Something old, something new

A pre-existing gem, new-to-you building can be an architectural gem. Here's a look at how two practices preserved the charm of historic homes -- and met the growing needs of their businesses.

When you move your hospital into a pre-existing facility like a historic home, you build a new relationship between the established structural ambiance and the practice you've grown and nurtured from the ground up. Natalie Smith, practice manager at Cats Limited Veterinary Hospital in West Hartford, Conn., says the process isn't for the faint of heart. But if you do it right, the result can be just as stunning--and less expensive--than building new. And depending on your location, it might be your only shot at getting a building big enough to accommodate your growth and close enough to hang on to your clients.

In 1997, after six years in a 1,200-square-foot facility, the Cat Clinic of Johnson County in Lenexa, Kan., moved into a 3,000-square-foot historic home built in 1904. Cats Limited Veterinary Hospital is getting ready to move into a new-to-them facility-also an old house-just down the road from their current hospital of 13 years. "We've kept some of the features of the building intact, so it's true to its original style," Smith says.

She and Dr. Irene Schomacker, owner of the Cat Clinic of Johnson County, say they used these strategies to adapt some interesting elements of their existing buildings.

> Windows. If you're moving into a 150-year-old farmhouse, as Cats Limited is, you want to keep the classic feel while still adding new elements. Cats Limited added an extra curved window to give the space even more character. "It looks like it belongs there," Smith says.

> Doors. The Cat Clinic of Johnson County ran into one element where new and old didn't mix. Code compliance dictated that the doorways had to be 30 inches wide, and all of the antique doors were less than that. So Dr. Schomacker's carpenter took all the doors off and put picture framing around them to make them 30 inches wide. He then re-stained them to preserve the look.

> Stairways. When working with a city inspector, Dr. Schomacker discovered that the Cat Clinic of Johnson County needed one fire-code-compliant staircase. The house had two beautiful antique staircases, but they weren't compliant. "It needed a major renovation and I thought we would lose the ambiance," she says. "So we came up with the idea of an official fire escape staircase in the back." They had to add a door to the back of the building, but this approach preserved the interior staircases.

>Exterior. Both the Cat Clinic of Johnson County and Cats Limited Veterinary Hospital have embraced the architecture of their pre-existing facilities, and they've merged the look with their practice image.

The Cat Clinic of Johnson County used a drawing of the building in invitations to the new clinic and in all of their marketing and yellow pages advertisements. 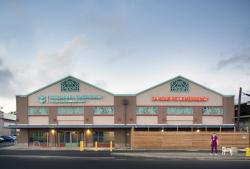 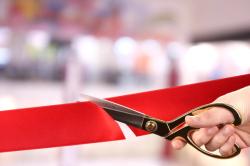