Setting new puppies up for success with parasitic preventives

The panel discusses what flea, tick, and heartworm preventives they each prefer and how to get staff buy-in to help recommend it to clients.

Adam Christman, DVM, MBA: So for the puppy visits that are coming in to you, we know that compliance gaps occur. So it's good to have a product that's easy to set them off for success. So what's the minimum age for Credelio and Interceptor Plus, then?

Katina Carter, DVM: Credelio is 8 weeks, and most people don't get their puppies before 8 weeks and Interceptor Plus is actually 6 weeks.

Adam Christman, DVM, MBA: Oh, okay. So you really could just start them right off for for success. Did that help you out, too, Kara as a pet parent?

Kara Johnson: Yes, for sure. I wanted to start immediately after first visit. Yeah, like as soon as we can start prevention, that is very important. So it was nice to not even . . . most dogs come in 8 week. I rescued him at 9 weeks. So it was perfect that I didn't have to feel uncomfortable giving something that young. But I know a lot of people definitely think about it. But it's marked nice and clear on the boxes, and it made me feel comfortable. It's like, alright, well, 6 weeks of age . . . he's 9. He can handle this very nicely.

Adam Christman, DVM, MBA: And let's talk about these compliance gaps. It's going to happen. It happens. You know, life happens, as we know, too. So what do you say to the pet parent? That's like, "Dr Katina Carter . . . It's been 8 months since I've given Interceptor Plus. What do I do? I'm so scared." Or, you know, what do we . . . how do we close that gap of compliance?

Katina Carter, DVM: First, they get 80 lashes with a wet noodle. Only then after that, honestly, I think the best wayfor compliance is to have the stuff at home. So we really talk about year-round prevention and sell 12 months, and we really talk about the rebates and things that they're doing. So we . . .

Bill Carter, DVM: Now they're on it for that entire year.

Katina Carter, DVM: I think that helps a lot with compliance gaps. And we also give them free doses, the first couple of times they come in as they're growing, so that it'll just become a habit. And by the time we finish seeing them, they're already 4 or 5 months old. Usually they can be on their adult dose, and then we can just get the whole year's worth. They have it at home. That helps a lot.

Adam Christman, DVM, MBA: Yeah. And Kara, do you find that . . . You know, compliance issues, obviously, is an issue. But what are some suggestions that you think you can tell, you know, clients out there that if there's some gaps or whatnot, how can they improve themselves on that?

Kara Johnson: I mean, just have to make sure really, to stay on top of it. As I said, I mark my calendar, I have an alarm set. Everybody has an iPhone these days, pretty much. Make sure you have an actual alarm set, but if you do miss here and there, just keep up with your regular vet visits. Make sure you drop off a fecal sample. I test his every 6 months just because I want to. Or a heartworm test or, you know, a snap test . . . something easy and simple. So if you do panic, and you forget, as long as you have a good veterinarian that's going to suggest the right things, which I've always felt confidence in my vets, then I know that I'm doing the best by my pet, that's for sure. But you just really have to try to stay on top of it. I know it's like, people are like, "Once a month, that's a lot." It's really not a lot. How many times you go on your phone a day? It would be you know, it'd be like if you were told to check your cell phone.

Bill Carter, DVM: Well, it's the same thing with cost. It's like, well don't have 3 coffees this month.

Kara Johnson: Exactly. The rebates are huge, though. It's like, and if you buy the 2 prevention's together, and you get a larger rebate, and you just scan the little barcode. I mean, I love that. And why not? If you're giving out 3 free doses with your 12 month supply, you should have no thought in just not taking it. That's should be the first thing you want to do.

Bill Carter, DVM: Then I'll tell them not to worry, you know. Like you said, what do you do with that client who's freaking out, you know, because they missed? Well, alright, calm down, you know, we'll run a test now. If it's negative, good. You know, it takes 6 to 9 months to develop an infection, you know, so we'll test it. You have heartworm, yes, 6 to 9 months to get that positive antigen test. Sotest again at that time, and God forbid your animal did get heartworm, we're going to catch it right away. We're going to treat it right away before it can cause Caval syndrome and wreck the heart and wreck the lungs. So I think telling them hey, at least at least you're honest with us, at least we figured this out, let's run a test. You know, it's not like it's been 5 years.

Katina Carter, DVM: Same with parasites, you know, intestinal parasites. All right, let's do a stool sample and get you back. You know, and just get you back on it. 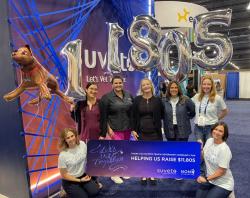