The panel discusses their personal strategies for increasing client compliance with parasitic preventives for flea, tick, heartworm, and more.

Adam Christman, DVM, MBA: Welcome back. In this segment, we're going to talk about 360. affection and 360 protection. I really like that, by the way. I think that's really good. And so, what it's all about what that means to your clients, as well as to your team members as well. And so, you know, one thing that we want to talk about to continue, we talked about zoonotic diseases a lot, too. And, you know, what does it mean when you have a client that comes in and they might have blown off [your advice] and [say], "My dog doesn't really need to be on anything. I've heard about [the fact that] I can get tapeworm or potentially hookwormm. That's not going to happen to me. What do you say to that type of client?

Katina Carter, DVM: I give them examples of exactly how it can and how easily it can. Many of our clients, of course, have children. And that's really all you need to say is, "How can you be sure that every time you touch that new puppy or kitten, every single time you are, first of all, that you're you're not kissing faces, and of course happens, but you're washing your hands every second?" Plus, the fact that they come with these parasites, and we need to clear them up and then protect them against it, you know, so we we do a lot of talking about that. We have big, long puppy talks.

Bill Carter, DVM: Handouts . . . puppy kits . . . where we go over the parasites. We do try to you know . . . I do try to hint at zoonosis without scaring them into it. You know, heartworm prevention is one. I'll talk about the recent case I saw with a dog from New Jersey who was never in the south of the United States and how that dog got heartworm, and how, you know, hint that that it's very expensive. So that's one avenue, but more so, do we want this damage in your pet's heart? This is where the worms live, you know, and sometimes, some people want pictures; they want visual aids. Some people, you know, are kinetic learners; they want to write things or work with their hands. So, you know, different avenues—social media, videos, handouts—because everybody learns a little bit differently.

Adam Christman, DVM, MBA: Right? I always like this line: It's better to proactively protect versus reactively treat.

Bill Carter, DVM: Oh, yeah. Exactly. [It is] better to be proactive than reactive.

Adam Christman, DVM, MBA: Yes. And Kara, so when you got your fur baby, Nestle, and everything . . . Walk us through what that visit was like to the veterinarian and what decisions went into your head about what should I put my baby on?

Kara Johnson: Yeah, so our first visit, I remember like not wanting to kiss him actually on his lips because I was very nervous about . . .

Adam Christman, DVM, MBA: Where did you get him from?

Kara Johnson: So I rescued him from the Humane Society in Tinton Falls in New Jersey. I saw his picture on social media, and I fell in love right away. I was like, called them . . . I went [and] we fell in love together. And as soon as we went to the visit, most important[ly] was I was pregnant. I was nervous. I was nine months pregnant. I didn't want to kiss him with any parasites. Gosh, we had that I would transfer the baby. And she was going to be born. So, I needed immediately to get him on a good prevention for intestinal parasites, especially being a tech. I'm very afraid of heartworm. So, I wanted him on the most effective heartworm prevention that there is and a good flea and tick medication because, of course, he's dark, so I don't want to have anything on his fur that I can't see. So, [he was] fecal tested. He did come back with two separate parasites. He had giardia and coccidia. So, I was very happy we didn't tongue kiss at the first meet. I didn't kiss [him].

Bill Carter, DVM: Giardia is no fun for a human.

Kara Johnson: Thank you and knowing that I could get that . . . So, we dewormed him [and] went through a couple different medications. [We] got that all knocked out and started immediately on Interceptor Plus and he has been on it the exact same day every month since we got him.

Adam Christman, DVM, MBA: That's wonderful. All year. So, walk me through that. So, he's on Interceptor Plus for his heartworm.

Kara Johnson: Heartworm and intestinal parasites. He's also on Credelio for his fleas and ticks, and that's pretty much it right now, thankfully. That's all he's got and I love Credelio. He loves both of them. He just . . . I could give them as a treat . . . a handful of food for the Credelio so that doesn't upset his stomach, and he chomps it up in 2 seconds. So, [it is] very important for me.

Adam Christman, DVM, MBA: Now, this is because I want to talk to you all about though these decisions that pet owners face. I want to make sure that it's safe and effective. Do they tolerate . . . Do they like the taste of it? So, what you're describing sounds like a pet parent's dream.

Kara Johnson: Chicken flavored for the Interceptor Plus and I literally pull that package out . . . he knows. If I peel it open, he'll come flying into the next room. He sits and he waits for his treat. And his Credelio, I throw it right in his food. That's probably the first thing he eats out of his breakfast every month.

Adam Christman, DVM, MBA: And how do you make sure that you stay on top of that?

Kara Johnson: I have it set in my phone, I have it marked on my calendar with a little checkbox. And because I'm crazy over the baby and myself not getting parasites, I know the day immediately. I wake up and the first thing I think of is I need to feed my dog his prevention. So, I can't even lie. That's actually all I think about, and I make sure and like mark the box, so my husband doesn't give it twice. And he would be glad to take it twice, but I can't do that. So, I made sure every month the phone alarm goes off, same time, same day, every single month and mark the box and I know he's got it, but I separate them. You don't have to but I do separate them. And I know the dates of both [so] that they're 2 days apart.

Bill Carter, DVM: I always tell puppies, you know, separate them initially. That way you know if their belly gets upset, which one it was. The one after that, yeah, give one in the morning and one of the evening or give them together. Yeah, I normally have them separated early on just to be . . .

Kara Johnson: You know, to not upset their stomach, which normally doesn't happen but . . .

Bill Carter, DVM: You see, it's just it's a safe thing to do. 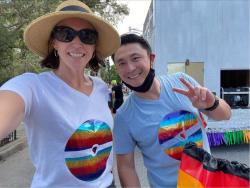 Allyship: the role we each can play to propel society forward