Renal biopsies: What are some benefits and risks

Recently, a colleague in private practice asked my opinion about the likely benefit of obtaining an ultrasound-guided percutaneous needle biopsy of the kidney of an azotemic, isosthenuric, 8-year old domestic shorthair cat. She indicated that evaluation of a serum chemistry profile, hemogram and urinalysis revealed findings consistent with idiopathic chronic renal failure.

Recently, a colleague in private practice asked my opinion about the likely benefit of obtaining an ultrasound-guided percutaneous needle biopsy of the kidney of an azotemic, isosthenuric, 8-year old domestic shorthair cat. She indicated that evaluation of a serum chemistry profile, hemogram and urinalysis revealed findings consistent with idiopathic chronic renal failure.

There was no evidence of bacterial UTI. The cat's systolic blood pressure was increased. The cat's owner requested that this veterinarian pursue additional diagnostics if they would be of probable benefit in devising treatment for renal failure.

Ultrasonographic evaluation of the cat's kidneys by a board-certified radiologist revealed that both kidneys were reduced in size. Uroliths were not observed. The consulting radiologist, who had experience with ultrasound-guided percutaneous needle biopsy of kidneys, was willing to perform this procedure if requested to do so. An advantage of ultrasonography is that the biopsy needle can be guided into portions of the kidney to minimize the risk of damage to large renal vessels and the renal pelvis. In addition, the kidney can be scanned for evidence of significant post-biopsy hemorrhage.

Notice the linear infarct in the renal cortex of the right kidney of a dog. A needle biopsy specimen taken from this region one week previously contained only tissue from the renal cortex.

In your opinion are the probable benefits of needle biopsy of this cat's kidneys likely to outweigh risks associated with this procedure?

What are the potential benefits of biopsy of kidneys associated with chronic renal failure?

Information obtained by renal biopsy may confirm, support or eliminate diagnostic probabilities formulated on the basis of the history, physical examination, laboratory data, and radiographic or ultrasonographic evaluation. Results of biopsy may be helpful in formulating prognoses and treatment plans for some diseases (Table 1).

Illustrates infarction of the caudal pole of the right kidney of a dog. A percutaneous needle biopsy containing cortex and medulla was obtained from this kidney one week previously.

In cases where renal biopsy permits establishment of a specific diagnosis, knowledge of the etiology facilitates formulation of specific therapy designed to eliminate or control the underlying causes of renal disease. Although specific therapy may not alter existing lesions, it may prevent further damage to nephrons and adjacent structures. In situations where microscopy does not indicate a specific diagnosis, the character and distribution of lesions may allow one to determine whether the disease process is likely to undergo partial or complete resolution, remain static, or become progressive and irreversible. Such information may be especially helpful in evaluating patients with acute renal failure associated with declining renal function or oliguria, despite appropriate specific and supportive therapy.

In some patients, properly performed serial biopsies of the kidney may also be used to monitor therapeutic efficacy, resolution or progression of renal disease.

At the current state of knowledge, however, biopsies are usually of little value to patients with chronic renal failure associated with kidneys of reduced size. Once the disease has progressed to this state of chronicity, it typically follows an irreversible and progressive course ultimately leading to uremia and death. In this situation, biopsy results are unlikely to provide information that would alter the therapeutic plan, which consists primarily of supportive therapy designed to modify or eliminate abnormalities that occur secondary to altered renal function.

What are some potential risks of biopsy of kidneys associated with chronic renal failure?

Postbiopsy complications often occur in inverse proportion to the experience of the individual performing this procedure. Percutaneous renal biopsy is not a procedure that can be studied in a book the night before and attempted for the first time the following day. Before attempting renal biopsy in a patient, individuals unfamiliar with the use of biopsy needles and techniques should gain experience by obtaining samples from animals at the time of euthanasia or from cadavers. Careful attention to procedural detail is essential if adequate biopsy specimens are to be consistently obtained without serious risk to the patient.

Even with ultrasound-guided biopsy performed by experienced individuals, biopsy of the kidneys has the potential to cause further renal damage. In addition to mechanical trauma directly caused by the advancement of the needle through the renal parenchyma, varying degrees of ischemia and infarction also occur secondary to disruption of perfusion of blood through vessels damaged by biopsy needles. Because renal arteries are end-arteries without collateral blood supply, sudden occlusion or transection of any portion of the arterial tree will be followed by ischemia and infarction of parenchyma distal to the site deprived of perfusion. Therefore, the overall severity of damage caused by needle biopsy of the kidney is primarily dependent on the size and number of renal vessels through which blood flow has been compromised.

Microangiogram of a 1.5 mm slice of kidney obtained from a normal adult mixed breed dog illustrating afferent arterioles, glomeruli, and some peritubular vessels. Note that larger arteries are not present in the renal cortex.

This mechanism (ischemia and infarction) may result in a significantly greater quantity of damage to nephrons than mechanical tissue damage directly caused by the needle. Damage to larger renal arteries, such as arcuate arteries located at the corticomedullary junction, may result in wedge-shaped infarcts (which in three dimensions are cone shaped; Photo 1). Because the kidneys of most cats are smaller than the kidneys of most dogs, the risk of damaging larger renal arteries is greater in cats when standard punch biopsy needles are used. Likewise, biopsy samples that contain tissue from the renal medulla are more likely to be associated with damage to larger vessels than samples obtained from the renal cortex (Images 1 and 2). For this reason, it is usually best to direct the long axis of the biopsy needle so that the biopsy tract is confined to the renal cortex (Figure 1). Even when biopsy tracts are confined to the renal cortex, however, linear infarcts are likely to occur (Photos 2 and 3).

Renal size should be considered when evaluating the risks of needle biopsy of the kidney. Reduction in the thickness of renal cortex as a consequence of chronic progressive renal disease increases the likelihood of needle damage to larger intrarenal vessels such as the arcuate arteries.

Excessive hemorrhage is a potentially serious complication of needle biopsy of the kidneys. Therefore, patients with a hemorrhagic tendency or hypertension should not be biopsied unless these abnormalities can first be adequately controlled.

How should renal biopsy samples be handled?

If a decision to perform a renal biopsy is deemed to be in the best interest of the patient, before performing the procedure, contact a laboratory familiar with evaluation of kidney biopsy samples for specific directions of how to process the sample. Specifically request information about how to process samples for standard light microscopy, immunohistochemical techniques, immunofluorecent microscopy and electron microscopy.

Now what is your opinion?

This photograph illustrates aninfarct in the caudal pole of the right kidney of an adult female Miniature Schnauzer. A Tru-cut biopsy needle was used to obtain a biopsysample from this region six months previously.

• Based on my knowledge of my own skill and experience with techniques of percutaneous kidney biopsies, would I consent to a kidney biopsy if I were this cat?

• What diagnostic, prognostic or therapeutic goals are likely to be achieved by evaluation of kidney biopsy samples?

• Will the benefits associated with the technique of ultrasound-guided kidney biopsy be sufficient to justify the associated risks and costs? 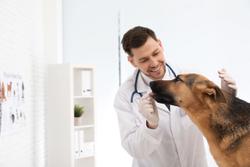