Practice positive: 3 lessons from pets for a happier life

Everything I need to know I learned from my dog when he was diagnosed with cancer.

“But we took him in just to get his teeth cleaned,” I said to my coworkers after taking my dog, Louie, to the veterinarian. Before I knew it the doctors were using words such as, “cancer” and “tumor” in the same sentence as him. I couldn’t believe it. He was showing no symptoms and wasn't having any problems. We biopsied the supposed worrisome area and waited for the biopsy results. At first I was convinced it was nothing, but then started thinking, “What if it is … ?” Up and down went my emotions until the biopsy results came back late on a Friday afternoon and those dreadful words appeared: squamous cell carcinoma, gingival. I couldn't believe it.

Right at work I had a complete meltdown. How was I going to tell my wife, my family, our friends? I didn’t know. As I drove home I planned an organized, well-developed speech. “Keep calm,” I told myself. “Let’s not freak out until we need to.”

When I walked in the door of my house I lost it. I could barely get the words cancer out to my wife. We talked about it and realized that we shouldn't totally lose it until we got all of the information from the planned CT scan on Monday.

Throughout the weekend my wife and I broke the news to our families and friends that Louie had cancer, but we told them and ourselves to keep calm until we knew all of the information. We convinced ourselves that everything would go smoothly on Monday. The day came for the CT scan and we proceeded with it without a hiccup. Afterwards I met with the oncologists and they informed me it wasn't in fact surgical and our options were either radiation or chemotherapy. Radiation, which would have likely cured him, wasn't without its risks and financial commitment. Chemotherapy alone had both positives and negatives as well. After much debate and discussion my wife and I decided to do chemotherapy alone.

We began the chemo in the middle of February. The night after Louie received it, my wife and I stared at him saying, "Does he look nauseous? Does he look miserable? What can we do?" We stared so much at Louie I’m pretty sure he thought we had lost our minds. As the weeks progressed Louie continued to thrive without much of a problem. Chemotherapy treatment two came and went, and then three and four. Before we knew it we were up to the 12th treatment. Louie received his last chemotherapy (his 12th treatment) on December 11th, 2013.

Throughout 2013 he felt better than he ever did, he was less itchy and he never stopped wagging his tail. Louie taught both my wife and I so many things.

1. No problem is ever big enough to stop being happy. Louie went through chemotherapy and was poked by needles every week and he didn't bat an eye.

3. If you show kindness to others, you get kindness back. Louie loved everyone and in turn everyone loved him.

Adam Oliver is a technician at Veterinary Specialty Care in Mt. Pleasant, S.C. He lives with his wife Tabitha, his dog Romeo and his cat Hamlet. 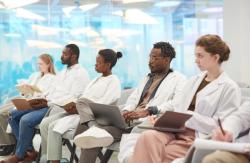