More than doubling the original practice size, this hospital set out to expand its space and business while holding tight to an 80-year tradition of pet care in the community.

The headline reads, "Monmouth now boasts finest dog hospital." Written in 1930, this article in the Asbury Park Sunday Press lauded a local veterinary facility for providing all number of creature comforts. Fast-forward 80 years, and the same headline still applies. Oakhurst Veterinary Hospital in Oakhurst, N.J., has been home to a long line of veterinarians—and the doctors still practice out of the original brick building on Monmouth Road. But to say there have been a few changes in these 80 years is a serious understatement.

In the 24 years that Drs. Scott Delaney and Gene Wefer, best friends and business partners, have owned Oakhurst Veterinary Hospital, they've added on and renovated twice for a total of 21,225 square feet. That's 14,525 more square feet than the original doctors had when they opened their doors in 1926. But while the current practice owners have added tons of technology, upgraded interior materials, and vastly increased the space, what hasn't changed is their commitment to great pet care and a devotion to the landmark building's signature look.

The doctors' efforts to expand with history in mind earned them a 2010 Veterinary Economics Hospital Design Competition merit award. They are enjoying a 10 percent increase in business, as well as the benefits of practicing in a beautiful, high-tech facility.

Holding on to the past while moving forward

What started as a 6,700-square-foot brick-face veterinary hospital in 1926 turned into a booming business over the years, with several generations of veterinarians practicing there before the business was sold to Drs. Wefer and Delaney in 1986. A need for more space and updated interior motivated the doctors to renovate in 2000, but it just wasn't enough. Shortly after completing the renovation, the doctors started planning the next phase of expansion.

One of their main goals—and obstacles—was undertaking such a huge expansion while retaining the history of the original building. "It would have been much easier and less expensive to have moved across town," says Dr. Delaney. "It was a huge challenge to do the renovation and expansion at the level we did, but we loved the building when we bought it 20 years ago and wanted to build something that would stand the test of time."

To maintain the original architecture of the hospital, the doctors and their builders took care to find and create bricks that matched the original bricks on the exterior. The brick mason built numerous small walls to compare with the exterior, finally settling on a combination of bricks mixed just so.

Another nod to the past is found in the wooden benches in the reception area. "We wanted to capture the feeling of the past in a high-quality way," says Dr. Delaney. "Our carpenter designed custom-made benches with an inlay of three colors of wood with details that really stand out."

Other challenges included matching the floors of the new addition up with the existing floors, keeping the practice up and running while building on the same lot (a neighboring business rented parking spaces to the hospital team so they could have a place to park during construction), and maintaining consistent design details throughout the building.

In 1986, the local newspaper ran a front-page article on the numerous technological advances at Oakhurst Veterinary Hospital—to wit, a single computer. The newspaper lauded Oakhurst as being modern, running on that one computer.

Many things have changed, but the folks at Oakhurst Veterinary Hospital still pride themselves on being on the cutting edge of technology. One of the major goals of their expansion efforts has been to be as technologically advanced as possible, says Dr. Delaney. During the 2000 expansion, the doctors installed 25 workstations and began moving toward electronic records, but there still weren't enough computers to make constant updating and access possible. Team members often found themselves waiting in line to update records. With this latest renovation, the hospital now boasts 68 computers.

Dr. Delaney also installed an instant-messaging program that allows anyone logged in to send a message to any other person or station instantly. "I can send a global message to all computers at once, to the whole reception area, or to just one person," he says. "This has reduced the amount of paging we do, and it's more efficient." The practice has used the program to alert the entire hospital when a pet has been euthanized or to ask receptionists when certain clients have arrived so the team can prepare for difficult appointments.

In the 2,000-square-foot employee training center downstairs, doctors use a 65-inch flat-screen television to broadcast digital radiographs, call up medical records, and watch training programs. A Bluetooth-enabled mouse/pointer allows doctors to give presentations from anywhere in the room and access files and documents on the practice's server for training and discussion.

The results of the expansion are astonishing. But getting there wasn't easy or cheap. Just replacing the practice sign—the same size and location as the old one—and adding a planter took eight months and cost $10,000 because of city red tape. And that's only the beginning of a long list of problems and expenses that tripped the doctors up along the way.

The biggest headache came from the city building department. Having lived and worked in the area for many years with no problems, even having won numerous awards for their building and gardening in the community, the practice owners didn't expect any trouble getting approved. But at every meeting, a new engineering problem seemed to arise. More than $200,000 went into a water recharge system the township required to help the practice control water runoff on the lot. More money went to hiring engineers to verify the work done. And to this day, the doctors have yet to receive about $20,000 of escrow retainer money due them—all because of strict landscaping demands.

Dr. Delaney says he doesn't think he could stomach another building project like this, but he's incredibly glad they made the move, despite the headaches. "A building is the stage that provides the image of the practice," he says. "We wanted our clients to know that we are always working to provide better service and care."

Sarah Moser is a freelance writer and editor in Lenexa, Kan. Post your comments on the dvm360.com Community message boards (see the "Comment on articles" board), or e-mail ve@advanstar.com. 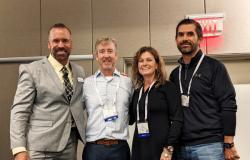