The U.S. Food and Drug Administration (FDA) recently released a preliminary inspection report of Diamond Pet Foods’ Gaston, S.C., production plant, which was linked to the company’s massive pet food recall in April. The recall was initiated after the Michigan Department of Agriculture and Rural Development detected Salmonella in an unopened bag of Diamond Naturals Lamb Meal and Rice dry dog food, which had been collected during routine retail testing of dry pet food. The recall quickly expanded and grew to include multiple varieties of the manufacturer’s products, all originating from the Gaston plant. According to the latest report from the U.S. Centers for Disease and Prevention (CDC), 16 cases of human Salmonella infection have been linked to one or more Diamond Pet Food products manufactured at the Gaston facility.

Shortly after the first recall was announced, the FDA began a weeklong inspection of the plant and observed that it failed on multiple counts to ensure product safety. Here are the FDA’s findings as detailed in its inspection report:

All reasonable precautions are not taken to ensure that production procedures do not contribute contamination from any source.

Specifically, no microbiological analysis is conducted or there is no assurance that incoming animal fat will not introduce pathogens into production and cause contamination of the finished product. Also, the firm’s current sampling procedure for animal digest does preclude potential for adulteration after sampling and during warehouse storage. On April 13, 2012, an employee was observed touching an in-line fat filter and oil with bare hands.

Failure to provide hand-washing and hand-sanitizing facilities at each location in the plant where needed.

Specifically, there are no facilities for hand washing or hand sanitizing in the production areas where there is direct contact with exposed finished food.

Failure to maintain equipment, containers and utensils used to convey, hold and store food in a manner that protects against contamination.

Specifically, paddles in one conveyor were observed to have gouges and cuts that exhibited feed residues. The damage to the paddles may have created harborage areas for microorganisms and are difficult to clean and sanitize.

Failure to maintain equipment so as to facilitate cleaning of the equipment.

Specifically, the firm utilizes cardboard, duct tape and other non-cleanable surfaces on equipment. These materials were observed to have residues adhering to them. The foam gaskets around access doors to the bucket elevators were observed to be in deteriorating condition and exhibited an accumulation of feed residues and dust.

According to the Diamond Pet Recall website, a thorough internal investigation was conducted of all systems and processes at the Gaston plant and corrective action was taken. Production and delivery have resumed at the facility. 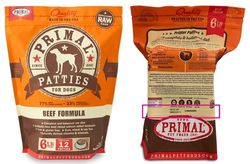