Clinical signs of hypercalcemia can be difficult to detect.

The number one ruleout for hypercalcemia in dogs is lymphoma. In fact, this is such a common cause that lymphoma must be pursued rigorously in any dog with hypercalcemia before another diagnosis is considered.

Parathyroid hormone-related peptide (PTHrp) is secreted by a wide variety of neoplastic cells (notably lymphoma in the dog), and has similar actions to those of PTH on bone but not on the kidney. Roughly 40% of hypercalcemic dogs with lymphoma has mediastinal masses, but hypercalcemia is common in other types of lymphoma as well. Hypercalcemia is much less common in feline lymphoma than in its canine counterpart. Other causes of hypercalcemia of malignancy include apocrine gland adenocarcinoma of the anal sac, and any tumor that has osteolytic activity. Such tumors include multiple myeloma and osteosarcoma. These tumors are thought to secrete cytokines that activate osteoclasts, thereby resorbing bone and elevating serum calcium concentrations.

The physical examination findings in animals with primary hyperparathyroidism are usually normal. An enlarged parathyroid gland is usually not palpable in dogs, but can be palpated about half of the time in cats with the disease. The problem with cervical palpation in cats is the difficulty in distinguishing a parathyroid adenoma from a thyroid nodule. Clinical signs of primary hyperparathyroidism are usually related to the effects of prolonged hypercalcemia rather than to the PTH-secreting mass itself.

Urinalysis is critical to the work-up of the disease. Calcium-containing crystals, isosthenuria, hematuria, and/or pyuria can be present. CBC is usually normal, but is necessary to rule out other causes of hypercalcemia. The serum chemistry profile, besides hypercalcemia, shows a normal or low serum phosphorus concentration. Azotemia can be present because of the deleterious effects of hypercalcemia on the kidney (renal mineralization).

In hypercalcemia of any cause, treatment of hypercalcemia is needed if the product of calcium x phosphorus exceeds 75. Fluid therapy is used to cause calciuresis and to increase glomerular filtration rate. Furosemide can also be used to promote urinary calcium loss. Glucocorticoids can be useful to promote urinary calcium excretion and to inhibit absorption of calcium from the gut, but extreme care must be taken to ensure that a diagnosis of lymphoma has been excluded. The phosphonate drug pamidronate can also be used to decrease bone resorption, so it is a logical choice in the treatment of hypercalcemia of malignancy.

To treat the primary condition, surgical parathyroidectomy is indicated. At the time of surgery, all four parathyroid glands must be inspected, although solitary gland involvement is by far the most common finding. Recurrence of hyperparathyroidism is extremely uncommon following surgery, and surgery is, therefore, almost always curative.

Post-operative care following a parathyroidectomy is critical because of the very high likelihood of post-operative hypocalcemia (iatrogenic hypoparathyroidism) even when normal parathyroid glands are left in place during surgery. In anticipation of this problem, vitamin D should be administered beginning two days prior to surgery and for a variable period afterwards. Vitamin D is commonly available in two forms (dihydrotachysterol (DHT) and calcitriol). DHT is the precursor to active vitamin D (1, 25-dihydroxycholecalciferol, or aka vitamin D3), and must be hydroxylated in the kidney to become active. The dose is 0.02 to 0.03 mg/kg/day divided BID, and it can take a week to become effective. Furthermore, it has a long half-life, so should vitamin D toxicity occur, it takes longer to subside. My preference is to use calcitriol (trade name is Rocaltrol), which is active vitamin D3. It does not require renal activation, has a quicker onset of activity, and the short half-life makes it much easier to manage iatrogenic vitamin D toxicity. The dose is 0.03 to 0.06 mcg/kg/day (30 to 60 ng/kg/day) divided BID. Along with vitamin D, calcium supplementation must be given. In an acute hypocalcemic crisis following treatment of hyperparathyroidism, IV calcium gluconate is given at a dose of 1 ml/kg of 10% solution slowly IV. This calcium preparation must be given slowly and the veterinarian should monitor for cardiac arrhythmia. Oral calcium supplementation is easier. Several calcium salts are available for oral administration, but the one with the most elemental calcium, and the one that is least expensive and most readily available is calcium carbonate (Tums antacid). Dogs should be given 1 – 4 grams a calcium daily, and cats are given 1 gm/day. Because calcium carbonate contains 40% elemental calcium, one 750 tablet contains 300 mg of calcium, so a cat would need approximately 3 tablets daily for calcium supplementation.

The duration of treatment for iatrogenic hypocalcemia is variable. Treatment should be withdrawn slowly and ionized calcium measurements should be monitored periodically. I prefer to withdraw treatment gradually at 2-week intervals beginning with the vitamin D therapy. BID calcitriol is reduced to once a day treatment, then to every other day treatment, then to every 4 day treatment. When the vitamin D therapy is at the every-fourth-day schedule, calcium supplementation is slowly withdrawn over several weeks. It must be noted that every animal is different, and the return of normal parathyroid gland function is impossible to predict. For this reason, calcium must be monitored frequently, and owners should be made aware of the clinical signs of hypocalcemia.

The first elelctrolyte abnormality in renal failure is usually hyperphosphatemia due to decreased renal blood flow, and calcium concentrations can drop by mass action. Hyperphosphatemia also stimulates PTH secretion from the parathyroid glands which can increase serum calcium concentrations. PTH also activates vitamine D and can cause bone resorption and increased calcium. Renal hydroxylation of vitamin D, however, is often impaired in renal disease, leading to relative vitamin D deficiency. Vitamin D deficiency leads to poor intestinal calcium absorption and further lack of PTH inhibition, helping to add to the syndrome of renal secondary hyperparathyroidism. This is a complicated system, and the pathogenesis of renal secondary hyperparathyroidism is incompletely understood. The end result, however, is that calcium is usually normal in dogs and cats with renal failure, and it does not require treatment.

The pathogenesis of hypercalcemia in hypoadrenocorticism is not completely understood either, but total calcium is probably elevated due to hemoconcentration. Because glucocorticoids promote renal excretion of calcium, lack of glucocorticoids could also be associated with increased resorption. The bottom line, however, is that hypercalcemia of Addison's disease is usually mild, and the ionized calcium concentration is usually normal. Treatment of hypercalcemia associated with Addison's disease is not necessary.

Most cases of vitamin D toxicity are iatrogenic, and occur following parathyroidectomy. In the past, vitamin D-containing rodenticides were used and were a more common cause of hypervitaminosis D, but those products are no longer marketed. Some pet owners can over-supplement their pets with vitamin D preparations intended as dietary supplements, and there are plants, notably the day blooming Jessamine (Cestrum diurnum) that contain vitamin D and can be associated with toxicity when ingested. Still, hypervitaminosis D is a rare cause of hypercalcemia.

Normally, the parathyroid gland responds rapidly to hypocalcemia by secreting PTH. This results in activation of vitamin D, increased renal resorption of calcium, and mobilization of calcium from bone, thereby normalizing ionized calcium in the extracellular fluid. In primary hypoparathyroidism, the parathyroid glands are destroyed by immune-mediated mechanisms, rendering the response to hypocalcemia impossible. While this disorder is uncommon, some breeds are predisposed. These include Toy Poodle, German Shepherd, Miniature Schnauzer, Labrador Retriever, and Scottish Terrier. The average age of dogs with hypoparathyroidism is 6 years, and there is a female sex predilection.

Physical examination findings in dogs and cats with primary hypoparathyroidism are usually normal. Historically, seizures occur in about 50% of cases. CBC and urinalysis findings are usually normal. Electrocardiography can show wide T waves, as well as prolongation of ST and QT intervals. The disorder is diagnosed by finding of low concentrations of PTH in the serum, and is treated as is iatrogenic hypoparathyroidism (see above).

As discussed above, hypocalcemia is common following surgical therapy for parathyroid gland adenoma or carcinoma. The most common type of iatrogenic hypoparathyroidism, however, is associated with thyroidectomy for treatment of feline hyperthyroidism. This occurs in roughly 10 percent of cats undergoing thyroidectomy, but it is largely dependent upon the skill of the surgeon performing the procedure. In my experience, the first clinical sign of post-thyroidectomy hypocalcemia is anorexia. Calcium should be monitored closely following any thyroidectomy, and treatment of hypocalcemia is the same as for post-parathyroidectomy hypocalcemia. The duration of calcium and vitamin D supplementation is difficult to predict. Some cats require post-operative supplementation for up to 6 months, but eventually normal parathyroid gland function returns.

Correction: This paper has been updated to correct the calcitriol dose units, which should have been mcg/kg/day (ng/kg/day), not mg/kg/day. 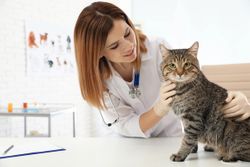