Lyme Disease: Experts Weigh in on the Controversies

Lyme disease (caused, in North America, by the spirochete Borrelia burgdorferi sensu stricto)1 is the most frequently reported vector-borne disease in humans2 and dogs3,4 in the United States.

The number of Lyme disease cases in people in the United States has tripled over the past 20 years. Notably, Ixodes scapularis and Ixodes pacificus—the 2 tick species that most commonly transmit the disease to people and dogs—have extended their geographic range over this time and have now been reported in half of all US counties.5

Correspondingly, Lyme disease is also becoming an increasing problem for dogs. Typically, infection in dogs occurs more commonly in areas with endemic populations of ticks and where acaricide use is not routine.6

Despite rising numbers of cases, however, diagnosis and treatment of the disease remain equally controversial in dogs and people. Here, two infectious disease specialists share their perspectives on some important aspects of this disease.

Co-infection with other organisms is a potential scenario in dogs with Lyme disease, says Annette Litster, BVSc, PhD, FANZCVS, MMedSci, a senior veterinary specialist at Zoetis in Chicago, Illinois.

Dr. Litster says that molecular technology is currently limited in its ability to identify co-infections with other Borrelia species in dogs. “Commercial laboratories need to develop protocols to pick up such co-infections on a test,” she explains. “Or someone in academia has to obtain research funding to do this.”

Nevertheless, she notes that knowing about co-infecting organisms may be of interest only, rather than of clinical importance—until we know what species make a difference to the diagnostic process. “We don’t have that information yet,” says Dr. Litster. Among the numerous barriers to identifying co-infections, she describes how researchers are challenged by currently available diagnostic tests. “Getting the right mix of primers for polymerase chain reaction is not easy,” she says. “And if we use antibody-based tests, are there cross-reactions between different antibodies that we need to be concerned about?”

She also addresses the difficulty of finding antigen in clinical specimens. Typically, because Borrelia migrate to the tissues early after infection, they are scarce in the blood. For diagnostic testing purposes, a tissue specimen—such as a skin biopsy sample from the site of the initial tick bite—is, therefore, more useful than a blood sample, although more difficult to obtain.

According to Raphael Stricker, MD, a tickborne disease specialist from the International Lyme and Associated Diseases Society in Bethesda, Maryland, several co-infections have been identified in cases of Lyme disease in people.7 “In particular, other rickettsias across the country can co-infect and complicate Lyme disease, making it very difficult to treat,” he says.

“We don’t truly know how many Borrelia-infected dogs develop clinical signs of Lyme disease,” says Dr. Litster, “because estimates in the literature are ‘guestimates’ that some experts have made, based on factors that include their case records and background rates.”

However, she discusses findings from the recent Lyme vaccine trial—a robustly designed study in which dogs underwent postmortem examination 90 days after infection. “In this study, 13 of 16 dogs had moderate histologic evidence of joint disease,” she says. “Inflammation was present in each dog in two or more joints. And in 9 of the dogs that inflammation was severe.”

Although the number of Borrelia-infected dogs that develop clinical Lyme disease remains unknown, Dr. Litster thinks it is higher than what is estimated in the veterinary literature. For example, the vaccine trial data found that most Borrelia-infected dogs had histologic evidence of joint inflammation, yet data in the 2006 consensus guidelines published by the American College of Veterinary Internal Medicine state that less than 5% of Lyme-seropositive dogs in one study showed lameness over a 20-month period.

Use of the Lyme vaccine now seems to be reducing the number of clinical cases of Lyme disease in dogs, Dr. Litster notes. However, no real data are available yet to allow comparison of the number of cases that involved clinical signs before and after vaccination, she adds.

Dr. Stricker stresses the huge disparity between reporting of Lyme disease in people and in dogs. According to the Centers for Disease Control and Prevention (CDC), between 2005 and 2014 only three cases of Lyme disease were reported in humans in Colorado.8 By contrast, data indicate that 515 cases of Lyme disease were reported in dogs in Colorado over a rolling 5-year period.9 “This highlights a serious underreporting in humans,” he says. “I think that dogs are the sentinels of the disease, and we get a much better idea of what is going on with Lyme disease by following these cases as they occur in dogs.”

Although many veterinarians use in-clinic SNAP tests to diagnose Lyme disease in dogs, the biggest headache they face is “what to do with the blue dot—positive healthy dog,” says Dr. Litster.

Due to the lack of data from a well-designed trial with robust study design to evaluate different protocols, Dr. Litster emphasizes that management of the blue dot—positive healthy dog remains subjective. Consequently, veterinarians must examine the available evidence and form their own opinion about how to manage these cases. “Opinions cannot be wrong because the evidence does not yet exist,” Dr. Litster stresses. “Clinicians need to make an informed opinion based on the available science.”

Diagnosis of Lyme disease in humans is also difficult,7 says Dr. Stricker. He discusses a gender bias, for example. “Women who develop Lyme disease tend to develop more significant symptoms than men do,” he says, “because the inflammatory response in women is more pronounced.” By contrast, he adds that “men show a higher rate of positive reactivity on Lyme disease testing than women do. So, men tend to respond more to the infection from a serologic standpoint, whereas women respond more from an inflammatory standpoint.” Therefore, men may show only mild symptoms of Lyme disease but react positively if tested for the disease and thus receive treatment. “Yet women, who may have more symptoms of Lyme disease, often tend to be seronegative and so do not receive treatment,” he says.10

What About Chronic Lyme Disease?

Much controversy exists among MDs about whether chronic Lyme disease truly occurs in people. “Despite the controversy in humans, however, chronic Lyme disease has been documented in dogs,” says Dr. Stricker. Dr. Litster adds that even some scientists who investigate Borrelia are not confident that Borrelia infection can be eliminated. “Doxycycline probably does not clear the infection,” she says. ï¿¼ï¿¼ï¿¼ï¿¼“But if doxycycline is administered to a dog with a competent immune system, even if the antibiotic does not completely clear the organism from the body, maybe the immune system can keep the organism at bay and prevent clinical disease recurrence.”

He also adds that the antibiotics used to treat Lyme disease are 60 years old and not very effective against the disease. With almost 400,000 new cases occurring in people each year, he stresses the need for better treatments. “We need designer drugs like those available for treatment of AIDS and hepatitis C,” he says.

Dr. Litster frequently prefers to use injectable cefovecin sodium to treat Lyme disease in dogs. Although not specifically licensed for Lyme disease, she says it has been shown to be effective against Borrelia species. In addition, a veterinarian who administers this long-acting formulation to an infected dog can be sure that the dog is receiving the appropriate course of treatment to guard against painful arthropathy and fatal nephropathy that can occur in dogs with Lyme disease.

“At least dogs also have some protection against Lyme disease in the form of vaccination and acaricides,” she adds. Neither of these options is yet available for people. Dr. Stricker notes that one Lyme disease vaccine that was used for people was unsuccessful because those who received it developed symptoms of Lyme disease. “And people often don’t use acaricides on themselves,” he adds.

Comparing the situation in human and veterinary medicine, Dr. Stricker concludes that veterinarians take Lyme disease far more seriously in their patients. “Animals will teach us a lot about Lyme disease,” he says. “Ultimately, we need to pay attention to them.”

The comments expressed in this article are the experts’ own and do not necessarily represent the opinions of their current or past employers.

Getting staff buy-in with parasitic preventives 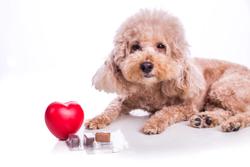 Not so lucky pennies