Leaky anesthesia machine? How to check the breathing system

Every veterinary anesthesia machine should be checked regularly for proper function. Heres how to evaluate your machines breathing system, which should be tested prior to every use.

The breathing system contains all the parts required to deliver the anesthetic gas mixture to the patient. The components of the breathing system should be inspected visually before each use to ensure they are not damaged. Because it is the most common source of anesthesia machine leaks (see sidebar), performing a leak test on the breathing system prior to every use is absolutely imperative.

Loose connections on breathing hoses or attachment to machine

Loose or cracked dome on either one-way valve

Worn rubber parts or gaskets on the CO2 canister

Debris present between rubber seal or gasket of CO2 canister

Rebreathing circuits use breathing hoses that are attached to the inspiratory and expiratory one-way valves (unidirectional valves), pop-off valve (adjustable pressure-limiting valve), reservoir bag, manometer, air intake valve (not present on all machines) and CO2 absorbent canister. The most common type of rebreathing circuit used in veterinary medicine is the circle system, which is designed so that gases flow in only one direction. The breathing hose configuration can be either paired hoses that are joined with a Wye piece (Y-piece) or a coaxial design in which the inspiratory hose is located inside the expiratory hose (Universal F).

Attach one breathing hose to the inspiratory one-way valve and the other to the expiratory one-way valve, and then attach the appropriate-size reservoir bag for the patient to the bag port. Alternatively, each component of the rebreathing circuit can be tested individually using the following steps:

Figure 1A. Testing components of the breathing system without the use of hoses or a reservoir bag. (Vetamac testing kit) (Photo courtesy of Michelle McConnell, LVT, VTS [Anesthesia & Analgesia])

Close the pop-off valve and occlude the patient end of the circuit with your thumb or palm. Do not use a pop-off occlusion valve to perform a pressure check. These valves are designed to leak after a certain pressure so they may prevent a true assessment of a leak-free breathing system.

Fill the system with oxygen by turning on the flowmeter or pressing the oxygen flush valve until a pressure of 30 cm H2O is reached on the manometer. Once that pressure is reached, turn the flowmeter off. Do not use the oxygen flush valve if using the scavenge tubing noted in the alternate methods for step 1. The sudden high pressure could damage delicate internal components of the anesthesia machine.

If no leaks are present in the breathing system, the pressure should remain constant for at least 15 seconds (Figure 2).

Open the pop-off valve slowly and observe the release of pressure from the reservoir bag. This ensures that the scavenging system and pop-off valve are working properly. Do not simply remove your hand from the patient port. A sudden drop in pressure could damage certain parts of the anesthesia machine. It can also cause absorbent dust to enter the breathing hoses and potentially come in contact with the patient's airway.

A variety of methods can be used to test the one-way valves, but I am most familiar with the pressure decline method, as described here.

How to assess the inspiratory one-way valve.

An intact inspiratory one-way valve will prevent gas flow back toward the machine. If no leak is present, the bag will remain inflated (Figure 3).

Figure 3. Assessing the integrity of the inspiratory one-way valve. The reservoir bag will remain inflated if no leak is present. (Photo courtesy of Darci Palmer, BS, LVT, VTS [Anesthesia & Analgesia])

How to assess the expiratory one-way valve.

An intact expiratory one-way valve should prevent gas flow out of the machine. If no leak is present, the bag should remain inflated (Figure 4).

Figure 4. Assessing the integrity of the expiratory one-way valve. The reservoir bag will remain inflated if no leak is present. (Photo courtesy of Darci Palmer, BS, LVT, VTS [Anesthesia & Analgesia])

A refrigerant leak detector (available from Amazon for less than $30) can be used to detect halogenated hydrocarbon vapor. This device will not quantify the concentration of inhalant or the parts per million, but it is more sensitive than a basic “sniff” test in exposing leaks that are present downstream from the vaporizer.

Steps to pressure check a circle rebreathing circuit (universal F hose configuration). A Universal F has the inspiratory hose inside the expiratory hose (coaxial configuration), so only one hose connects to the patient but at the machine end the hose splits so that each hose connects to its corresponding one-way valve. Follow the same procedure outlined above for pressure checking a Wye dual-hose configuration. In addition, the inner tube should be tested in the same manner as the Bain coaxial circuit (see below).

Pressure check for a non-rebreathing circuit (Bain coaxial using a Bain block). A Bain coaxial circuit is commonly used in conjunction with a Bain block that can be mounted on the anesthesia machine. This allows the circuit to use a reservoir bag port, manometer and pop-off valve.

Follow steps 2 through 5 outlined above for checking a rebreathing circuit. Note that even if the pressure remains constant there is no guarantee that the inner tube of the coaxial circuit is leak free. There are two methods to evaluate the inner tube: the occlusion test and the oxygen flush test.

Turn the flowmeter to 2 L/min and close the pop-off valve.

Occlude the inner tube at the patient end with a pencil eraser or syringe plunger for no more than 2 to 5 seconds.

If the float in the oxygen flowmeter drops, then the inner tube is leak free.

Close the pop-off valve and occlude the patient end of the circuit.

Turn the flowmeter off and release the patient end of the circuit.

Activate the oxygen flush valve and observe the reservoir bag. The reservoir bag should deflate slightly (Venturi effect) if the inner tube is intact.

If the inner tube is detached from the machine end of the circuit, then the reservoir bag may inflate instead of deflate during this test.

Darci Palmer became a veterinary technician specialist in anesthesia and analgesia in 2006. She holds the executive secretary position for the Academy of Veterinary Technicians in Anesthesia and Analgesia. Darci is an instructor for the Veterinary Support Personnel Network (VSPN) and an administrator for the Facebook group Veterinary Anesthesia Nerds. 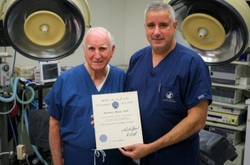 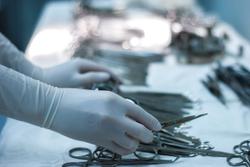