Election 2016: Where our presidential hopefuls stand on veterinary issues

Heres a look at how Hillary, Bernie, Ted Cruz and The Donald might vote on three animal-welfare and veterinary-practice issues the AVMA considers critical.

We think this Chihuahua is an undecided voter, but is definitely interested in issues affecting animals, pets and vets. (Photo by Getty Images)Unless you live under a rock, you're seeing presidential campaign ads and hearing lots of campaign news these days.

Just in case the rock you live under is called “practicing veterinary medicine,” here's the quick rundown: Hillary Clinton is the Democratic nominee, and Donald Trump has triumphed over the naysayers to land the Republican nomination.

From a strictly veterinary standpoint, do we have a “dog in this race”? Maybe we do, considering three hot-button issues the American Veterinary Medical Association (AVMA) follows closely. I reached out to the candidates for their stance on these three important issues. I got no response, so we're left to consider the views along party lines and based on voting history and published interviews.

Would they fight animal cruelty?

Bill 2293 (Preventing Animal Cruelty and Torture Act) was introduced by Rep. Lamar Smith (R) and Sen. Pat Toomey (R) in May 2015. The bill would amend federal crime codes to prohibit engaging in conduct in which an animal is intentionally and seriously injured.

Where would the candidates fall on this?

• Given her voting record on animal-welfare issues, Clinton would likely support the bill.

• Trump, in an exclusive interview with animal-rights blogger Andrew Kirschner, said he'd be “the best president for animals God ever created.”

Would they tackle veterinary student debt?

The Veterinary Medicine Loan Repayment Program Enhancement Act was introduced by Sen. Mike Crapo (R) in February 2015 and by Rep. Adrian Smith (R) in July 2015. The act would provide loan repayment and tax deductions for veterinarians who agree to practice in specific areas of need throughout the country.

The Student Loan Refinancing Act and Student Loan Interest Deduction Act, introduced by a number of Democratic representatives, would remove restrictions on refinancing federal student loans and expand tax deductions on student loan interest. The AVMA is actively lobbying in Washington, D.C., for this one.

Because of mixed-party support for bills like these, it's hard to say how the president-elect would respond. But let's try!

• Given Clinton's proposal of the New College Compact to reduce interest rates for student loans, she would likely be in favor.

• Trump has publicly criticized the fact that the federal government makes money on student loans.

Would they support mandatory prescriptions?

The Fairness to Pet Owners Act, introduced by two Democratic senators and one Republican senator in May 2015, would require veterinarians to provide a written prescription to all clients to fill anywhere, whether those clients want one or not. Republican Rep. Jason Caffetz (R) introduced it in July 2015. The AVMA is fighting this bill.

Because of bipartisan support, any of the candidates as president-elect might champion the bill despite its potentially adverse effect on us veterinarians.

Of course, with so many issues, viewpoints and priorities, the choice for president is much broader than each candidate's likelihood to vote the way veterinarians would hope. And we're a pretty diverse group ourselves.

My takeaway? Staying aware of issues affecting animals, veterinary medicine and veterinary business-and doing your part to make sure all your elected representatives know how you feel-is perhaps a more direct route to making your voice heard than your single vote for president in November.

Kathryn Primm, DVM, owns and practices at Applebrook Animal Hospital in Ooltewah, Tennessee, and is the author of Tennessee Tails: Pets and Their People. 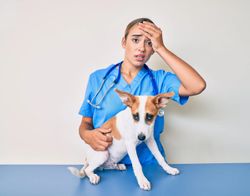