North Grafton, Mass.- Cats living with smokers are twice as likely to acquire malignant lymphoma than those in non-smoking households, reports Tufts University veterinarians and a scientist from the University of Massachusetts.

North Grafton, Mass.- Cats living with smokers are twice as likely to acquire malignant lymphoma than those in non-smoking households, reports Tufts University veterinarians and a scientist from the University of Massachusetts.

In a study published in the August 1 issue of the American Journal of Epidemiology, Dr. Elizabeth R. Bertone, an epidemiologist, and Drs. Antony S. Moore and Laura Snyder, both veterinarians, link second-hand smoke to cancer in cats, debunking a once-widely held belief that feline sarcoma is a byproduct of feline leukemia virus.

The report, entitled "Environmental Tobacco Smoke and Risk of Malignant Lymphoma in Pet Cats," is the first of its kind. Moore admits he's surprised by the connection. Smoking, he says, wasn't an initial target.

"We were interested in lymphoma because it's the most common cancer in cats and not very treatable," he says. "At the same time, we wanted to figure out why we were seeing more feline lymphoma when leukemia virus was becoming less prevalent. We looked at flea control products, diet and other variables, and smoking came out very strongly.

"It was very surprising. So many other things cause lymphoma in humans, smoking is often overlooked."

In sharing their lives and living space with humans, cats are exposed to many of the same environmental contaminants as their owners, including tobacco smoke. Exposure levels in indoor cats might read even higher than those of human household members who can spend time away from the home. Cats not only inhale smoke, they also ingest particulate matter by licking it from their fur while grooming, the study says.

"We believe that feline exposure patterns to environmental tobacco smoke may mimic those of young children living in households where adults smoke and where the children inhale tobacco smoke or ingest particulate matter by mouthing contaminated objects," says Bertone, the study's lead author.

Feline lymphoma is the most common cancer in domestic cats, often involving their intestinal tracts or nasal cavities. Tracking the disease, Moore and his colleagues conducted their case-control study on 180 cats treated at Tufts' Foster Hospital for Small Animals between 1993 and 2000. Eighty of those cats were treated for lymphoma and 100 were treated for renal failure.

Adjusting for age and other factors, the study shows the relative risk for lymphoma for cats exposed to any household tobacco smoke rated almost two-and-a-half times more than that of cats not exposed. The risk increased according to the duration and level of the cat's tobacco exposure, leaving those exposed five or more years at more than triple the risk of other cats, the study says.

"I'm pleased with these numbers from the point of view that this has raised people's sensitivity that the lifestyle choices they make affect everyone around them, including pets," Moore says. "They might not stop smoking for themselves or their families, but they might for their cat." 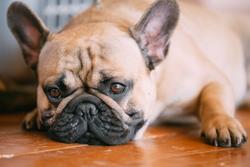