Cataracts: How to uncover the imposter lenticular sclerosis

Diabetes mellitus leads to cataracts in dogs via the sorbitol pathway, which is activated in hyperglycemia.

The lens is an organ of paradox. When it comes to vision, it has the power to giveth and the power to taketh away.

This crystalline disc, which places objects before the retina by facilitating light refraction and — in dogs and cats — minimal accommodation can impede eyesight through the formation of cataracts.

Not only must we as clinicians be able to characterize each cataract in order to manage it properly, but also we must be able to differentiate cataracts from their imposter, lenticular or "nuclear" sclerosis, a common and normal age-related change that can mimic cataracts in appearance but likely doesn't disrupt vision.

"If the dog or cat is (at least) 8 or 10 years old and does not have significant visual deficits, the odds are better that it's nuclear sclerosis than cataracts," says Carmen Colitz, DVM, PhD, assistant professor of ophthalmology at The Ohio State University College of Veterinary Medicine.

While older dogs and cats both commonly experience nuclear sclerosis, dogs far outpace cats in the occurrence of cataracts. Among canine mixed breeds, cataracts occur with a prevalence of 1.6 percent. Primary breed-related cataracts are also common; more than 60 breeds have been reported to have primary cataracts above the hybrid baseline, and they are on the rise at North American veterinary teaching hospitals, increasing from 0.95 percent (1963-1994) to 2.42 percent (1994-2003).

The lens is primarily water (65 percent) and protein (35 percent). By dry weight, it is almost entirely protein; only minuscule amounts or organic ions and phosphates, nucleic acids and metabolites are present.

Most pets with cataracts are presented because the owner notices related behavioral changes, such as bumping into furniture or exhibiting uncharacteristic trepidation when walking.

Throughout life, new lens cells are constantly produced at the cortex, forcing older cells inward toward the nucleus. As the lens fibers become more tightly compressed with age, the lens grows denser and harder, producing light scattering and haze characteristic of nuclear sclerosis. This cloudiness is probably associated with increased insoluble proteins and decreased soluble proteins.

Because the lens is avascular, lens metabolism — and transparency — is subject to alterations in the composition of the surrounding aqueous humor. Metabolic changes, such as increases in the levels of glutathione, insoluble proteins and hydrolytic enzymes, can result in cataracto-genesis.

When the composition of constituent proteins changes, the lens homeostasis becomes disrupted and the hydration status changes. Intracytoplasmic swelling and vacuolization ruptures the normal arrangement of lens fibers.

Nuclear sclerosis becomes apparent in dogs and cats around the age of 7. Breed and gender are not thought to play a role in the development of nuclear sclerosis, but sun exposure can accelerate sclerotic changes in the lens.

Cataracts have many causes, from genetic to metabolic, nutritional to toxic, traumatic to inflammatory. Cataracts in cats, which occur rarely, are usually a consequence of chronic uveitis. Some purebreeds, such as the Maine coon cat, have inherited cataracts. Cataracts also have been reported in kittens fed older-generation commercial milk replacers.

In dogs, the primary cause of cataracts is genetic in predisposition. In most breeds studied, the mode of inheritance is simple autosomal recessive. "At-risk" breeds include the American Cocker Spaniel, Boston Terrier, Toy Poodle, Siberian Husky, and Miniature Schnauzer. (For a complete list of affected breeds, see the American College of Veterinary Ophthalmologists publication entitled Ocular Disorders Presumed to be Inherited in Purebred Dogs.) Inherited canine cataracts typically afflict the young-adult animal and can often develop slowly during several years.

Congenital canine cataracts, which are not inherited always, begin during fetal life. They may result from maternal influences in utero, or may be associated with other ocular abnormalities, such as persistent pupillary membrane, persistent hyaloid artery and microphthalmia.

Diabetes mellitus leads to cataracts in dogs via the sorbitol pathway, which is activated in hyperglycemia. Sorbitol accumulates in the lens, altering the osmotic pressure and disturbing the lens proteins.

Additional causes of cataracts in dogs include electric shock, radiation, infections, eye trauma, toxin exposure and other intraocular diseases, such as uveitis, glaucoma and retinal degeneration. In the case of progressive retinal atrophy (PRA), secondary cataracts are caused by dialdehyde toxins that leach out from the degenerating retina. The breeds most commonly afflicted with cataracts in association with PRA are the Toy and the Miniature Poodle and the Labrador Retriever.

A young dog's normal lens is clear, but exhibits a greenish shine when illuminated. The lens of an eye with cataracts or nuclear sclerosis appears cloudy.

In ambient light, a sclerotic lens has an even, pearly opacity with a grayish-to-bluish tinge. Cataracts, on the other hand, appear like whitish chunks of crushed ice that vary in size, shape and opacity. While nuclear sclerosis affects both eyes equally and simultaneously, cataracts may be uni- or bilateral.

Because cataracts and nuclear sclerosis can appear similar on casual observation, owners sometimes suspect cataracts in pets with the latter. In some cases, the distinctions are so subtle, they can confound veterinary assessment.

In private practice, retroillumination (slit-lamp evaluation) is the best means of characterizing lenticular changes. The room should be darkened, and the light source, held at arm's length from the patient, should be moved slowly from side to side.

When nuclear sclerosis is present without cataracts, the full fundic reflection is visible, and the outline of the lens nucleus may be apparent.

Cataracts that are strictly nuclear are likely congenital or developmental, and nonprogressive. Those in the lens cortex are typically acquired and progressive.

Incipient cataracts are early opacities that involve less than 10 to 15 percent of the eye and do not affect vision. Immature cataracts are opacities that are more marked but still incomplete. The lens begins to swell, sight is often affected, and the fundus may be partially obscured ophthalmoscopically. Mature cataracts often produce complete lens opacity, clefts and intumescence (lens swelling).

In the hypermature stage, degradative enzymes are released from degenerative and ruptured lens fibers, and cause further proteolysis within the lens. The lens capsule begins to shrink and the anterior chamber deepens. Liquefaction and resorption of the cataract may result in areas of the tapetal reflection becoming visible. As hypermature cataracts advance, the lens nucleus may sink ventrally, resulting in a "Morgagnian" cataract.

It is impossible to accurately forecast the rate of cataract progression. Acquired cataracts may mature over months to years, while diabetic cataracts seemingly develop overnight and may mature in a matter of weeks. Some affected animals undergo lens capsule leakage and cataract resorption. Others have cataracts that, once mature, remain stable indefinitely.

Nuclear sclerosis does not significantly impair vision. But cataracts — the most common cause of blindness in dogs — can, depending on their size and stage. Most pets with cataracts are presented because the owner notices related behavioral changes, such as bumping into furniture or exhibiting uncharacteristic trepidation when walking.

While cataracts that are adequately large or axial to obstruct the passage of light to the retina, the degree of vision loss is variable, and it can be difficult to correlate with ophthalmic findings.

Cataracts can also predispose the animal to other serious eye problems. The chief sequela to hypermature cataract is lens-induced uveitis, which results from the leakage of antigenic material from the lens into the anterior chamber. Anterior uveitis causes blepharospasm, conjunctival hyperemia, miosis, aqueous flare, ciliary spasm and hypotony. If left untreated, chronic uveitis can lead to glaucoma, retinal detachment and permanent blindness.

Cataract surgery is indicated whenever lens-induced uveitis is present. Ophthalmologist Carmen Colitz also recommends surgery when cataracts are in the mid- to late-immature stage, are progressing rapidly, or when vision loss seems to have exceeded 40 percent. Surgery performed early has improved the success rate of more than 95 percent, she estimates. Surgery done in the hypermature stage carries an 85- to 90-percent success rate, due to increased risk of developing glaucoma and retinal detachment postoperatively.

Prior to recommending surgery, electroretinography (ERG) should be performed to assess retinal function. Uveitis and any underlying medical conditions, such as diabetes mellitus, should be stabilized before surgery. And when cataracts are the result of a patent hyaloid artery, surgery in young animals should be postponed until these embryonal structures regress.

The surgical procedure, phacoemulsification, involves ultrasonic destruction of the lens. The softened lens material is then aspirated from the capsule. An intra-ocular lens is implanted within the empty capsule, restoring refractive and focusing ability. In rare cases, such as lens luxation, removal of the lens capsule is also indicated. Some ophthalmologists suture in an intraocular lens.

Postoperative medications should be administered to reduce the risk of complications like infection, inflammation, bleeding and scarring.

In some cases in which cataract surgery is not indicated or not an option, topical mydriatics can be used to improve vision.

As for the question of when to refer a patient with cataracts to an ophthalmologist, Colitz recommends: "Refer them to a specialist as soon as you first notice a cataract because you can't predict how quickly it will progress."

Nuclear sclerosis is an inevitable old-age change that cannot be prevented. As for cataracts, genetically predisposed dogs and even the most well-regulated diabetics likely will develop them.

But there are several cataract risk factors that your clients can control: Advise them to minimize their pet's exposure to pesticides and other environmental toxins; to seek prompt treatment for predisposing conditions, such as uveitis and eye trauma, and to refrain from breeding dogs who have inherited forms of cataracts.

Joan Capuzzi Giresi, VMD, is a veterinarian and journalist living in the Philadelphia area. 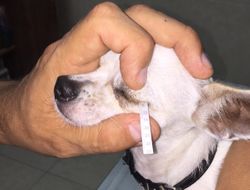 Diagnosis and treatment of dry eye in dogs 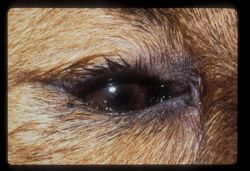 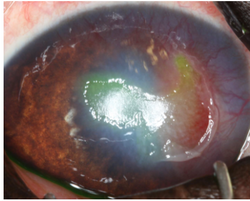 Image Quiz: Can you name these ophthalmic conditions? (sponsored by Nationwide)