Long-term prognosis is encouraging after cytoreductive surgery and radiation therapy in a young pug-beagle crossbreed.

On presentation, the routine physical examination was normal, except the dog was overweight (BCS, 7/9). On neurologic examination, the dog displayed a normal mental state and normal cranial nerves but was paraplegic (lack of voluntary motor function of the pelvic limbs).

Based on the neurologic examination, the neuroanatomic diagnosis was a severe, focal or diffuse T3 to L3 myelopathy. Based on the signalment, history, and examination findings, the differential diagnoses consisted of:

Complete blood count and serum chemistry findings were normal. Magnetic resonance imaging (MRI) of the vertebral column from C7 to L7 vertebrae was performed with a 1.5T Philips system.

Treatment options were discussed with the owners. Options included palliative care with corticosteroids and analgesic medications or surgical intervention in an attempt to achieve gross cytoreduction of the mass (surgical resection). Given the severity of the clinical signs, euthanasia was also considered. Based on the severity of the clinical signs and MRI findings, the owners elected cytoreductive surgery.

A right-sided hemilaminectomy was performed from the T13 to L2 vertebrae. The meninges at that site appeared grossly red-brown (Figure 2).

Histopathologically, the mass was composed of two (biphasic) populations of neoplastic cells (Figure 4):

Postsurgical day 2 and discharge at day 4

MRI is ideal for identification of neoplasms involving the vertebral column and/or the spinal cord. While radiographs can be useful in identifying neoplasms that involve bony structures, which cause bone proliferation or lysis, many neoplasms will not cause such changes or may only involve soft tissues.

Injection of iodinated contrast medium into the subarachnoid space is invasive and is accompanied by risks including worsening of clinical signs, iatrogenic spinal cord damage, and seizures. Moreover, with severe spinal cord compression or extensive spinal cord swelling, there may be a lack of contrast medium in the subarachnoid space which hampers interpretation. Likewise, improper injection technique in which contrast medium enters the epidural space may create non-diagnostic images. Crosssectional imaging such as computed tomography (CT) and MRI are preferred imaging techniques for the evaluation of the vertebral column and spinal cord. CT combined with myelography (iodinated contrast in the subarachnoid space) improves the diagnostic utility over CT alone. However, MRI is considered the gold standard for imaging of the vertebral column and spinal cord as it provides for excellent contrast resolution which enables differentiation of the various tissues.2,3 With MRI, lesions are characterized based on signal intensity (the shades of the gray scale from white [hyperintense] to black [hypointense or signal void]), size, shape, and delineation of a lesion, location of the lesion in relationship to the meninges, extent of spinal cord compression, and degree of contrast enhancement. Such MRI characteristics allow for a presumptive diagnosis of various neoplastic and non-neoplastic lesions. As in the case herein, signalment, history, and MRI characteristics combined with the location and extent of the neoplasm may suggest a specific histologic type of neoplasm. Although MRI can suggest a relatively accurate presumptive diagnosis, definitive diagnosis necessitates microscopic evaluation of a lesion.

Classification of the location of the neoplasm in relationship to the meninges and spinal cord helps prioritize an accurate differential diagnosis, which enables clinicians to provide owners with therapeutic options and prognosis.

A transverse section through a canine embryo illustrating development of the mesoderm into three divisions (paraxial mesoderm [somite], intermediate mesoderm, lateral mesoderm) that each give rise to different tissue types.

Spinal cord nephroblastoma is an embryonic neoplasm that is theorized to arise from portions of the nephrogenic primordium (intermediate mesoderm), which develops into the adult kidney (Figures 6 and 7). Nephrogenic primordium is thought to become entrapped within the developing meninges and undergoes postnatal malignant transformation (Figure 8).1,6

Given the location of the developing kidneys, spinal cord nephroblastoma typically occurs between the T9 and L3 vertebrae6-8 and causes a T3-L3 myelopathy. Owners can recognize this as a progressive pelvic limb gait abnormality, often with asymmetric signs as described in this dog.1,7 Progression typically occurs over days to weeks. Affected dogs display varying degrees of pain. In some cases, affected dogs may not appear in pain at all.

Nephroblastoma is the canine analog of the human Wilms tumor, and an immunohistochemical test is available to detect Wilms tumor antigen (WT-1) in cases of suspected canine nephroblastoma.9 With immunohistochemistry, nephroblastoma typically shows positive WT-1 immunoreactivity, although one study of 11 histologically confirmed spinal nephroblastomas revealed that two tumors did not stain positive with WT-1 antibody, indicating that a combination of immunohistologic features is ideal for diagnosis.7 Other identifying features include positive staining for epithelial markers (cytokeratin) and blastemal markers (vimentin),10 with lack of labeling for markers of cells of neuroectodermal origin (GFAP).11 Although it is not known why some nephroblastomas do not show positive WT-1 immunoreactivity, this test may still help confirm the diagnosis in cases that may not display typical histomorphology.

On MRI, a spinal cord nephroblastoma typically presents as a focal, well demarcated mass that causes variable degrees of compression. A spinal cord nephroblastoma may appear as an intraduralextramedullary or intramedullary lesion. The mass is typically T2-hyperintense and T1-iso to T1-hypointense in comparison to the spinal cord. The mass strongly and uniformly enhances. Varying degrees of T2-hyperintensity may be seen in the spinal cord as a result of vasogenic edema or gliosis. Metastasis is rare but may be identified elsewhere along the spinal cord. In one report of a 2-yearold Basset hound, two lesions were identified: one intradural-extramedullary mass at the T11-12 spinal cord segments and a second intradural-extramedullary mass affecting the spinal cord between the L4 through L6 segments. Histologically, both masses were diagnosed as spinal nephroblastoma based on morphologic and immunohistochemical staining characteristics.12 The mass in the lumbar segments had more features of malignancy, displayed less differentiation, and infiltrated the nerve roots and perivascular regions of the spinal cord white and grey matter. Therefore, the mass at T11-T12 was considered the primary neoplasm whereas the mass located in the lumbar vertebral column was considered metastatic. While less likely, separate de novo neoplasms were also considered. Given that the spinal cord nephroblastoma was located within the subarachnoid space, a potential route of metastatic spread could have occurred via migration in CSF. Spread along the subarachnoid space has been proposed as a means of explaining multifocal lesions in which the histologic appearance of the lesions did suggest that one focus was the primary tumor while the other sites represented metastases.13 Spread along the route of flow of CSF (ie, within the ventricular system of the brain, central canal of the spinal cord, or subarachnoid space) is known to occur with other neoplasms that are adjacent to CSF such as choroid plexus neoplasms.14 Alternatively, metastasis may have been hematogenous.

Conservative therapy often consists of corticosteroids and analgesics.6 Regardless of the mechanism of effect, conservative therapy typically loses efficacy as the neoplasm continues to grow and compresses the spinal cord.6 Definitive therapies include cytoreductive surgery alone or combined with radiation therapy. The disparity between the following two studies is not understood but may reflect the small case numbers in each study. Differences in owner decisions to euthanize an affected patient, surgical techniques and experience, or location of the neoplasm (ie, whether there is spinal cord invasion) also may be factors affecting the reported survival time in these reports:

Although the benefit of cytoreductive surgery has been studied, few reports have detailed the efficacy of radiation therapy as adjunctive or sole treatment in dogs with nephroblastoma of the spinal cord.

As demonstrated, present-day recommendations for radiation therapy vary in an effort to minimize late radiation-induced side effects. The benefits of highly conformational techniques, such as intensity-modulated radiation therapy and volumetric modulated arc therapy, remain unknown.

While the current literature suggested a guarded prognosis, this case reported here, along with isolated case reports, exemplifies the potential for marked, long-term survival following cytoreductive surgery and radiation therapy in dogs with nephroblastoma affecting the spinal cord. Further studies are needed to document the therapeutic benefits of cytoreductive surgery or radiation therapy alone or in combination.

Moreover, until improved prognostic indicators can be identified and survival times defined, clinicians should not only provide owners with survival times as reported in dogs with spinal cord nephroblastoma but also cautiously describe anecdotal case examples that highlight the potential for long-term survival with cytoreductive surgery and radiation therapy. Ultimately, practitioners should consult an ACVIM board-certified neurologist or oncologist or an ACVR board-certified radiation oncologist for current recommendations in dogs with spinal cord nephroblastoma. 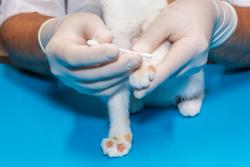 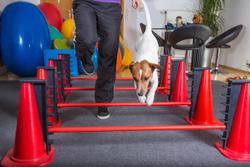