Dogs are detecting human cancer today, so a team of North Carolina veterinary school researchers is exploring whether that same ability could be turned to help dogkind.

A team at the North Carolina State University College of Veterinary Medicine has taken a cue from those studying canine scent detection of human cancers to see if those same skills can be applied to another group-namely, other dogs.

“Our work was based on the research literature of dog scent detection of human cancers,” says research associate Melanie Foster. “We already had scent detection dogs trained for the purpose of explosives detection. We thought, could these dogs be trained to detect cancer in other dogs-similar to their ability to detect human cancer?”

The goal was not necessarily to start using dogs as a diagnostic method for canine cancer, Foster says. But if some dogs could be trained to reliably detect certain types of canine cancers, then perhaps that would lead to the identification of a cancer biomarker that could be used as a clinical diagnostic tool.

“Transitional cell carcinoma of the urogenital tract is fairly common, making up about 2% of canine cancer cases,” Foster explains. “Being a cancer of the urinary bladder, one would expect that a urine sample would have high levels of indicators of what is being produced by those cancer cells. We decided to pursue our first test case, obtaining urine samples from dogs that had been diagnosed with transitional cell carcinoma and compare them to urine samples from control (noncancerous) dogs.”

The team began by training the dogs to choose between one control and one cancer sample-two samples per trial, Foster states. The dogs would sniff each container and get a treat if they successfully selected the cancer sample. The dogs learned to do that quickly using olfaction cues.

“Using that as a test case, we increased the number of samples, using additional control samples that were mixed with the positive cancer samples,” Foster says. “The dogs were reasonably accurate on that also and learned that procedure fairly quickly.”

In the third phase, the dogs faced multiple control samples and multiple positive cancer samples. “In that process, only one out of the group of dogs was able to meet criteria to detect cancer samples reliably versus the controls,” Foster says. “Though these were dogs that had been trained on scent detection before, this phase showed how the different components of what they were sniffing limited their ability to detect canine cancer and made a difference for individual dogs.”

In a fourth phase, a double-blind test was done using samples of control and cancer patient urine to which the dogs had not been exposed before. “With those trials, the dog's performance was not successful,” Foster says. “That was disappointing, but I think the main limitation was that the study was based on too few samples.”

It's possible that in the North Carolina State studies, the dogs were keying on individual dogs as opposed to whether a sample was cancerous or not, Foster says: “As our dogs were rewarded by dog to dog scent, we did not know what signal they were responding to.”

“I believe the capability of the dogs to detect different odors and learn tasks is amazing,” she says. “For dogs to detect either human or canine cancer, I think there's potential for advancing our understanding of early detection of cancers. Certainly, cancer is not uniform, and every type has different features. There will not be a universal cancer detection dog or cancer detection test. But we do think training dogs to scent-detect certain cancers would help us identify what components are similar across different samples. We could then use dogs as a key to establish better early diagnostic tests, both for human and canine cancer.” 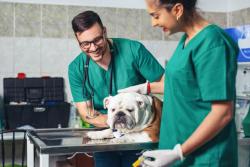