Schooling and book learning didn't prepare me for the emotional, communication and management headaches that come with the harried job of the veterinary hospital manager. Come sympathize with my agonies-or, better yet, learn faster than I did.

"I was promised a pellet if I did a SWOT analysis on the cost-benefit situation for a new habitrail." (Shutterstock.com)One of the things school didn't prepare me for was "dealing with crazy." I didn't have any real training on how to handle the emotions that go on in a veterinary hospital. Between the clients, the team members and the doctors, there were a lot of feelings that got in the way of effective communication. When I found myself emotionally burdened by employees' problems, I took that burden home with me and didn't sleep very well those first few years as a practice manager. It took me a long time to learn how to leave that stuff at work.

Here are some of the other things I learned from hard-knock life as a practice manager out of school.

I also dealt with a lot of "he said, she said," and I was constantly putting out fires amongst the team members. I felt like half my day was spent listening to one employee complain about another with no real resolution. Team members wouldn't talk to other team members they had conflict with, and they expected me to fix the problem. This was difficult, if not impossible.

I learned that to really fix staff problems, I needed them to be part of the solution. I started facilitating meetings between team members for honest discussions about their thoughts and feelings. In many instances, just one conversation helped team members learn how to connect with one another and resolve their issues. Sometimes, we needed a little more conversation. After a while, I learned how to effectively mediate conflicts and help others learn how to communicate with one another.

Another skill set I didn't learn in school was how to say "no."

Team members, clients and doctors used to bombard me with requests all day to take care of things for them. It never seemed to matter what I was doing-they just expected me to stop and take care of their problems. While many of their requests were valid, it was a struggle to balance my management duties with all the other work I had. And I was expected to help the team first and worry about my own work second.

But as I took on more management responsibilities, it was harder for me to finish my work when I was expected to stop everything to help the team. Since I was a salaried employee, I started working really long hours to get all my work done. I would stay at work long after we closed. Over time, this started to wear on me, and I began to feel burned out.

I started setting boundaries and even created "office hours" for the team to ask me nonurgent questions.

Eventually, I realized I wasn't completing my own work and I was starting to resent my team. I started setting boundaries and even created "office hours," when the team could come and ask me nonurgent questions during specific times. These changes helped my sanity and taught my team to respect my time.

I also learned how to delegate some of my own duties to qualified team members. This was extremely helpful in allowing me to get my job done and building confidence in those team members. Extra responsibility made them feel empowered to make a bigger impact on the hospital.

School also didn't prepare me to deal with bad attitudes. I found it difficult to manage team members who were constantly negative about everything at work. Sometimes when I asked them to do things, they'd give me attitude. It was hard for me to respond in those situations, because I didn't understand why they were so argumentative. It took me a long time to figure out how to address their negativity and turn it into something constructive.

First, I started holding them accountable for their attitudes. I brought it to their attention in the moment or escalated it in written warnings in their employee file. After a while that made an impact in the culture of the hospital. Once negative team members knew their attitude would no longer be tolerated, they started to change. In the beginning, a few employees quit, but most hadn't realized how their behavior affected the rest of the team, and they started to focus more on being positive.

When I was a new manager it was also hard for me to manage introverts. I'm an extrovert by nature and full of energy. I'm also very direct and open with my thoughts and feelings. This made it difficult to manage my more introverted, cautious team members. After a while, I realized I was intimidating them with my energy and directness. I learned to take a step back and approach them in a manner that worked better with their personality type. I lowered my voice and was aware of my body language. I also made an effort to spend more one-on-one time with them and find out their interests so I could talk to them about something they enjoyed.

School, strangely enough, also didn't properly prepare me to ask questions before reacting. In my first few years, if I found a mistake or someone came to me with a complaint about another team member, I was quick to criticize the mistake and react to the complaint. There were several times when I made the wrong decision because I didn't investigate further before acting. I needed to learn to stop and think about the complaint before responding. This was hard for me, because I like to make decisions quickly and don't always have a lot of patience. But I learned to slow down and approach the problem from a different point of view.

If an employee is asked to do something and doesn't, I don't assume why. I ask questions.

I learned to ask first: "I heard we had a situation with Fluffy. Can you tell me what happened?" Or if an employee is asked to do something and doesn't, I don't assume why. Instead, I ask employees if they knew the task assigned was assigned to them and why it wasn't completed. Many times, the task assigned wasn't clear or they didn't know they were assigned the duty. Giving everyone the benefit of the doubt first is the best way to go.

Ultimately, I sort of learned after a few years out of school that I needed a little more education. It took me a long time to figure how to be a better manager, and a big help was my former practice owner sending me to CE sessions.

I went to AAHA's veterinary management school as well as the practice management consulting firm VMC's School of Veterinary Practice Management. I started attending annual conferences. I found the VHMA and CVC (now Fetch dvm360) conferences extremely helpful in giving me the tools and information needed to be more effective in my job.

I also joined a local practice manager group and started attending their monthly meetings. It was really nice to hear that I wasn't alone and that others were experiencing some of the same difficulties. Over time, some of these other managers became my closest friends and colleagues. In 2011, I passed the Certified Veterinary Practice Manager (CVPM) exam with one of my colleagues, and it was a wonderful experience. I not only gained a tremendous amount of knowledge becoming a CVPM, but I also became a better leader.

"I didn't know what I didn't know" before I started studying for that exam. The same might be true for you on your journey to become, or grow, as a veterinary practice manager. Whether it's self-reflection, more and better communication, or formal schooling and CE, learning and changing can keep you from facing mid-career (or even early career) burnout in a job in the emotionally charged veterinary workplace.

Career advancement for the veterinary team 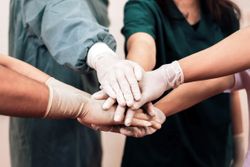 From surviving to thriving: The 4 P’s of positive leadership

The 5 building blocks of personal innovation