Katie James is an Associate Content Specialist for UBM Animal Care. She produces and edits content for dvm360.com and its associated print publications, dvm360 magazine, Vetted and Firstline. She has a passion for creating highly-engaging content through the use of new technology and storytelling platforms. In 2018, she was named a Folio: Rising Star Award Honoree, an award given to individuals who are making their mark and disrupting the status quo of magazine media, even in the early stages of their careers. She was also named an American Society of Business Publication Editors Young Leader Scholar in 2015. Katie grew up in the Kansas City area and graduated from the University of Kansas with a degree in journalism. Outside of the office her sidekick is an energetic Australian cattle dog mix named Blitz.

Educators at the HospitalDesign360 conference in Kansas City shared some of the scariest moments in their veterinary architectural careers, but luckily things turned out OK.

Speakers at the HospitalDesign360 conference in Kansas City, Missouri, gathered for a lively panel discussion Wednesday night, Aug. 21, to share their veterinary hospital design horror stories, with the caveat that the projects had to have a happy ending. Here are some of the favorites from the evening.

Heather Lewis, AIA, NCARB, a principal at Animal Arts in Boulder, Colorado, shared what she deemed a “dire and terrifying” story-one that's been happening more and more on projects. Mechanical units, such as heating and cooling units, are being manufactured overseas more and more (they used to at least get assembled in the United States). Now, once they arrive in the States, no one knows how they work-sometimes not even the technicians that work for the company they were made for, Lewis says.

On one of Lewis' projects, the building was completed, and the practice moved in during winter: “We were in New England, and nothing was working. It was 50 degrees in the building, and the practice kept calling service technicians over and over, and no one could figure out what was happening or how the system worked,” she says.

After going back and forth for months, Lewis decided to hire a commissioning agent.

“That commissioning agent is a go-between who can bridge the gap between engineering and construction, and they're amazing,” she says. “This one came on and solved the problem almost immediately, after back and forth for months with the manufacturer.”

Becky Gasser, NCARB, director of design for BDA Architecture in Albuquerque, New Mexico, had a horror story that ended up saving her client money-something that doesn't happen every day in veterinary design. The project was a three-story specialty practice in the construction phase that was three weeks away from the veterinarian moving in when Gasser got a call that the contractor realized he'd forgotten to order the elevator for the project.

“It was a huge setback,” Gasser says. “The doctor wouldn't be able to move in on time.”

So, the contractor called the elevator manufacturer, and it turned out they had good news. There was already an elevator in the same city that was sitting available, because it was the wrong elevator for another project. But it would fit Gasser's project.

“They ended up offering it to us for less money than the original elevator we wanted, because the finishes were a little different-for example, the doors were painted instead of stainless steel,” Gasser says. “So it ended up working out in the right time frame and saving us a little money.”

Security at the job site is an important consideration for your project, according to Vicki Pollard, CVT, AIA, of Animal Arts.

“I had a project in Los Angeles, and they didn't have enough security on site. The copper wiring was stolen out of the building,” she says. This happened not once, but two or three times before the contractor invested in 24/7 security guards.

One final story from Lewis that left people chuckling happened with flooring.

“I had a client who was impatient, and he wanted everything to happen as fast as possible, literally and figuratively,” she says. At his hospital, the contractor had just poured the epoxy flooring, but the doctor decided to lead a post-surgical dog through the epoxy.

After that, the veterinarian had to call the contractor and 'fess up to what he'd done, Lewis says. It was fixed, and the dog was OK in the end. 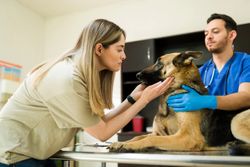