The veterinary debt-to-income ratio: Good news, but also a warning

A robust economy has helped this financial indicator trend in a positive direction. But for the health of the profession, more needs to happen.

Shutterstock.comAfter the 2016 Fix the Debt Summit, the American Veterinary Medical Association (AVMA) partnered with veterinary colleges, practice owners, professional associations, students and others to stop the growth of the debt-to-income ratio (DIR) and bring it down if possible. Strategies have included:

These tactical approaches are designed to either reduce veterinary debt or increase veterinarians' income.

So what's the big deal about DIR again? Here's a review

Total debt for 2016 graduates of U.S. veterinary colleges was estimated at $418 million. The total cost of education was estimated at $631 million for all 2,930 graduates. This included $403 million for tuition and fees and $228 million in estimated living expenses. The interest expense for borrowing these funds would have been an additional $70 million, bringing the total cost of the education to $700 million. However, students received some internal assistance and applied various outside funds to pay for some of these expenses; thus total debt was only 60 percent of the total cost. In 2015 total debt was 62 percent of total cost. See Table 1 for more detail.

What the economy means for veterinary DIR

The veterinary profession has considerable control over factors that affect the DIR-but it can't control the economy. Currently the U.S. economy is in an expansionary phase, and while we can't predict when the next economic contraction will occur, we can be sure that it will occur at some point in the near future. An economic contraction-also known as a recession-will adversely affect the DIR in two major ways.

First, state budgets and funds allocated to state universities will be reduced and this expense will be transferred to students, either through increased costs or increased numbers of students accepted into veterinary programs, which will reduce starting salaries. Second, consumer expenditures will decline during a recession. This will reduce the demand for veterinary services and consequently veterinary salaries. During a recession the DIR is likely to increase beyond trend levels.

We updated the DIR forecasts for 2017 to 2030 by adding to the existing data the actual debt, income, number of graduates and new veterinarians finding full-time employment in 2016. The new 2017 DIR forecast is lower, as is the rate of increase over time. This is a result of slower growth in debt for 2016 (approximately $2,000 less than forecasted) and a greater increase in starting salaries (approximately $1,500 more than forecasted). Other variables that made a favorable impact on the DIR projection were a higher percentage of new veterinarians finding full-time employment and the actual versus projected value of gross domestic product per capita.

A positive outlook, but action needed

This DIR outlook is positive: There was no growth in the DIR year over year, and the current forecast indicates a slower growth in the DIR than last year's forecast predicted. As much as we'd like to credit the Fix the Debt Summit for these encouraging changes, it's unlikely that they came about because of that initiative. The real story is that we're experiencing a more robust economy.

While we should be glad for this good news, there is cause for concern: The DIR hasn't declined even though the economy has been in an extended period of moderate growth. Because we're facing an increasing likelihood of economic contraction, we must start to see the DIR decrease during the economic expansion in order to guarantee the future health of the profession.

It's commendable that the profession has begun the conversation on the rising DIR, but let's not lose sight of the urgency of the situation. We need to implement both long- and short-term strategies quickly in order to avoid a problem that becomes too large to fix.

Dr. Bridgette Bain is an analyst in the AVMA's Veterinary Economics Division. Dr. Michael Dicks is director of the division. 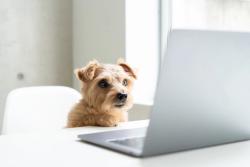