Veterinary practices have scant guidance on using the drug in dogs.

Little information exists on the use of insulin detemir for the treatment of diabetes mellitus in dogs.

The authors prospectively prescribed insulin detemir to 10 dogs with naturally occurring diabetes mellitus. The median age of the dogs was 9 years, and the median body weight was 21.1 lb (9.6 kg). Diabetes mellitus was diagnosed based on clinical signs, fasting hyperglycemia (> 200 mg/dl), glucosuria, and serum fructosamine concentrations > 340 µmol/L. Six of the 10 dogs were newly diagnosed; the other four dogs had been poorly regulated with porcine insulin for a median of five months.

Photo source: Getty ImagesDogs with recent administration of progestogens or glucocorticoids, as well as those with severe concurrent disease (e.g. hyperadrenocorticism), were excluded from the study. Dogs with diabetic ketoacidosis or pancreatitis were included once these issues were resolved.

All dogs were started on insulin detemir at 1 U/dog, which translated to a starting dosage between 0.02 to 0.13 U/kg, given subcutaneously every 12 hours for six months. The insulin dosage was adjusted as needed in increments of 0.5 to 1 U/dog. Dogs were reevaluated at one, two, four, 12 and 24 weeks, and a blood glucose curve, serum fructosamine concentration measurement and physical examination were performed at each visit. A diet low in simple carbohydrates and high in fiber was recommended for all dogs but was not required.

Parameters used to assess efficacy are listed in Table 1. A glucose curve nadir of 90 to 180 mg/dl and > 50% of the glucose concentrations between 90 and 270 mg/dl were considered ideal. Body weight stability (< 5% fluctuation), hydration and activity were also considered when assessing glycemic control.

The authors of the study note that the potency of insulin detemir in dogs requires using doses that are much smaller than the doses typically administered with other insulins. They posit that administration of these small amounts of insulin may be problematic for owners and may increase the risk of overdosage and hypoglycemia. These small doses also pose a challenge when dosage adjustments are required and, as a result, greater increases in dosing are often made.

The study authors recognize limitations of the study such as the small number of dogs enrolled as well as the lack of standardization of diet and exercise. The researchers hypothesize that inconsistency of the diet may also have contributed to the variable glucose nadir observed among dogs.

Hypoglycemia was a significant concern among dogs in this study and underscores the need for prudent use of this insulin. The authors recommend that the first-line insulin choice should be an insulin approved for use in dogs with diabetes mellitus (i.e. Vetsulin). For cases in which insulin detemir is being administered, the authors recommend using a detemir-specific insulin diluent to allow better control of dosing, particularly in dogs < 10 to 15 kg. They note, however, that this diluent is not readily available, so they recommend not using insulin detemir in dogs weighing < 10 to 15 kg.

Dr. Garcia's take: Also note that this was not a head-to-head comparison with other currently available insulin preparations used to treat canine diabetes. Conclusions as to which insulin will provide optimal control cannot be drawn at this time. 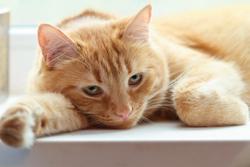 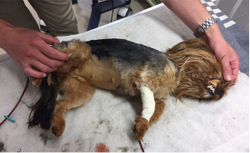 Repurposing common endocrine tests for use in canine critical illness 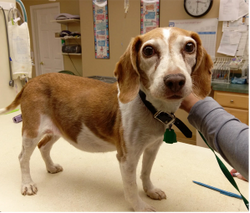 How to manage Cushing's syndrome