Two ways to mess up a limping puppy

Before deciding on treatment, before nailing down a surgery time, don't skimp on the radiographs with initial stabs at these two conditions, says Jennifer Wardlaw, DVM, MS, DACVS. a concierge surgeon at Gateway Veterinary Surgery in St. Louis, Missouri.

"You have a puppy limping on one leg, and people forget how often these are bilateral," she says.

Even if the patient isn't limping on the other side, closely examine the radiographs and include that in your orthopedic exams.

"Eighty percent of shoulders in OCD cases are bilateral," she says.

Wardlaw says she understands why clinicians jump to conclusions when they think they see HOD.

"You're comfortable with [seeing and diagnosing HOD], you're familiar with that, you see it on the long bones, you feel the pain," she says.

And the temptation may be to stop there, without taking all the radiographs you need to make sure it's HOD and not panosteitis.

"Without looking at that metaphysis, you're not gonna know," she says. And that's important, because you won't treat the two the same.

"A young dog can have a fever and feel bad, and it can absolutely affect the growth plates, which is going to give them a much poorer prognosis in the severe cases," she says. "Don't just assume shifting-leg lameness in a young dog is panosteitis."

Dr. Wardlaw covers it in the video below. 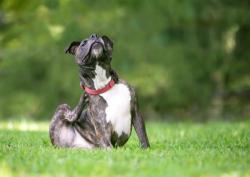