Dr. Larry Bramlage, MS, Dipl. ACVS, incoming president of the American Association of Equine Practitioners, humbly says he has no "grandiose" plans for his 2003-2004 term.

Dr. Larry Bramlage, MS, Dipl. ACVS, incoming president of the American Association of Equine Practitioners, humbly says he has no "grandiose" plans for his 2003-2004 term.

That's not to discount his charge to oversee the unveiling of the racetrack medication and testing consortium's recommendations for unified drug testing policy in racing nationwide.

Nor will Bramlage, who's practiced equine veterinary medicine for 28 years, brush aside efforts to maintain interest of veterinary students in equine practice. He's also bent on continually emphasizing internships as integral to the educational process.

And the changing face of the profession - incoming AAEP members are at least 70 percent women - won't be ignored, as long as Bramlage is in office.

"At the end of my term, I want to look back and say we made life a little better for veterinary members, especially the members most in need - racetrack practitioners, incoming women and recent graduates," says Bramlage, partner and orthopedic surgeon at Rood and Riddle Equine Hospital.

Topping his to-do list is helping establish a smooth process for the racetrack consortium's 2004 release of its drug testing recommendations for application in all states. The consortium, comprised of numerous constituents from the racing industry - regulators, drug testers, breeds, racetracks and veterinarians, is an outgrowth of a medication summit AAEP initiated two years ago.

"The goal is to make sure that the recommendations would be unified not only in the thoroughbred racing industry but also in the standardbred and quarterhorse racing industry," says Bramlage.

He plans to include racetrack veterinarians in discussions.

"We need to have their voice heard without derailing this process," he adds. "We don't want to have unnecessary bureaucracy. It is important that we make the life for the racetrack veterinarian as unencumbered as possible."

Bramlage, who spent 13 years on the faculty at The Ohio State University, is intent on building on the heels of success of a recent student-focused educational weekend in Lexington. The seminar, sponsored in part by Rood and Riddle Equine Hospital and touted as an introduction to equine practice, focused on championing equine medicine to incoming junior veterinary students.

The number of students interested in equine practice has gone down considerably in recent years. Bramlage says the problem exists in part because students have less opportunity to interact with veterinarians than in years past, because most students come from urban, not rural, backgrounds.

Many also associate equine medicine with economic myths. "What students don't know is to look down the line at career options and not only at starting salaries. Career options for equine practice as far as economics are higher than small animals," he notes.

Dovetailing with rallying student interest is the push for more internship opportunities.

"Equine practice is more like human medicine than any aspect of veterinary medicine in that you have a relatively complicated patient you are not totally equipped to treat immediately out of veterinary school," Bramlage explains. "You need to get some experience with another person looking over your shoulder."

That's the genesis of AAEP's internship program, which Bramlage plans to keep at the forefront.

The association, mirroring the profession, continues to undergo gender change, as membership is nearing 50 percent women.

The reality, says Bramlage, is "there will be, in the near future, a majority of women rather than men, but you've got a bunch of middle-aged white men making decisions." While AAEP has no specific plans to address gender specifics, he stresses the importance of being "in tune" with increasingly diverse needs of membership, such as the priority now placed on family life.

"We just have to keep our eye on the ball," he says.

Another sensitive issue, compounding, has warranted inclusion into a session at the annual meeting this fall.

While Bramlage says it's necessary to educate veterinarians on the hazards of compounding and lack of quality control, he cites a deeper issue. "If we don't allow drug companies to recoup costs in production of equine pharmaceuticals, you won't have any drugs for horses," he says.

Bramlage foresees a strong future for equine veterinary medicine, if only because the number of horses in the population keeps growing.

"There are as many horses in the United States now as there ever have been," Bramlage notes. "Whenever you have a growing interest plus the growing ability with medicine and surgery to care for more diseases, long-term outlook has to be really good."

Bramlage, when able to set aside his duties at AAEP and at Rood and Riddle Equine Hospital, has started developing a small 100-acre farm with a partner.

He's married to Marilyn and has a son studying to be a mechanical engineer and a daughter in law school. 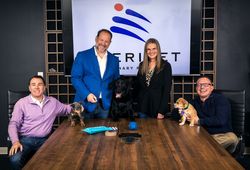