Portuguese water dogs: Roll out your own campaign featuring this presidential pup

Bo Obama inspired many to adopt a member of this brainy dog breed. Use these Facebook posts and tweets to engage these dog owners.

First Dog, Bo, on the South Lawn of the White House. (Photo by Shutterstock/Frontpage) The 2016 election has officially concluded, reportedly with no new First Pet to be. No matter how the contest turned out, we knew that soon we'd have to bid “Tchau” to the current First Dog and likely the most famous Portuguese water dog, Bo Obama. Celebrate this increasingly popular breed by sending out these posts and Tweets as part of a Breed of the Month theme in your social media channels with these premade Facebook posts and tweets, courtesy of Shawn Finch, DVM.

On Portuguese water dogs-“They have a can do and hopeful spirit, they are smart, they are resilient, they are determined, they are optimistic, and they are tireless. They're loyal, smart, loving and they become a real part of the family.”-Ted Kennedy

Portuguese water dogs are very intelligent and very active! They tend to love water and retrieving. And they do well in obedience and agility and are great service dogs.

Perhaps the most famous Portuguese water dog, Bo the “first dog” on the cover of the New Yorker! http://www.flickr.com/photos/artcafepix/3459917951/

Lysosomal storage disease is a uniformally fatal genetic disease in Portuguese water dogs caused by an enzyme deficiency. This deficiency results in excessive build-up of harmful materials in nerve cells, which become swollen and unable to function. Tremors and seizures begin as young as 2 months of age, and death occurs by 8 months of age. A DNA test available through #NYU detects normal, carrier and affected dogs. By not breeding carriers to each other, the disease has been almost entirely eliminated from the breed! http://www.pwdca.org/gm1

Juvenile dilated cardiomyopathy, or #DCM, in Portuguese water dogs is a rare condition similar to DCM in Dobermans but occurring at a much younger age–5 weeks to 7 months. And it is always fatal. A genetic test has been available since 2007, made more accurate in 2010 by researchers at the University of Pennsylvania. The disease has been virtually eliminated from the breed by not breeding carriers.

Portuguese water dogs develop hypoadrenocorticism-Addison's disease-more often than dogs overall. If you have a dog with Addison's disease, http://www.addisondogs.com/ is a great resource.

Each of 11 committees involved with the Portuguese Water Dog Club of America is focused on a different aspect of Portuguese water dog health. http://www.pwdca.org/health-conditions

Portuguese water dogs were first bred in Portugal to help w fishing, working in water, on shore & in ships. #BreedOfTheMonth

As early as 1297 a monk wrote in his journal of a Portuguese water dog saving a drowning man. #BreedOfTheMonth 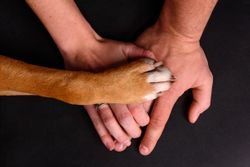