APOP to create veterinary coalition to combat client misperception in the face of super-obese pets.

Despite best efforts to get the message out about the negative effects of obesity on pet health, research by the Association for Pet Obesity Prevention (APOP) reveals that the number of obese pets has not budged in the last year. The association’s annual obesity prevalence survey found that 57.6 percent of cats and 52.6 percent of dogs were recorded as overweight or obese—results that mirror the previous year’s numbers.

Osteoarthritis, type 2 diabetes, heart disease, joint injury, cancer and decreased life expectancy are all linked to obesity in pets. “The body of evidence indicating that obesity causes costly and painful conditions is clear,” says Joe Bartges, DVM, a veterinary nutritionist and internist who serves on the APOP board and is head of the Small Animal Clinical Sciences Department at University of Tennessee Knoxville’s College of Veterinary Medicine. “Without the obesity risk factor in place, the likelihood of pets getting many serious diseases is inarguably reduced.”

Veterinarians understand the impact obesity has on pet health. APOP founder Ernie Ward, DVM, says the problem isn’t in the message but the target. “We’re doing a good job with the message,” Ward says, “but we’re still missing the average pet owner.”

And he says reaching that pet owner is more important than ever. “We’re seeing an increase in what we’re defining as ‘super-obese’ pets,” Ward says. As in double the normal weight of an animal’s breed and species. “These super-obese pets seem to be growing at an alarming rate.”

In an effort to move the obviously heavy needle toward leaner, healthier pets, Ward and APOP are assembling an industry coalition to take the message to the people. While Ward is not yet ready to reveal the companies and manufacturers signed on to the project, its mission will be twofold: to raise awareness and create actionable tools to combat the pet obesity epidemic.

Ward says not only is it sometimes difficult for pet owners to recognize pets as overweight, it can be difficult for veterinarians as well. He says survey results show participants recording a 16-lb domestic shorthair cat as a normal weight. “We believe that there is gross underreporting of obesity,” Ward says.He wants to help correct the estimated 7 to 10 percent gross reporting errors. “We’re developing tools for veterinarians to better assess the normal weight of pets,” he says.

A standardized assessment may also help when it comes to what APOP calls the “fat gap.” The organization reports that among all participating pets classified by veterinarians as obese, 93 percent of dog owners and 88 percent of cat owners initially thought their pet was in the normal weight range. This misperception is the “fat gap.”

“The fat gap is rampant and we believe it’s the primary factor in the pet obesity epidemic,” Bartges says. He contends that knowledge gaps also include the basics of how much food pets should get daily. “There’s an entire nation of pet owners who are loving their pets to death with too many calories and not enough exercise. They are in the dark that their pets are overweight and that a host of diseases can arise as a result.”

However, an online poll conducted by APOP found that while 42 percent of dog and cat owners admitted to not knowing what a healthy weight for their pet looked like, 72 percent of pet owners do believe that obesity causes a decreased lifespan in pets. “There have been many news headlines about obesity causing grave diseases and conditions in humans, and I believe most pet owners are aware of this, so they associate the same risks with their pets,” Bartges says. “But until more pet owners recognize that their pet is in the obesity danger zone, we can’t expect them to make changes.” 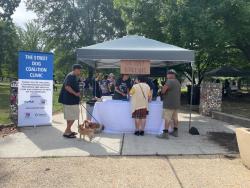