That salary puts the Tuskeegee University alumnus in line with just 2 percent of the 1,773 2006 graduates who participated in the American Veterinary Medical Association's (AVMA) annual salary and debt survey. When it comes to student loans, Vareli's balance mirrors the debt of nearly 17 percent of the nation's newest DVMs. According to the study, published in the Oct. 1 issue of the Journal of the American Veterinary Medical Association (JAVMA), 45 percent of his classmates surveyed owe $100,000 or more.

Yet Vareli's good fortune doesn't end there. According to additional AVMA survey results released Oct. 15 in JAVMA, the small animal practitioner also out-earns his female counterparts. While starting salaries and benefits rose across-the-board, they increased more for male DVMs. The mean starting salary in 2006 for men in private practice totaled $56,772 while women went to work for $2,000 less.

Vareli offers no explanation for the inequity: "I think I'm making more than average compensation-wise, and compared to female graduates, that just doesn't make sense."

Dr. Michael Reardon, director of admissions for Virginia-Maryland Regional College of Veterinary Medicine offers a few ideas. Economics aside, the study, he says, fails to account for intangible factors that might offer insight on why a female graduate might choose a job. Although the survey reports 28.1 percent of male graduates receive individual retirement account benefits versus 22.1 percent of female graduates, women in the study might not have held out for more fringe benefits due to flexibility, location or relationship issues.

"I think the intangibles are one of the things we wrestle with when doing these types of surveys," he says. "What are the other reasons they took the job, outside of money? There's no reason why women can't earn what men do from an education and competency standpoint."

Still, male respondents in small animal exclusive practice earned more than their female counterparts by roughly $3,000. Faced with the apparent inequity, Reardon admits there appears to be some social, possibly inherent differences between the genders.

"Part of it is women seem to have a harder time asking for more professional compensation," he says. "I don't understand why because it's a female dominated pool of employees right now. All the women have to do is hold out for it. It's not like they're going to find a guy to take the job; they're 85 percent of the graduating class. I just don't think they push as hard as they can."

Another reason why the study's numbers tilt in mens' favor is more women take part in their spouses' insurance programs, forfeiting their own and making their salary packages appear less, he adds.

Reardon, who's watched veterinarians' salaries and debt rise for 15 years, says the survey results offer no surprises, including the fact that women reportedly hold more educational loans than their male counterparts in veterinary medicine. Out of 1,750 respondents, 65.7 percent reported debt greater than $80,000. Mean debt increased 13.5 percent from 2005 to 2006, rising to $100,805. By comparison, debt increased just 9.6 percent from 2004 to 2005.

The gender breakdown reveals mean debt was $95,486 for male veterinarians versus $102,420 for females.

Reardon chalks the difference up to greater preparedness among male students. Of those who accumulated no debt, men made up .2 percent more of the survey's 2006 graduate respondents, totaling 11.5 percent.

"I'm not shocked by that finding," he says. "Many of the men who come in have appeared to plan ahead more. We're probably are seeing that men have worked a little more, and that purely might be what it is. Everyone's tuition is the same. It's about how much it costs a student to live in a way he or she is comfortable with."

Back on salary, 2006 graduating veterinarians in all employment types earn just $45,546 — a far cry from those reporting large animal and uniformed service careers, which command roughly $60,000 a year.

While 78 percent of the 2006 graduating class responded to AVMA's questions, a disproportionate number of respondents in the advanced study category drove the numbers lower, Reardon contends. According to the results, those in advanced study earn a mean salary of $25,496 a year.

"One out of three people reported in the survey were in that category," he says. "I think that's high if you looked at the class that graduated and stems from the fact that those in advanced study were more likely to fill out the survey questionnaire." 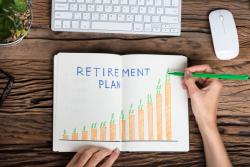