Pulmonary fibrosis can be secondary to an underlying disease, or primary (idiopathic). Causes of secondary PF (elucidated in human medicine) include inhalation of environmental pollutants, radiation therapy to the chest, certain medications (e.g. Bleomycin, amiodarone, nitrofurantoin), pulmonary infections and connective tissue disorders. Recently focal PF secondary to aerosolized chemotherapy has also been reported in dogs; although without clinical consequence. Pulmonary fibrosis is becoming increasingly recognized in veterinary medicine associated with increased awareness of the disease and the availability of more advanced respiratory diagnostics. Most cases in veterinary medicine are primary / idiopathic.

It seems that, at least in West Highland White Terriers (WHWT), PF is a manifestation of aberrant collagen regulation. This may be a result of increased synthesis of collagen matrix, or decreased lysis / degradation (remembering that synthesis and degradation of collagen normally occurs throughout life, and is tightly controlled).

Idiopathic PF (IPF) is best characterized in WHWT, but is also recognized in a variety of other dog breeds (mostly terriers) and cats. Staffordshire Bull Terriers are another predisposed breed. While there is apparently a genetic basis of the disease, the mode of inheritance and pathogenesis is unknown.

History is can includes tachypnea, overt dyspnea, and/or orthopnea, chronic cough (non-productive), exercise intolerance, collapse and even cyanosis. The cough does tend to be less pronounced than in dogs with chronic bronchitis (CB).

In contrast to CB, cough is slight or absent (unless concurrent CB) but these dogs have marked tachypnea and loud pulmonary crackles (most evident ventrally on inspiration with “Velcro” quality). Additionally you may auscult a sinus arrhythmia, a loud S2 or other signs of pulmonary hypertension.

Older dogs, particularly Terriers, with signs of exercise intolerance or rapid breathing should be considered candidates for further evaluation of PF. Fibrosis is commonly mistaken for CB or CHF.

Thoracic radiographs may reveal a generalized, bilateral, ‘heavy' interstitial pattern (without consolidation or mass), however near normal radiographs do not rule out IPF. Right sided cardiomegaly (secondary to pulmonary hypertension) is occasionally present.

Echocardiography is useful to document pulmonary hypertension that may represent an additional therapeutic target. The existing studies document PHT in at least 40% of dogs with IPF. PHT can be assessed both qualitatively and quantitatively using echo. Qualitative echocardiographic abnormalities consistent with PHT, evident on B and M mode echo, include right ventricular (and atrial) dilatation, thickening of the right ventricular free wall, paradoxical motion of the interventricular septum, and decreased size of the left ventricular lumen.

Additionally, PHT can be quantified using Doppler echocardiography. Assuming the presence of a tricuspid regurgitant (TR) jet (and the absence of pulmonic stenosis); the pulmonary artery systolic pressure correlates with velocity of the TR. Using this velocity value in the Bernoulli equation, allows estimation of the pulmonary artery pressure during systole. A tricuspid pressure gradient of >30mmHg (Vmax > 2.8m/sec) is suggestive of systolic PHT.

High-resolution computed tomography (HRCT) is the standard of care for evaluation of people with suspected PF, and would likely be performed in a referral hospital setting. Classic HRCT abnormalities associated with PF (in order of decreasing frequency in WHWT) include ground glass opacities (GGOs), traction bronchiectasis and honeycombing. GGOs are multifocal increases in lung opacity that do not obscure the underlying pulmonary vasculature. GGOs have been present in all dogs with PF in all veterinary studies that report CT findings. Bronchiectasis refers to irreversible bronchial dilation.

Traction bronchiectasis refers to dilated bronchi with irregular margins. Bronchiectasis can be diffuse, but is usually localized or multifocal in dogs with IPF. Honeycombing refers to the presence of air-filled cystic structures within the lungs that are often peripherally located and variable in diameter (mm to cm).

CT has much better correlation with physiologic dysfunction than thoracic radiography. Pulmonary function testing is also used to support a diagnosis of pulmonary impairment, however collection of arterial blood gases is challenging, especially in small, dyspneic dogs. Dogs with PF have profound hypoxemia and increased A-a gradients.

Bronchoscopy and BAL are unlikely to be helpful but are usually performed for the sake of completeness and to exclude other diseases. Bronchoscopic abnormalities are non-specific and may reflect concurrent disease. Abnormalities can include mucosal irregularity (may be seen in normal dogs), tracheal collapse, bronchial mucus accumulation, bronchiectasis and bronchomalacia. The lower airway cytology in dogs with IPF usually reveals an increased total cell count (the inflammation occurs secondary to fibrosis, not vice-versa).

In one study, while total cell counts (TCC) and absolute differential cell counts were increased, the relative percentages of macrophages, neutrophils, and mast cells, were not different to control dogs. Interestingly though the TCC and % of these cells negatively correlated with PaO2 (albeit weakly), perhaps suggesting that severe inflammation may worsen the hypoxemia. Lower airway fluid (BALF) can be submitted for culture, although results are negative in dogs with IPF. Nonetheless secondary bacterial infection could occur

Lung biopsy is required for definitive diagnosis, however rarely performed in veterinary medicine due to associated costs, inherent risks and the inability of histopathologic (HP) findings to facilitate more effective therapy at this time. Samples for HP can be obtained via an open approach (thoracotomy), with key-hole thoracotomy or thorascopically. Histopathology of WHWT with IPF is characterized by expansion of the pulmonary interstitium with eosinophlic, trichrome staining, extracellular matrix (ECM), that can either be diffuse or regional. IHC confirms the ECM is both type I and predominantly III collagen.

The collagen expands the interstitium down at the level of the alveolar septa, and is reported to have concentric distribution around alveolar capillaries. The presence of the matrix increases the distance between alveolar epithelial cells and pulmonary capillary endothelial cells at the blood-air interface. A mixed inflammatory infiltrate (lymphocytes, macrophages and plasma cells) is also usually present, but of variable severity (scant to marked). Other reported abnormalities include type II pneumocyte hyperplasia, prominent intra-alveolar macrophages and emphysema. Interestingly the HP of WHWT with IPF is not identical to IPF in people, nor does it fit nicely into any of the human categories of IPF.

Treatment is limited to supportive care (oxygen, removing any potential inciting cause) with or without glucocorticoid therapy, bronchodilators, antitussives, and therapy for pulmonary hypertension. No controlled studies have been performed in dogs, hence no evidence based recommendations are available.

Oxygen supplementation is really the mainstay for the acute treatment of dogs with PF. Not only does oxygen supplementation (via cage or nasal oxygen) improve the hypoxemia, it also results in pulmonary vasodilation and ameliorates pulmonary hypertension. Interestingly chronic oxygen therapy can even reverse some of the structural changes that occur in the lungs in animals with chronic PHT. Late stage PF is an oxygen dependent state; and thus disease may progress to the point that we would recommend an oxygen cage at home for dog owners wishing to pursue treatment.

Given the limited treatment options available for PF, corticosteroid therapy is usually tried. However as mentioned above, any inflammation that occurs is only secondary to the fibrosis, and while steroids may reduce the inflammation, they are unable to reverse the fibrosis.

Some advocate immunosuppressive doses of glucocorticoids for interstitial lung diseases, however the author does not routinely immunosuppress these patients given no evidence for such an approach. I usually just stick to anti-inflammatory doses of prednisone (0.5-1mg/kg/day PO).

While bronchodilators are not specifically indicated for dogs with PF, theophylline may have some benefit in the treatment of dogs with PHT secondary to PF. Methylxanthines are phosphodiesterase inhibitors (PDEI), increasing cAMP and promoting smooth muscle relaxation and vasodilation (via increased PKA).

Antitussives can be used in dogs with a history of cough, for symptomatic relief. Hydrocodone and butorphanol are used most commonly. Sedation is a common side effect, however this may be beneficial if coughing is triggered by excitement

Sildenafil (1-3mg/kg PO q 8-12 hours) is indicated for dogs with significant pulmonary hypertension. Sildenafil increases cGMP and promotes NO mediated vasodilation. While sildenafil is very effective, it is cost prohibitive for some / many owners.

Prognosis is guarded; many dogs die or are euthanized due to progressive pulmonary failure and associated respiratory distress within 12-18 months. Prognosis is grave for dogs that are oxygen dependent at first diagnosis, but lesser affected dogs may have a markedly prolonged survival. 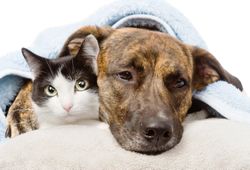 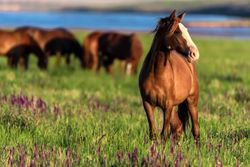