New numbers on pet expenditures show growth almost across the board, with Americans spending $72.56 billion in 2018.

According to the American Pet Products Association (APPA), Americans spent $21 billion on their pets in 1996. A mere two decades later, spending had more than tripled to $66.75 billion. In 2018 pet owners outspent themselves again, shelling out a whopping $72.56 billion on pet care and related services, according to an APPA press release, with no signs of slowing down anytime soon.

More money is spent on pet food than any other category, accounting for $30.32 billion in 2018. The second largest category was veterinary care, for which $18.11 billion was spent, followed closely by pet supplies and OTC medications at $16.01 billion. Bringing up the rear for 2018 spending were “other” services (such as grooming, boarding, training and pet sitting) at $6.11 billion and live animal purchases at $2.01 billion.

APPA released these new figures at the 2019 Global Pet Expo in Orlando, Florida, this month, including its prediction that pet spending will rise by another 4 percent this year, reaching an estimated $75.38 billion in 2019.

Driving the growth are two overriding factors: the humanization of our pets and the way millennials pet parent. The largest pet-owning demographic, millennials are prepared to spend beaucoup bucks for the best-quality products and services they can find to maintain the health and well-being of their pets. “Today more than ever, pet owners view their pets as irreplaceable members of their families and lives, and it's thanks to this that we continue to see such incredible growth within the pet care community,” says APPA president and CEO Bob Vetere in the release.

Aside from the fact that more Americans own pets than ever before-and those pets need to eat-increased spending in the pet food category is thought to be due more to pet owners' desire to feed higher-priced, premium foods than to more food being sold. Vetere says continued growth in this category will stem from “opportunities that reside in specialized diets, targeting the aging pet population and pets with unique dietary needs.” Also contributing to anticipated increased spending in this category are fresh food options and subscription delivery programs.

At $18.11 billion, the increased spending on veterinary care in 2018 surpassed growth in any other category. “The frequency of vet visits has likely increased as well,” according to the release, “thanks to lower prices, making care more accessible to a broader audience.” 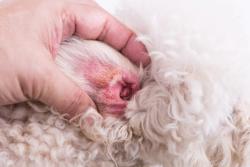 Study reveals Zymox Otic Plus is beneficial and effective