How the stethoscope stepped into history

When you think of a doctor, odds are you picture someone with a stethoscope draped around their neck. A mere 200 years old, this tool is ubiquitous in both human and veterinary medicine today. Heres the 411 on how it came to be.

As with many great inventions, the stethoscope was created out of a simple need. In the early 19th century, doctors listened to a patient's heartbeat and breath sounds by placing an ear directly to the patient's chest or back. For obvious reasons related to female patients and male doctors, this method of examination could make for an awkward encounter.

When confronted one day with an overweight female patient with heart trouble, French physician Rene Laennec not only felt awkward using the traditional method, but he also believed that he would not be able to hear his patient's heartbeat adequately. So, he rolled a piece of paper into the shape of a cylinder, tied it with string and placed one end on the patient's chest and the other to his ear. To his delight, Laennec found that the tube magnified the acoustics of the heartbeat and, voilà, the stethoscope was born and the practice of medicine was forever altered.

In his own words

After Laennec presented his findings at the Académie de Médecine in 1819, use of the stethoscope was rapidly adopted by physicians across Europe and the United States. Before his death in 1826 at age 45, he called his invention ‘the greatest legacy of my life.' He described its origins in his book De l'Auscultation Médiate [On Mediate Auscultation]:

“I was consulted by a young woman laboring under general symptoms of diseased heart, and in whose case percussion and the application of the hand were of little avail on account of the great degree of fatness. The other method just mentioned [direct auscultation] being rendered inadmissible by the age and sex of the patient, I happened to recollect a simple and well-known fact in acoustics, … the great distinctness with which we hear the scratch of a pin at one end of a piece of wood on applying our ear to the other. Immediately, on this suggestion, I rolled a quire of paper into a kind of cylinder and applied one end of it to the region of the heart and the other to my ear, and was not a little surprised and pleased to find that I could thereby perceive the action of the heart in a manner much more clear and distinct than I had ever been able to do by the immediate application of my ear.”

Intent on improving his invention (initially dubbed the ‘ear trumpet'), Laennec soon built a portable version that he could use for all of his patients. The first iteration was a hollow wooden cylinder measuring about 25 cm long by 3 cm in diameter, which Laennec later altered to consist of three detachable parts. He called his creation the stethoscope from the Greek words ‘stethos' (chest) and ‘skopos' (examination) or ‘skopein' (to explore).

Beyond the ear trumpet

Over the years, many modifications were made to improve the efficiency of the original stethoscope design, such as making one end the shape of a bell to transmit low-pitched sounds, making the chest piece flatter and covering the end with a diaphragm of parchment or ivory. Materials included wood of various types, glass, ivory, silver, pewter and brass. Physicians who catered to the poor often used an extra-long stethoscope (35 cm) so they could examine unclean, flea-ridden patients without having to get too close.

In 1840, British doctor Golding Bird created a version of the stethoscope with a fully flexible tube that he called the ‘snake ear trumpet.' A decade later, Irish physician Arthur Leared invented a version that fitted into both ears. Made of a tough plastic substance called gutta-percha, this first binaural stethoscope was displayed at the Great Exhibition in London in 1851.

The following year, New York doctor George Cammann adapted a stethoscope design for commercial production. Cammann's version-which he never patented because he believed the instrument should be freely available to all physicians-was constructed with ivory earpieces connected to silver tubes held together by a simple hinge joint, with tension provided by an elastic band. Attached to these were tubes covered by wound silk that joined a hollow ball designed to amplify the sound from the conical shaped, bell chest piece.

In the early 1960s, Harvard professor David Littmann created a version that was lighter than previous models and had improved acoustics. It is this version that is used throughout much of the world today. 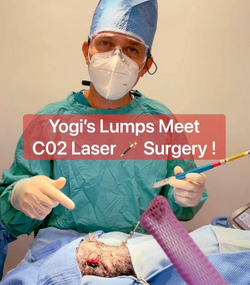 Light it up: Laser surgery in veterinary medicine