Fluoride: It's not just for humans anymore!

Are you using topical dental fluoride treatment to benefit your veterinary patients' teeth?

Embrace fluoride's benefits for all of your clients' kids. (Getty Images)Just as children benefit from early fluoride treatment, dogs and cats in their first 18 months of age will also benefit from this practice. In fact, one of the most important juvenile veterinary dental services for otherwise healthy puppies and kittens is treating the newly erupted adult teeth with topical fluoride.

Because dogs and cats lose their deciduous teeth in the first six months of life, while children have baby teeth for eight years, in animals, you only need to treat your patients' adult teeth with fluoride. At 6 months of age, most juvenile pets will have completed their transitional dentition and all of the adult teeth will have erupted.

Ideally, this treatment would occur when most patients are anesthetized for spaying or neutering, near the age of puberty. Perform careful occlusal re-evaluation and dental prophylaxis with subgingival curettage and polishing before applying a fluoride treatment. A remarkable number of dogs and cats will have calculus, especially on their caudal (back) teeth at 6 months of age.

Now you are ready to apply a 1.23% solution of fluoride to all exposed surfaces. Leave the fluoride on the teeth for five minutes, and then wipe it off with a gauze pad. Note that the fluoride is not rinsed off, but wiped so a protective residue is left on the tooth's surface. It is important, after five minutes, to wipe all excess fluoride off because the solution is very acidic, with a 3.0 pH, and can cause gastric upset and esophageal irritation if swallowed. Because of this acidity, it is also important to have an endotracheal tube in place during the procedure to avoid aspiration of the product.

A fluoride treatment will benefit newly erupted teeth by making the crown surface more impervious to infection and making it a harder and smoother surface. Chemically, enamel is hydroxyapatite and is composed of approximately 95% inorganic material, contributing to it being the hardest tissue in the body. By comparison, dentin is comprised of approximately 70% inorganic material and is more porous than enamel. Topical fluoride treatments are composed of fluoroapatite crystals, which are similar but larger, less reactive, and with less soluble components than hydroxyapetite and replace the organic portion of the enamel, thus making the surface of the tooth more impervious to caries (bacterial invasion).

Fluoride application will aid your patients most during their first two years, while the teeth are still developing. After 18 months of age, topical dental fluoride treatment is only indicated in patients that have periodontal disease to help desensitize exposed roots.

Why cavities aren't a common problem in pets

You know that dogs and cats have caries less frequently than people. But why? For one, most of their teeth are sectorial in design, built for shearing and tearing rather than grinding. Also unlike people, our veterinary patients generally do not pack food between their teeth, because most dog teeth and all cat teeth are conical in shape and tend to shed food rather than pack it between teeth and gums. In addition, the average pH of a cat or dog's saliva is 7.5, compared with 6.5 in humans. A pH of 7.5 discourages the growth of the cariogenic bacteria Streptococcus mutans and Bacillus acidophilus, which need an acidic environment to survive.

Another reason why dogs have few caries is that the urea content of their saliva is markedly higher than it is in people. Thus, the teeth are constantly bathed by ammonium carbonate, an excellent acid-neutralizing agent.

Despite these natural defense mechanisms against caries, a fluoride treatment is still indicated for an extra measure of protection, because caries, when they do occur in dogs and cats, most often occur on the flat occlusal surfaces of the upper and lower molars and the proximal (interdental) surfaces of the incisors, where food can more easily be trapped.

Oh Papa! “In my teenage years, in 1959, at the Festival of San Fermin, in Pamplona, Spain, I met Ernest Hemingway and swapped botas with him-a tradition in which you toss your goat skin pouch sealed with pitch and filled with wine to your acquaintance or friend, and, at arm's length, each squirts the wine around his nose and it runs down into the mouth. I was there running the bulls in that famous year of the mano a mano in which world's Numero Uno, The Great Dominguín, was defeated by his brother-in-law, Antonio Ordóñez. I have Ordóñez's and Hemingway's autographs on a bullfight ticket.” 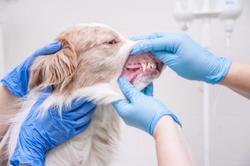